What do these forests make you feel? They are profoundly solemn yet upliftingly joyous… How absolutely full of truth they are, how full of reality. The juice and essence of life are in them; they teem with life, growth and expansion. They are a refuge for myriads of living things…
– Emily Carr

What do these forests make you feel? They are profoundly solemn yet upliftingly joyous… How absolutely full of truth they are, how full of reality. The juice and essence of life are in them; they teem with life, growth and expansion. They are a refuge for myriads of living things…
– Emily Carr

EMILY CARR’S work as an artist, writer and environmentalist captured not only the importance and beauty of Canada’s forests, but also their complexity. Her painting and writing communicated strong messages about forest diversity and resilience, and starkly illustrated the effects of poor forest stewardship. Nearly a century later, we are still seeking the appropriate balance between economic and ecological factors, made all the more challenging by climate change.

Canada’s forests account for nine per cent of all forests and 24 per cent of boreal forests worldwide. They buffer the world from rapid climate change by removing carbon dioxide from the atmosphere and moderating local climate, water flow and air quality. Our forests are home to two-thirds of all our species and are the source of more than 65 per cent of our water. Except for the past two decades, forests have been our primary sinks for greenhouse gases. Over 70 per cent of our Aboriginal communities reside in forested areas that are foundational to their cultures and ways of life. In 2013, forest harvesting contributed $19.8-billion to the nation’s GDP and directly employed 216,500 people.

Canada’s forests are home to two-thirds of all our species and are the source of more than 65 per cent of our water.

But Canada’s forests are under siege by resource extraction and shifts in the types and extent of natural disturbances due to climate change. This is starkly revealed in the federal government’s own State of Canada’s Forests report, which shows that 3.9 per cent of our forests were disturbed in 2013 by insects, fire and logging, and for economic development. This is roughly four times the rate of disturbance expected for sustainable forest management. Government scientists expect the effects of climate change on forests to amplify with time.

In 2014, Canada made embarrassing headlines when the World Resources Institute (WRI) reported that we have accounted for 21.4 per cent of worldwide forest degradation over the past 13 years, the highest rate globally. The tar sands of Alberta, along with increased forest fires, were highlighted as major drivers of this degradation. The State of Canada’s Forests report paints a rosier picture, but the WRI, an independent watchdog, has made clear that Canada’s forest policies and practices focus on economic growth at the expense of environmental sustainability. Such single-minded management in this era of rapid climate change could undermine the natural resilience of our forests.

Although change in forests is normal, people are now causing change at much faster rates than in the past. Climate change caused by human activities has lengthened summers and increased drought, creating the fuel and weather conditions for earlier, more frequent and more severe forest fires. This is obvious to the locals in British Columbia, Yukon and Northwest Territories, who, in recent years, have experienced some of the driest and smokiest summer conditions in recorded history.

Forest management practices narrowly focused on wood production are placing forests at increased risk of degradation as the climate changes.

Warming temperatures have also created ideal conditions for massive insect and disease outbreaks. Mild winters allowed populations of the tiny mountain pine beetle to explode in British Columbia. Imagine the shock for people in forest-dependent communities like Quesnel, BC, as they watched their pine-dominated landscapes turn from green to red as trees were infected, then to grey as trees died in just a few years. Not only did these people lose the beauty and recreational value of their forests, they lost the economic value too; Quesnel is on the cusp of economic collapse due to timber shortages for local mills. The mountain pine beetle is now chewing its way across the boreal forests of Alberta and Saskatchewan. Other native and introduced insects and diseases threaten to follow suit, particularly in forests lacking diversity or planted with species unsuitable for ecological conditions.

Provincial governments in Canada have responded to the mountain pine beetle mainly through salvage logging. New forest policy to facilitate salvage logging has resulted in increased harvest rates, but this has had unintended consequences, including the cutting of healthy understory and neighbouring trees, further reducing future timber supply. According to the Food and Agriculture Organization of the United Nations, such forestry practices, along with land-use change, accounted for 15.5 per cent of Canada’s greenhouse gas emissions in 2011.

The good news is that beetle-killed forests that have not been salvage-logged quickly recover as carbon dioxide sinks rather than sources. This is because formerly shaded trees are able to capture light and other resources liberated by their dying competitors, demonstrating nature’s resilience. The salvage-logged forests that have been replanted or are naturally regenerating can once again become carbon sinks in a few decades if the new generation of trees remains healthy. Likewise, reforestation with species adapted to new conditions will result in more rapid forest recovery. If Canadians promote ecologically sound reforestation of the remaining millions of hectares naturally disturbed by pests and fire, net greenhouse gas emissions from our forests and other land-use changes could be reduced. 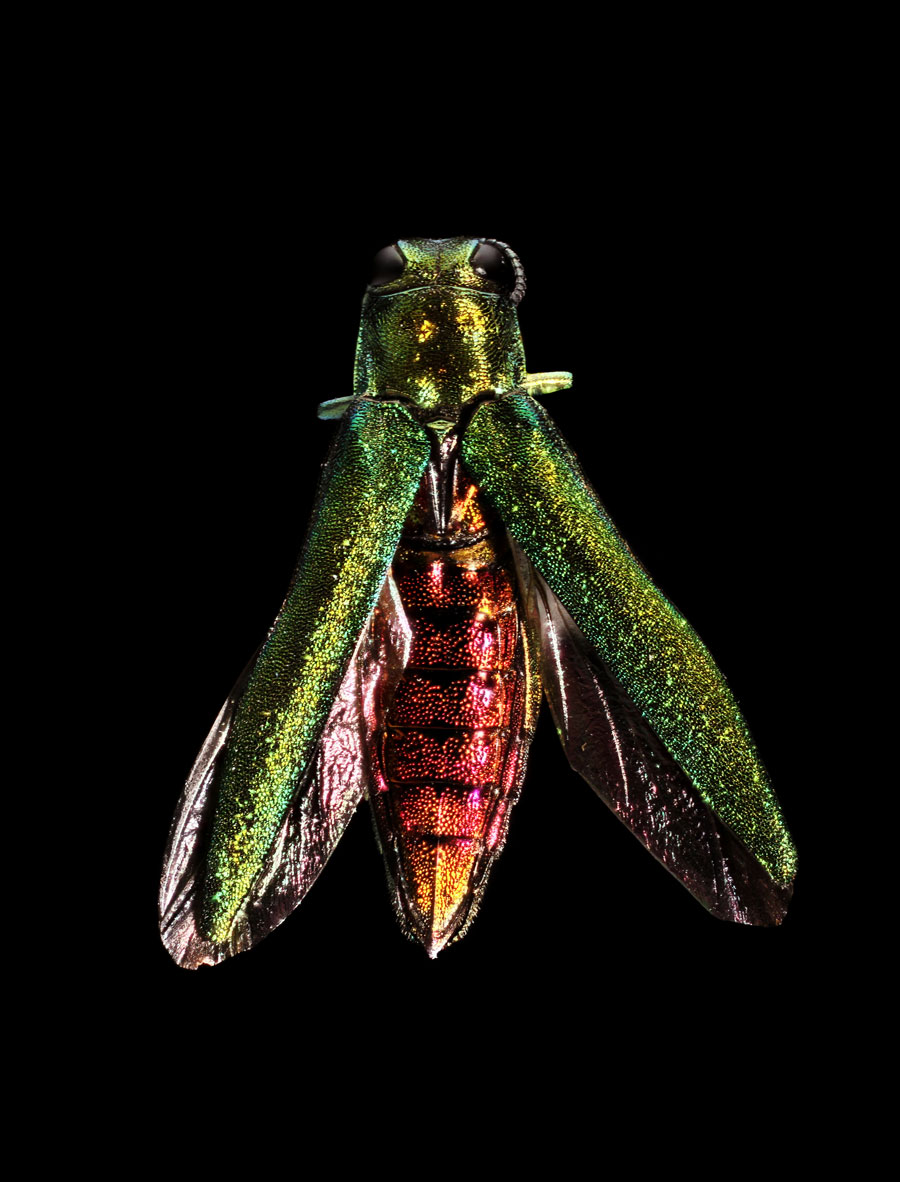 The Case of the Emerald Ash Borer and Urban Forests
Many non-native pests, like the emerald ash borer, are introduced through global trade; the pests hitchhike across borders on live plants and wood. Ash trees are a key part of Toronto’s urban forest, recently estimated by TD Bank to contribute $7-billion to the local economy. First detected in Canada in 2002, the emerald ash borer is expected to kill over 99 per cent of ash trees within six years. In Toronto alone, all 860,000 ash trees are expected to be killed by this insect. The cost of replacing all ash trees in Canadian municipalities is estimated at $2-billion. If we can’t control such a devastating pest in cities, how will we do so in natural forests?
Photo by Benjamin Smith \ via Fotolia

Forests in Canada that are currently commercially harvested are almost all reforested through planting or natural regeneration. As a result, the practice of forestry contributes little (except eight per cent lost to roads) to annual net deforestation, although inadequately reforested areas persist from past logging, natural disturbances and increasing losses in plantations to insects and disease.

Provincial policies should encourage the following practices to increase the resilience of Canadian forests:

Protect large areas of intact forest. This should include protection of areas with high topographic and ecological variability as well as unique habitat features. These will serve as carbon sinks and provide habitat for biodiversity. Plans for such reserve areas should consider connectivity among reserves to allow dispersal and migration of species as the climate changes. BC’s Great Bear Rainforest and Canadian Boreal Forest agreements are good examples of large-scale plans that include conservation areas.

Replace large-scale clear-cutting with diverse ”variable retention” harvesting methods. Maintaining varying proportions of living trees scattered or clumped within harvested areas better mimics natural disturbance, resulting in a diversity of stands and conditions across landscapes. To conserve biodiversity and maintain carbon storage, we must curtail the harvesting of old-growth forests.

Use genetically diverse seeds to pre-adapt regenerated forests to climate change populations. Not only do species differ in their climatic tolerances, but populations within a species differ genetically depending on the local climate to which they are adapted. For reforestation in uncertain future climates, we can collect seed from natural or selectively bred populations native to warmer or drier locations and mix those seeds with local varieties.

Diversity Is the Key to Resilient Forests
We currently have reforestation practices that meet the minimum policy requirements at the lowest possible cost. This has resulted in uniform forests that are more vulnerable to climatic change and pest outbreaks. We need provincial reforestation policies that encourage and reward practices that produce healthier and more diverse as well as productive forests.

Harvest levels need to be re-evaluated and set more conservatively than current levels, which are based on historical growth and yield of timber, as we cannot adequately foresee future growth rates and therefore sustainable harvest levels. We also need forest management licenses (tenures) and fees on public lands that recognize and compensate for the additional costs of better management practices to forest companies.

More fundamentally, the true value of forests needs to be reflected in fees companies pay to harvest wood on public lands (stumpage rates) and in the price of wood products in the marketplace.

We need to plant a diversity of species in urban as well as natural forests to reduce the trees lost when one species experiences a threat. To further bolster resilience, trees can also be planted in complex communities of mixed trees and plants.

Municipal programs and policies to diversify urban forests and to utilize the wood in dead trees will contribute to the sustainability of cities. Federal policies and inspection practices controlling the import of plant materials and wood also need to be tightened to prevent additional devastating pests from arriving.

Help tree species migrate to more favourable habitats as climates change. We can encourage migration by planting more tree species in increasingly favorable areas, and planting fewer species in areas where they are faring poorly.

Practice adaptive and long-term management. As climates change, we should experiment, monitor and continuously improve silvicultural practices. For example, the number of trees planted per hectare should be increased if mortality rises. To increase forest productivity, biodiversity and resilience, and to improve carbon, nutrient and water cycling, trees should reach older ages before harvest than current industry standards allow. Credible forest management certification programs, such as those of the Forest Stewardship Council, can promote good practices.

Encourage local management of forests. We should diversify and divest forest tenures and engage the public in forest policy and practice through mechanisms such as community forest licenses.

Recognize forests as an important and renewable resource. Provincial and federal agencies must strengthen their support for forest management, restoration of degraded and inadequately reforested areas, and forest research, monitoring and conservation.

Mitigate climate change. Canadian federal and provincial governments must develop rigorous new policies that substantively reduce greenhouse gas emissions. Only by slowing global warming will we give our forests time to adapt to new conditions.

Canada has the knowledge, expertise and resources to improve management of our forests. The public can demand better governance and stewardship of forests from politicians and governments. With leadership and vision, we can encourage the conservation and development of healthy forests such that they continue to house biodiversity, store carbon, cycle clean water and air, produce wood and deliver a wide range of additional ecosystem services.

Read the State of Canada’s Forests report and leave your comments below to weigh in on the topic.

Suzanne Simard is a professor in the Department of Forest and Conservation Sciences at University of British Columbia. Simard is also project leader for the NSERC CREATE TerreWEB program.

Sally Aitken is a professor in the Department of Forest and Conservation Sciences, and director of the Centre for Forest Conservation Genetics at University of British Columbia.