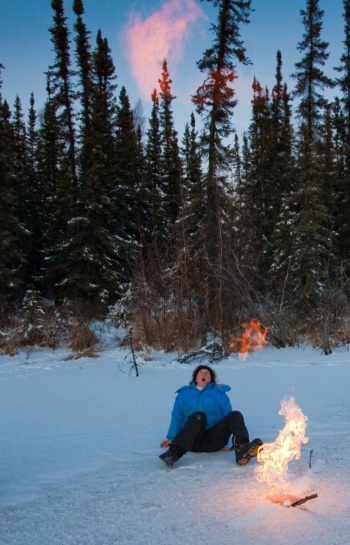 IN SEPTEMBER 2012, Arctic sea ice hit the lowest level ever recorded. While some will argue that this ominous benchmark cannot explicitly be tied to climate change’s acceleration, the unprecedented melting trend will certainly have dramatic ecological consequences for the whole planet.

“We are now in uncharted territory,” explained US National Snow and Ice Data Center director Mark Serreze when the news broke. “While we’ve long known that as the planet warms up, changes would be seen first and be most pronounced in the Arctic, few of us were prepared for how rapidly the changes would actually occur.

Speaking to The Guardian, author and environmentalist Bill McKibben criticized humanity’s lacklustre reaction. “Our response [so far] has not been alarm, or panic, or a sense of emergency. It has been: ‘Let’s go up there and drill for oil.’ There is no more perfect indictment of our failure to get to grips with the greatest problem we’ve ever faced.”

Equally unsettling is the fact that predictions made by 21 different scientific research groups underestimated this year’s melt-off by more than one million km2. And while the Arctic is obviously deeply troubled, more trouble is brewing. Its name? Antarctica.

Erratic and increasingly turbulent weather is perhaps the most visible impact of a melting Arctic so far. As sea ice continues to decline, the jet stream will likely keep slowing down and shifting further north, “bringing wild temperature swings and greater numbers of extreme events,” according to University of Washington oceanographer James Overland.

Others have corroborated this alarming theory. Research published in March 2012 by Jennifer Francis and Stephen Vavrus links Arctic climate change to recent natural disasters in the US and Europe. Their study says the jet stream is becoming “wavier” and slower, increasing the probability of prolonged extreme weather events in the mid-latitudes, including drought, flooding, cold spells and heat waves.

The prospect of a thawing Antarctic is uncertain. Records show that total sea ice surrounding the continent has increased at about one per cent per decade since 1979. However, recent studies indicate that Antarctica’s ice shelves are melting from underneath because the ocean is warming.

Beneath the West Antarctic ice sheet (one million km2) and the East Antarctic ice sheet (2.5 million km2) are pre-glacial sedimentary basins that contain 21 trillion tonnes of carbon. Scientists also say that another four billion tonnes of methane could potentially be released into the atmosphere if Antarctica’s ice sheets melt. Furthermore, there are substantial quantities of methane hydrate – an ice-like substance formed by high pressures and cold temperatures – at the bottom of the Antarctic Ocean.

The Arctic contains approximately 22 per cent of the planet’s untapped petroleum resources, plus mineral riches like diamond and nickel. And because 40 per cent of the Arctic Ocean’s ice cover has melted, the once-inconceivable prospect of industrial-scale commercial fishing is now possible.

In 2010 the krill fishery had to be partially closed for the first time ever, when a section of the Antarctic Ocean’s catch limit was reached. Krill are small (about two grams and six centimetres long) but influential creatures, with their 379 million tonnes of biomass serving as the main food source for most other species found in Antarctic waters. The dramatic krill decline is likely due to fluctuations in sea ice cover around Antarctica and the resulting loss of phytoplankton and algae. In turn, the drop in krill is probably impacting Adélie and Chinstrap penguins, whose populations have declined by more than 50 per cent in 30 years.

Only 3.41 million km2 of Arctic sea ice remained intact this summer. That’s 18 per cent less ice cover than in 2007 (the previous record-low year), and half the area that was frozen in the 1970s.

Although it’s been about 14 million years since the North Pole was ice-free, a 2007 assessment based on IPCC models predicted that the entire Arctic Ocean could be completely uncovered for a short portion of the summer by mid-century. Some scientists now say that collapse could happen within four years.

Although it dissipates much more quickly, methane is 25 times more powerful than carbon dioxide in terms of its global warming potential, making it like a sleeping giant’s temper. Off the coast of Eastern Siberia, scientists have spent two decades observing vast methane plumes that bubble up to the Arctic Ocean surface before entering the atmosphere. Many are tens of metres wide, but in 2012, researchers witnessed plumes that were more than a kilometre in diameter.

Other scientists have discovered that retreating glaciers and thawing permafrost in Alaska are releasing 50 to 70 per cent more methane than previously believed. 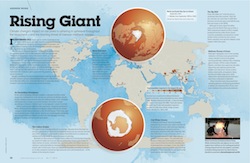 Buy the Lifecycles issue to see the accompanying map for this article – and the world’s top 20 cities threatened by sea-level rise due to climate change.

Watch the video above to see University of Alaska professor Katey Walter Anthony (who also appears on the cover of this issue) explain how methane in the melting permafrost is being released into the atmosphere, and listen to Andrew Wong interview her about why we should be concerned in this issue’s podcast!