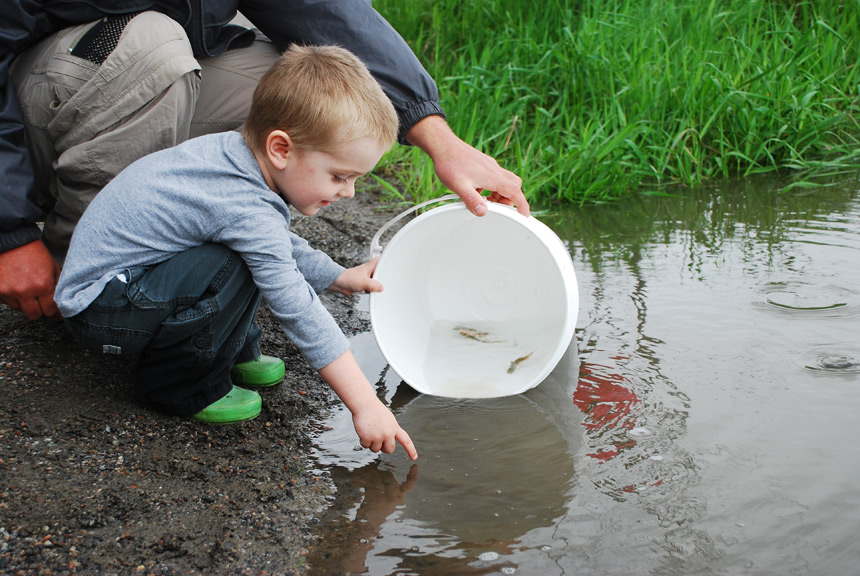 The forests of Sudbury at the end of August have yet to realize that autumn is approaching. Despite the growing chill, the leaves are still bright green, the grass and reeds are tall, and the lakes are blue and inviting. It’s the beginning of the busy season for the Junction Creek Stewardship (JCS) committee. As a charity organization, the bulk of its work relies on volunteers from the local community.  The beginning of fall means the return of educational programs for students of all ages about the watershed, the local wildlife and plants and basic elements of conservation. The most important lesson to be imparted, however, is responsibility. The organization aims to foster a sense of stewardship in the community by placing the power for environmental change in their hands.

The organization has come a long way from its humble beginnings. In 1999 Junction Creek Stewardship grew spontaneously out of discussions on the poor state of Sudbury’s water. The initial focus became reclaiming the central creek. Junction Creek runs through the heart of Sudbury. It’s a small, easily overlooked stream that branches along different avenues, disappearing underground only to reappear behind malls and between developments. Ranging anywhere from 2 to 30 metres wide, it’s easily hidden. Next to the creek itself, however, it’s the city that vanishes, hidden by trees and rises in the earth. Today, JCS’s work has expanded beyond the initial idea of cleaning the creek bed and restoring its water quality, to include surveys, plant management and educational programs.

Prior to restoration, the creek was generally seen as a cesspit. It would not have qualified as a creek, with more garbage than water and no living being occupying the ditches. Sarah Woods, one of the JCS’s coordinators, Dominique Gagnon, the biology intern, and I have driven to a section of the creek to see some of the work done by JCS in the past. We park on the side of a road, follow the gravel path below the street and are immediately next to the creek, on the Junction Creek Waterway Park trail. There are roughly 13 km of trail, with expansion in the works.

Woods points out the evidence of their previous volunteer efforts: dogwood, alder and ninebark shrubs are planted along the banks. Cedar and hemlock trees, still small but growing strong, rise above the long grasses

below. A second site shows off the erosion protection: root-wad structures made from cedar that line the bank. Root bulbs and large stretches of wood were placed into the bank amongst rocks and stacked firmly, to give the ground some relief from the persistent current. Four or five years ago, this area was so contaminated that nothing could live in this stretch of the creek. Today, Woods and Gagnon point out minnows, and deduce which of the frogs hiding under the rocks is responsible for the steady croaking.

A third site behind the Superstore causes both Woods and Gagnon to be immediately distracted by plants they can’t identify: tall, cubed stalks with bright yellow flowers that occupy the area that they haven’t seen since last spring. Bees, butterflies and birds flitter about on all of our travels, attracted by the flowers blooming alongside the creek. It’s idyllic and yet undeniably urban at the same time, graffiti-covered walls to the right and a sun-filled flower-lined bank to the left.

JCS has only two staff members: coordinators Sarah Woods and Shannon Dennie. They have a dedicated nine-member volunteer committee board. Despite its small size, the organization is not only well established, having operated for 15 years, but broad in scope. The group performs clean-up events, take students on educational workshops to the creek, and plant shrubs and trees. They raise awareness of issues directly impacting the creek such as dangers posed to endangered species like Painted and Blanding’s turtles. They re-sow seeds, remove invasive plant species, and manage erosion issues. Between the staff members, the board members, and a supportive local community, JCS also tackles the collection of scientific data ranging from collecting monthly water quality samples, to determining the population and distribution of turtles and trout. How is it possible to accomplish so much with so few?

“We have a lot of long-term commitment from our volunteers,” Sarah explains.  Bruce Doran is one such volunteer, who has been with JCS for six years. He was drawn to the organization’s dedication to outreach and education. “The most rewarding moment is when we get comments from the public saying that the water is getting better, the creek is getting better,” says Doran, adding, “To see that members of the community can do something, and have an impact.” Doran believes that the strength of JCS lies not only in its small size, allowing for quick consensus and action, but in its ability to make connections with other groups. JCS recruits volunteer groups from businesses, organizations like Scouts of Canada, and schools. “There are many different options and different things that we need help with. We have only two staff and they can’t do everything, so having several volunteers helping out with different things makes it very successful,” Doran says.

As an urban river, the creek is always in flux. Just as the city grows and changes around it, so too does the creek. It began as an important aspect of the old mining town of Sudbury, a method of transporting logs and a source of food and water. During the height of industrialization, it became a contaminated ditch. When the re-greening began, attention turned to Junction Creek – if the land could be fixed, why not the creek? Approximately 60,000 people live within a couple of kilometres of Junction Creek, but for a long time many were unaware and uncaring of that fact. It flows through Greater Sudbury from Garson to Lively and beyond, some 52 kilometres in length. Woods and Doran both note the increasing number of volunteers interested in their events. It’s not unsurprising; JCS actively tries to appeal to a variety of people. Junction Creek is part of the community, and JCS wants the community to be a part of its continued growth and prosperity. Woods mentioned that it’s getting harder each year to find a site to clean: even though there’s still pollution, there aren’t many places with enough space to occupy a large number of volunteers.

Efforts have gone toward restoring native plants to encourage biodiversity and fight the effects of invasive species such as the purple jewelweed that populates the banks in bunches of purple flowers and the wild cucumber vines that creep onto vulnerable young trees, smothering them. “A huge one is creating education and awareness about Junction Creek, about its existence in some cases, but certainly the life, that it’s very healthy. We have 16 species of fish in it and people don’t see that. They don’t see past the garbage. It’s actually quite a vibrant ecosystem, so education is about that, and then about creek related issues as well,” says Woods.

Some of their most successful programs have involved sustained engagement from the community. The Adopt-a-Creek program allows groups of volunteers to adopt a specific section of the creek and commit to cleaning it at least once every couple of years. The program has not only contributed to the creek’s increased cleanliness but also promotes community members to spend time at the creek and form new perceptions about it.

For the last three years, a lot of energy has been directed to the turtle project. Community members were asked to phone in with sightings of endangered Painted or Blanding’s turtles. With all the sightings collected, turtles were found and tagged as part of ongoing research about these species. The project has been deemed an incredible success, as the initial knowledge of three turtles became an awareness of a population of 24.

The hard work has not gone unnoticed. As winners of this year’s Group Hometown Hero award, presented by Earth Day Canada, JCS has been given $10,000 to fund its new initiative, Seeds of Biodiversity.  The project is going to span a year-and-a-half and is aimed at creating awareness and education about biodiversity and conservation amongst students. “It will be hundreds and hundreds of students that we’ll reach directly, that will give them a chance to sow seeds, to propagate seeds, to watch plants grow and … [to] increase the biodiversity in the watershed; so making that link and giving students a hands-on, tangible project. Not only do they get the experience, but they are actually really affecting change in the watershed,” says Woods. Part of the funding is necessary simply to gather the supplies – obtaining native plants and seeds for the northern ecosystem is not easy. Preliminary work will be done by volunteers, to collect as many seeds as possible. Collège Boréal has agreed to propagate the seeds for JCS, effectively creating a local seed bank from which future plants can be spread throughout Junction Creek to promote native plant biodiversity.

“Along Junction Creek a lot of trees have been planted, but there are still species lacking and we’d like to fill in those gaps. So it’s an extension of the restoration work we’ve been doing and it’s a logical and really important extension of what we’ve been doing. I think we’re well positioned to engage people in issues around biodiversity and food webs and ecosystems, and encouraging people to choose native versus non-native species. We’re also removing invasive species as part of this project,” says Woods.