Water is necessary for humans, but where does that water come from? The world’s rivers have been degraded by humans so drastically that the water security of approximately 5 billion people and the survival of thousands of aquatic species are at risk. Rivers are home to ~0.5% of our freshwater resources globally. This may sound insignificant, but this is where humans get most of our water for daily use. Around the world, rivers are key drinking water sources for many communities. Due to ongoing imperilment of our rivers, protecting freshwater sources has, in some places, been a case of life or death. Although this risk seems most tangible, there are many more reasons why we need to conserve rivers including their environmental, cultural, and economic value. This article will describe the different values of rivers and how they provide for humans in an insurmountable way.

Rivers come in many different shapes and sizes and present themselves as habitat for many species across the globe. Rivers are known to have some of the richest biodiversity in the world, and yes it goes beyond just fish. From snails, to alligators, to pollutant-sucking plants and piranhas; the habitat these rivers supply is of immense value to the world’s aquatic organisms. According to the Living Planet Index, freshwater vertebrate species have declined by 81% since 1970, which is a steeper decline than both terrestrial and marine species. Conserving freshwater species is important to ensure that our ecosystems are resilient to changes in the environment, as these ecosystems provide us with many other benefits related to culture and economics as well.

Additionally, rivers help us regulate our climate, which is becoming more important with increasing concerns of climate change. Rivers across the world help reduce the amount of carbon in the atmosphere by flushing carbon from land into the ocean. Scientists have estimated that the world’s rivers transport 200 million tons of carbon to the ocean every year. This equals about 0.02% percent of the total mass of carbon in the atmosphere. Over thousands of years, that number really adds up to significant amounts of carbon taken out of the atmosphere, which can no longer contribute to atmospheric warming and climate change. Rivers also play a significant role in several other environmental processes such as nutrient cycling and air quality regulation.

Rivers are vital to maintaining the function of ecosystems and the environment, yet their cultural importance is often overlooked. Since ancient times, rivers have influenced the way we live our everyday lives and our relationship to the environment, whether through farming, fishing, or powering homes. Fishing communities have always relied on the conservation of this resource to supply food and promote trade, especially among indigenous communities. Several agricultural communities benefit from rivers since farmers can use natural streams to develop and enhance irrigation systems to reliably water their crops. Despite the Nile River being the longest in the world, its cultural importance is like that of the Don River in Toronto. The Nile River was the means of life for settlements since 6000 BCE. The Nile holds religious significance since civilizations believed that the gods were responsible for annual flooding of the river, which deposited fertile soil along the riverbanks. Furthermore, the river was also a source of recreation among Egyptians, commonly used for water jousting and swimming.

In southern Toronto, like any other port, the city’s shoreline and the Don River have been built out extensively over the past century. Because of this development, and the sharp angles of the mouth of the Don River (which do not allow for the slowing of water like a winding river does), there is extensive flooding during rainy seasons. The federal, provincial, and municipal  governments have invested millions of dollars to re-naturalize the mouth of the Don River to reduce flooding within the city. The re-naturalization project has allowed for the revitalization of contaminated port lands in which oil and chemical industries historically dominated. Moreover, this will also allow city dwellers to escape the “city aesthetic” and immerse themselves in nature, hopefully improving mental and physical health. The Don River and Nile River are two of thousands that have the power to cultivate life and stimulate economic growth.

Rivers are of great economic importance, with many coastal communities globally depending on rivers to support their livelihoods. The most apparent economic value of our rivers is the drinking water source it supplies; it is estimated that 2 billion people receive their drinking water supply from dammed rivers. Indirectly, our existence fully depends on a river’s water supply as the driver of agricultural irrigation and hydropower. Less apparent is the dependence of the transport, tourism, and fishing industry on rivers. Historically, societies have always been found near water, due to the ease of transportation from ports. Rivers and their canals were vital to the transport of goods and people globally, and today there are more than 17,700 km of commercially significant navigation channels in the United States alone. Additionally, river tourism is a major economic resource supplying transportation, spectacular views, as well as supplying a sense of heritage and adventure. Rivers, particularly those that are left in their natural state, support some of the largest freshwater fish harvests in the world. A good example would be the Mekong River in East Asia which has an annual harvest of 4.4 million tonnes, valued at $17 billion USD per year. Unfortunately, migratory freshwater fish populations have declined by 76% since 1970, with the biggest driver being habitat degradation. Continual degradation of rivers due to human activities will undoubtedly jeopardize the vital source of food and livelihood that water supports, especially for vulnerable, rural communities and third world countries.

With increasing threats such as habitat degradation, climate change, and much more our rivers are at greater risk than ever before. River restoration projects are receiving more attention as a result, yet more can be done. In conclusion, there are many distinct reasons that make it necessary to maintain the health of our rivers across the world. From preserving the environment, to conserving our own culture and economies, humans have a high stake in the wellbeing of our rivers and their ecosystems. Individually, being a steward for rivers will help them continue to thrive for future generations. 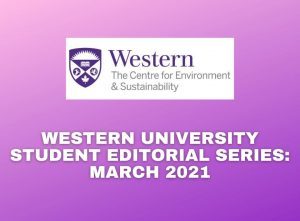 W2RhdGEtdG9vbHNldC1ibG9ja3MtaW1hZ2U9ImFjZGQ4ODc1NDU3NjM5YTllMTlmNWVjYWFlYmM3MmQ0Il0geyBtYXgtd2lkdGg6IDEwMCU7IH0gIFtkYXRhLXRvb2xzZXQtYmxvY2tzLWltYWdlPSIzMmYxMDc2ODUyZWZmZWU1ZGZjMzQ1N2VmZWM1MjEzYiJdIHsgbWF4LXdpZHRoOiAxMDAlOyB9ICBAbWVkaWEgb25seSBzY3JlZW4gYW5kIChtYXgtd2lkdGg6IDc4MXB4KSB7ICAgIH0gQG1lZGlhIG9ubHkgc2NyZWVuIGFuZCAobWF4LXdpZHRoOiA1OTlweCkgeyAgICB9IA==
Meghan Sauro
W2RhdGEtdG9vbHNldC1ibG9ja3MtaW1hZ2U9ImFjZGQ4ODc1NDU3NjM5YTllMTlmNWVjYWFlYmM3MmQ0Il0geyBtYXgtd2lkdGg6IDEwMCU7IH0gIFtkYXRhLXRvb2xzZXQtYmxvY2tzLWltYWdlPSIzMmYxMDc2ODUyZWZmZWU1ZGZjMzQ1N2VmZWM1MjEzYiJdIHsgbWF4LXdpZHRoOiAxMDAlOyB9ICBAbWVkaWEgb25seSBzY3JlZW4gYW5kIChtYXgtd2lkdGg6IDc4MXB4KSB7ICAgIH0gQG1lZGlhIG9ubHkgc2NyZWVuIGFuZCAobWF4LXdpZHRoOiA1OTlweCkgeyAgICB9IA==
Meghan graduated with a Bachelor of Science from Western University with an Honors Specialization in Environmental Science where her undergraduate thesis looked at the relationship between nutrient concentrations and OM decomposition in streams. She has now moved on to a Master’s in fluvial geomorphology in the department of Geography and the Environment here at Western. Outside of academia, she enjoys spending her time hiking and camping, and spends her summers swimming and hanging out by Georgian Bay.
Ellen Marejka
W2RhdGEtdG9vbHNldC1ibG9ja3MtaW1hZ2U9ImFjZGQ4ODc1NDU3NjM5YTllMTlmNWVjYWFlYmM3MmQ0Il0geyBtYXgtd2lkdGg6IDEwMCU7IH0gIFtkYXRhLXRvb2xzZXQtYmxvY2tzLWltYWdlPSIzMmYxMDc2ODUyZWZmZWU1ZGZjMzQ1N2VmZWM1MjEzYiJdIHsgbWF4LXdpZHRoOiAxMDAlOyB9ICBAbWVkaWEgb25seSBzY3JlZW4gYW5kIChtYXgtd2lkdGg6IDc4MXB4KSB7ICAgIH0gQG1lZGlhIG9ubHkgc2NyZWVuIGFuZCAobWF4LXdpZHRoOiA1OTlweCkgeyAgICB9IA==

Ellen graduated from the University of Guelph with her Bachelor of Environmental Engineering with Honours in 2019. She has previously worked in consulting, specializing in air quality monitoring for contaminated sites. Ellen is currently working towards her Master’s degree at Western University which is focuses on the applications of wind engineering for low rise building construction. Her role specifically relates to the design of standing seam metal roofs.

Shayla completed her undergraduate degree at Western University completing a Bachelor of Science with an Honours Specialization in Environmental Science and a Major in Biology. She is now beginning her Master’s in Biology with Collaborative Specialization in Environment and Sustainability in Nusha Keyghobadi’s lab working on a collaborative project to reintroduce an endangered species of butterfly in Ontario, the Mottled Duskywing (Erynnis martialis), to suitable habitats where it once existed. Shayla’s role in this project is to characterize the genetic diversity of extant populations in order to inform source population selection for reintroduction initiatives.