In 2005, the Ontario government created the Greenbelt Plan to protect farmland and green space from development pressure. Then in 2006, the Ontario government created the Growth Plan for the Greater Golden Horseshoe (GGH), which predicts population growth and directs it to urban areas, restricting development on farmland and forests.

In 2005, the Ontario government created the Greenbelt Plan to protect farmland and green space from development pressure. Then in 2006, the Ontario government created the Growth Plan for the Greater Golden Horseshoe (GGH), which predicts population growth and directs it to urban areas, restricting development on farmland and forests.

The GGH expands from Niagara Falls to Georgian Bay to Peterborough, enveloping major cities and towns around the west and south of Lake Ontario. With a population of over nine million, the GGH is expected to grow by another 4.5 million over the next 25 years.

The Ontario Greenbelt is the largest greenbelt in the world, protecting 1.8 million acres. The Growth Plan also sets out intensification and density targets for the region, in efforts to have cities build up, not out.

The intensification targets of the Growth Plan  mandate only 40 percent of new residential growth to already urbanized areas where there are existing urban services, roads, water, sewers, schools and existing or planned regional transit. Meanwhile, 60 percent of new growth will continue to be on greenfield (mostly farmland) sites. The concern among farmers is that these low intensification numbers will only lead to more sprawl.

We need to temporarily ‘greenbelt’ all of Southern Ontario until the appropriate studies can be done to identify significant features.” – Ted Shelegy , Brant County farmer and Greenbelt activist

Brant County sits on the western edge of the GGH, just outside the Greenbelt’s protection. The City of Brantford, located smack in the middle of the County, is trying to sprawl into rural Brant County by annexing farmland from the county through boundary negotiations between the city and county administrations. Originally the city wanted over 11,000 acres of mostly farmland from Brant County. The county countered with an offer of 3,500 acres of mostly farmland. Most of this land is in the protected agriculture ribbon that encircles Brantford. This ribbon was one of the first greenbelts in Ontario, created in 1980 by provincial law.

Brantford has the option to build up, rather than out, paving over precious farmland. According to the Ontario Federation of Agriculture, we are losing 350 acres a day of prime farmland in Ontario. That’s like 264 football fields disappearing every day at the hands of developers.

Now, in 2015, the Ontario government is conducting a 10-year review of the successes and challenges of its anti-sprawl policies. The review panel is applying a new lens – that of planning for climate change.

Brant County farmer and activist Ted Shelegy, a member of the local board of directors for the National Farmers Union – Ontario (NFU-O), is well aware of the concerns of his fellow farmers. Developers and a landbanking company have “leapfrogged” over the boundary of the Greenbelt and are gobbling up farmland in Brant County with the intent of paving it over. Shelegy knows that local farmers can’t compete with developers and landbankers to buy farmland. As century-old family farms are sold off for potential development, the rural fabric of the farming community is lost, one neighbour at a time.

Shelegy was among many farmers, concerned citizens, developers, landbankers and naturalists  who attended one of the 17 town hall meetings that were hosted by the Ministry of Municipal Affairs and Housing this past spring. The ministry was seeking feedback on the Ontario Greenbelt and the Growth Plans, policies that were originally intended to curb sprawl in Southern Ontario.

The Grand is a heritage river and has the largest watershed in Southwestern Ontario. It empties into Lake Erie, the most threatened of the five Great Lakes. The watershed has three moraines (in Galt-Paris, Orangeville and Waterloo), which need protection as source water areas.

The Grand River watershed, home to the fragile Carolinian forest zone, is a rich agricultural land area. However, it is threatened by highway expansion, aggregate removal, agricultural chemical contamination, and runoff and water exploitation and degradation.

Councillor Dave Neumann, the former Liberal MPP for the Brant/Brantford area and former Mayor of Brantford, played an instrumental role in creating a “permanent agriculture” ribbon around Brantford. Now Neumann is pitching the concept of a Grand River watershed greenbelt. 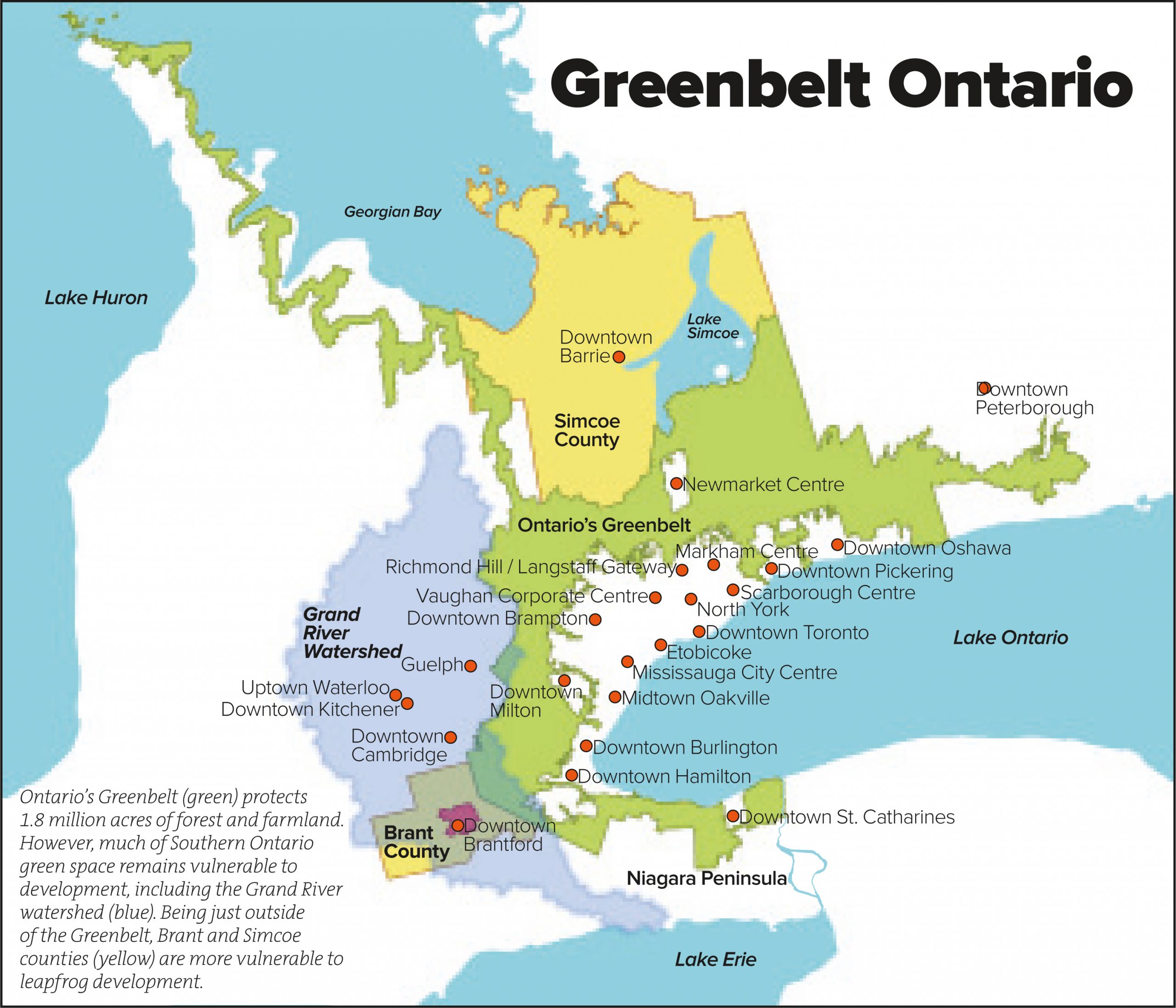 The Greenbelt plays a crucial role in addressing climate change, protecting natural ecosystems and fostering biodiversity. The Greenbelt is also a massive carbon sink, and in reducing sprawl, it reduces CO2 emissions. Just think of how much the economy would benefit if we protected all of the farmland and green spaces in Southern Ontario.

Unfortunately, a significant amount of farmland and green space in the GGH is unprotected and vulnerable to development projects like highways and hydro corridors, which might fragment existing natural and agricultural systems. This has allowed extensive land speculation for sprawling development – the very activity that these plans were intended to prevent.

Sustainable Brant, a not-for-profit organization dedicated to protecting farmland and the environment in Brant County, presented the Greenbelt review panel with 1,500 signatures requesting that the Greenbelt be extended to protect farmland in Brant County. Some of those signing the petition are farmers, but the majority are consumers who are concerned that there will be enough local farmland left to provide local food to the expanding urban population.

1. We must address climate change and reduce our carbon footprint. To do this, we must build compact communities with easy access to public transit, build a variety of affordable housing forms, and protect our precious farmland and green spaces.

2. Future land-use planning in Southern Ontario requires a paradigm shift from population growth forecasts. There are serious ecological limits to endless growth. As long as the GGH remains hooked on growth, we put our water resources, natural heritage and food sovereignty at risk. The planet can no longer support low density sprawl.

3. Expand the Greenbelt to protect farmland and green spaces throughout Southern Ontario where the greatest sprawl pressure is. Southern Ontario is one of the best areas to grow food in Canada, with its longer growing season, good soil, and nearby markets. We must ensure that we grow enough local food to feed the growing population in this region.

4. The Ontario government should follow Saskatchewan’s example and place a moratorium on investment in farmland by pension funds and foreign investors that have no connection with the land. Farmland ownership should be in the hands of local owners who agree to protect it as farmland.

5. At the very least, the government should greenbelt the Grand River watershed. Part of the watershed is already protected in Wellington, Hamilton, and Halton. This would ensure protection of valuable farmland and water resources by protecting the headwaters and tributaries of the Grand River.

After 10 years, the main lesson learned about Ontario’s Greenbelt is that we need more. More protected land, more support for farmers and more commitment from the provincial government.

The greenbelt review panel will be requesting more feedback in the fall when they release their policy recommendations. Check out the policy review from the Greenbelt Alliance (a group of 112 member organizations).

Various municipalities have food charters based on studies that determine the amount of farmland needed to remain agriculturally zoned and ensure sufficient local locally grown food. Great examples are Waterloo and Hamilton.

There is growing support from municipal councillors, individuals and a coalition of environmental organizations for a Grand River Watershed Greenbelt.

Ella Haley is a farmer, activist and assistant professor of Sociology at Athabasca University.