Emi Do was captivated from the get go. By the beginning of the 2011 season, she had accumulated 13 plots of land scattered around Vancouver, to which she tended by way of bicycle and trailer. Her first season, at the beginning of 2010, Do stumbled on the opportunity to farm a plot on the Agriculture Land Reserve in Southlands, Vancouver.

Emi Do was captivated from the get go. By the beginning of the 2011 season, she had accumulated 13 plots of land scattered around Vancouver, to which she tended by way of bicycle and trailer. Her first season, at the beginning of 2010, Do stumbled on the opportunity to farm a plot on the Agriculture Land Reserve in Southlands, Vancouver.

When Do started, some in Vancouver folk would say, “I have this garden I’m not using, why don’t you come farm it? Just do whatever you want and you don’t have to pay anything, it’s fine.” Not focusing on the logistics of the offers at that time, Do accepted – “I was just thinking that’s great, free land.”

Do’s adventure growing food in Vancouver led her to co-found the Vancouver Urban Farm Society, grapple with city by-laws, and start Yummi Yards – a backyard farming business producing vegetables for weekly food boxes and farmers’ markets. She has since embarked upon a masters degree in agricultural economics at the Tokyo University of Agriculture.

Do is the archetypical agrarian of this time and space. She’s young (in her 30s), physically active, university educated and believes there are fundamental flaws in  mainstream industrial food system – the structure that provides the majority of the food we eat.

The distinction between a gardener and an urban farmer is a matter of scale. While the gardener may tend tomatoes on their roof or have a plot in the community garden, the farmer works on a commercial scale – whether aiming to profit financially or enterprising in social change.

Though not a new idea, the current iteration of urban farming has become increasingly noticed as local and organic food movements grow. Vancouver’s urban farmers are tending to plots scattered throughout the city, striving to legitimize the practice. Farmers see urban agriculture as a way to reconnect city dwellers with a food system from which Canadians have become disassociated.

There are different models of urban farms in Vancouver, from operations like Emi’s (farming front and backyards), to growing micro-greens in repurposed shipping containers and socially oriented projects on public land.

The social benefits of urban agriculture are low-hanging fruit. The heavy resource requirements of food transportation can be significantly reduced if food is grown closer to our tables. Cities have pockets of underutilized land, which farming can make productive use of.  Additionally, there is an increasing drive to know where our food is coming from, and if the farmer is our neighbour, this information is implicit. Food security is a growing concern for many Canadians.

All this makes the notion of urban farming sound like a pretty good idea. If only it were as straightforward as planting some seeds and reaping what you’ve sown. Vancouver’s urban farming vanguard must deal with the hard work of any agriculture operation as well as the additional bureaucratic and logistical hurdles of changing the status quo and operating with the restrictions of an urban area.

An example was Do’s Jerusalem artichokes. In August of 2013, Do received a complaint about the height of her artichokes, which were growing on a boulevard plot at 41st and Blenheim – a plot which she had been farming for three years. When the issue was brought to the attention of Do and the city, it posed a dilemma: the private farming of public land.

While in principle the City of Vancouver supports urban farming, as it is in line with the goal of becoming the world’s greenest city, the immediate reality of implementing city farming is more challenging. In the case of the Jerusalem artichokes, how does the city ensure that the public land continues to benefit the surrounding community while allowing a private business to operate there? In the short term, the solution is a workaround, as Vancouver doesn’t have a clear course for this unprecedented circumstance.

The city was already aware of Do. They had granted business licences – one for brokering sales from a home office and another for an edible landscape business. The catch was the latter licence stipulates she cannot produce food on residential property. In the end, Do was able to keep her artichokes, but had to reduce their height to be in compliance with the one metre height restriction on growing plants in the boulevard.

The private use of public space is but one of the many issues that require sorting out in order for urban agriculture to continue propagating in the city.

Despite the trials and tribulations, Vancouver seems to share the vision of the young urban agrarians. The City of Vancouver’s 2020 Greenest City Action Plan is a policy initiative that sets out to “increase city-wide and neighbourhood food assets by a minimum of 50 percent over 2010 levels.” In this case, food assets include community kitchens, farmers’ markets, community produce stands, community compost facilities, community garden plots and urban orchards. There has been some headway on this initiative. In 2010, Vancouver calculated 3340 food assets. In October of 2015, that number was up to 4,556, a 36 percent increase.

As of the end of 2015, 18 urban farming businesses were operating 50 sites totalling three hectares in the City of Vancouver. Most of these are in single-family back and front yards, but a few are at schools, and some on underutilized or empty lots. 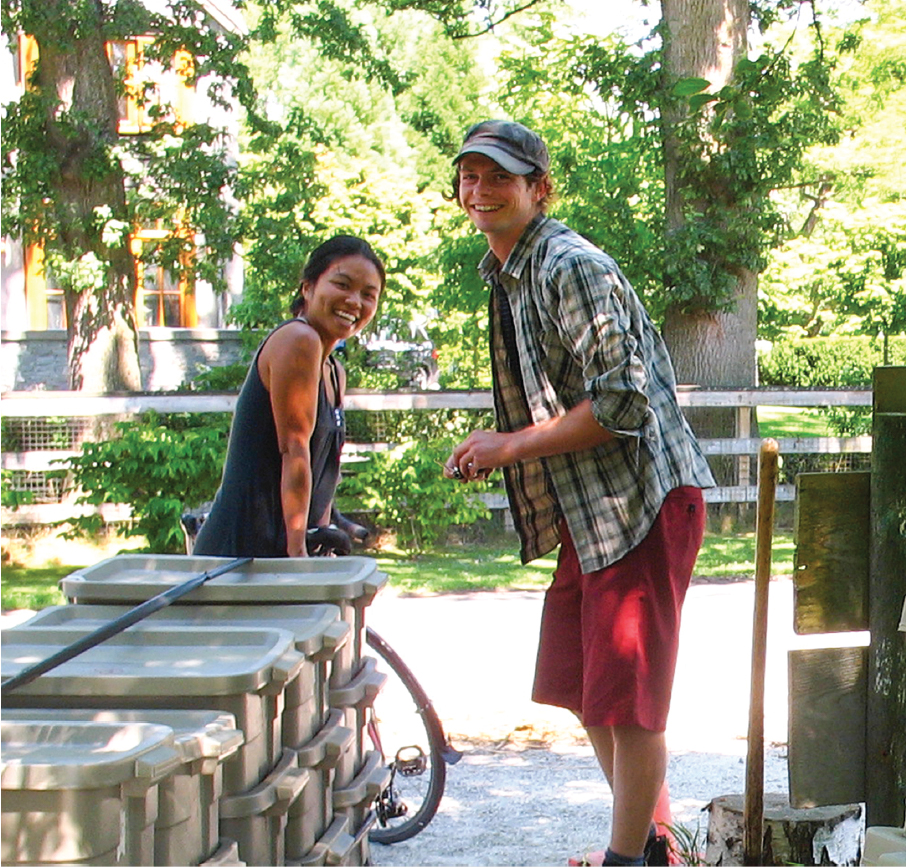 Emi Do delivers boxes full of freshly picked, farm-raised food on her bike to their Community Supported Agriculture (CSA) members. CSAs are an alternative model of purchasing local farm products. Members pay at the beginning of the growing season for a share, and in return, receive a weekly harvest box, typically equalling a set value per week. Photo by Eirlys Rhiannon.

“The very first action we did with Greenest City is put that garden in because people could see it every day and be like ‘OK, this matters to the city, they want this to happen,’” said Councillor Andrea Reimer, referring to the community garden in front of City Hall. Reimer advocates for farming in the city and was on the team that spearheaded the 2020 Greenest City Action Plan.

Reimer says the city’s food policy strategy is good; the trouble is in making the actual policy outcome happen. “Cities are technical by nature. It’s zoning and development by-law, it’s street by-law, it’s building code,” said Reimer, adding that the city is in the pilot stage for a lot of different types of farming operations – trying to figure out how urban farming will progress. As a result, the city of Vancouver is open to new proposals and early adopters with innovative ideas about growing food.

“In order for us to learn every possible situation, you need to have people come forward with proposals, and that’s currently what the city is in the business of doing. The city is open to the early adopters coming forward with new ideas about how food is meant to be grown.”

Across the harbour in North Vancouver, there is a farm doing something a little different. In Loutet Provincial Park, next to some sports fields along a trail popular for walking dogs and riding bikes, farmers and volunteers grow a variety of produce. More than food, they are growing awareness of and access to farm-fresh food in North Vancouver. Loutet Farm is the first project of its kind in this part of the world – a social-purpose farm on parkland.

Farmer Gavin Wright found his way to the project at the beginning of 2012. “My role was to sort of turn it into an actual farm business that was ultimately breaking even in terms of revenue generation,” a goal which has been attained.

Wright loves growing food. He also loves the community aspect of Loutet Farm, something he realized was missing from his working life while farming in Pemberton.

“I’d be out there farming on the Pemberton Meadows Road and I’d be weeding carrots all day long and there might be three or four cars that drove by,” he said.

“This position here, for me, was really exciting because it’s actually farming, actually managing a farm, making those decisions, learning from your mistakes.” Wright underscores the importance of engaging with the surrounding community – volunteers, customers and passersby and the opportunity for people to engage with their food sources.

“I think we need to facilitate that as much as possible because for most people, you go to the grocery store and lettuce comes wrapped in a plastic bag and steak comes on a little meat tampon and you don’t think about where that food comes from,” he added.

The Loutet Farm was conceived at UBC’s School of Architecture and Landscape Architecture’s Greenskin’s Lab and transplanted to the Loutet Farm: Edible Garden Project. In the fall of 2011, the project started – after discussion with North Vancouver, consultation with the neighbourhood, developing a plan, attracting sponsors and volunteers, fundraising, and partnering with the North Shore Neighbourhood House.

It has since expanded from the original site to include two nearby locations – Southerland Schoolyard Market Garden and Maplewood farms. In the fall of 2012, a teacher from Southerland Secondary approached Loutet and asked how the school and the farm could be involved. After the requisite consultation and fundraising, the Southerland Schoolyard Market Garden started in 2015. Students grow and learn about food in the outdoor classroom comprised of six raised beds. The Edible Garden Project provides an education coordinator who oversees the space and works with teachers to help incorporate the garden activities into their lesson plans.

Community orientation is prevalent among Vancouver’s urban farmers. People who enter this type of venture want to be involved with food and they also tend to desire a real engagement with their fellow farmers and consumers.

In November of 2010, a group of farmers, including Emi Do, founded the Vancouver Urban Farm Society. The nonprofit organization is dedicated to increasing the sustainability of urban farming in Vancouver and throughout BC. There are now 23 members in the greater Vancouver area.

“The inception of [the Society] as an organization was inspired by a group of urban farmers that didn’t want to be working in silos – you know the spirit of collaboration,” said the organization’s executive director, Marcela Crowe.

From its inception, the group’s focus was to understand and advocate for what Vancouver’s urban farmers need to be successful. One of the primary objectives was to create real business licences so that farmers could operate legitimately.

Despite the common element of growing food in the city, the membership is a textured group of people. Some have been farming in Vancouver for a decade, while others are just emerging into the realm. Some farmers grow greens for market in a shipping container and others, like Sole Foods, operate as a not-for-profit with a mandate of helping people who face barriers to employment.

Vancouver’s farmers want to improve urban dwellers’ relationship with food. They want to create enterprises that reach further than the business of creating and selling goods. They want to generate social wellbeing.

While the heavy social emphasis may be a new facet to this iteration of urban farming, growing food in cities in this part of the world isn’t new. Asians have been growing vegetables in this area for many decades, and the Coast Salish peoples for millennia before them.

Zsu-zi Fodor, an adjunct professor at UBC School of Community and Regional Planning and a Co-Chair of Vancouver Food Policy Council, says urban farming is wrapped in a lot of city policy processes that need to be undone to enable farmers.

Fodor muses, “It’s funny, you wouldn’t think it would be so difficult to do something that we’ve done for thousands of years.”

Drew Copeland is a Vancouver-based journalist.