IF CANADA’S population were spread evenly across our country, each Canadian would enjoy almost two football fields of farmland. This number is second only to Australia, and is five times more than France, 13 times more than Haiti and 26 times more than Costa Rica. An abundance of farmland means we can produce much more food than we need, allowing a robust export market for agricultural products.

IF CANADA’S population were spread evenly across our country, each Canadian would enjoy almost two football fields of farmland. This number is second only to Australia, and is five times more than France, 13 times more than Haiti and 26 times more than Costa Rica. An abundance of farmland means we can produce much more food than we need, allowing a robust export market for agricultural products. As our “basic industry” (a quote often used by former CBC Toronto farm host George Atkins), Canada’s agriculture and food sector is responsible for eight per cent of national GDP and employs about 12 per cent of Canadians. Exports are responsible for over half of our agricultural economy.

The problem with being an export powerhouse, however, is the tendency to focus on food production and ignore any negative side effects. For example, deregulation and other changes put in place to encourage higher agricultural production have resulted in massive consolidation within the grain and livestock sectors, reducing economic opportunities for many rural Canadians. The shift to industrial agriculture has also contributed to dramatic declines in biodiversity; persistent water quality problems, such as algal blooms in Lakes Erie and Winnipeg; declining effectiveness of agrochemical biocides; and increases in crop and animal diseases.

The problem with being an export powerhouse is the tendency to focus on food production and ignore any negative side effects.

Ironically, our focus on agricultural production also threatens the economic viability of our agriculture sector. While the economic value of food production increases each year, the proportion of that income that stays with farmers has plummeted. This declining portion is directly responsible for increasing farm size and farm consolidation. In 2014, grain farmers required about twice as much land to make the same income as in 1990. This is a disturbing trend since history teaches us that highly specialized, industrial-scale farming can lead to dramatic economic collapse.

The industrial-scale “bonanza farms” of 100 years ago were killed by overspecialization and loss of ecological integrity through soil exhaustion and disease. Moreover, their top-down business structure meant they had no real roots or stake in the local community. The smaller family farms that replaced the bonanzas were better able to withstand fluctuating commodity prices due to more diversified operations that almost always included both crops and livestock. Even today, diversified, mixed farms are more financially stable and produce more ecological goods and services than most specialized operations. 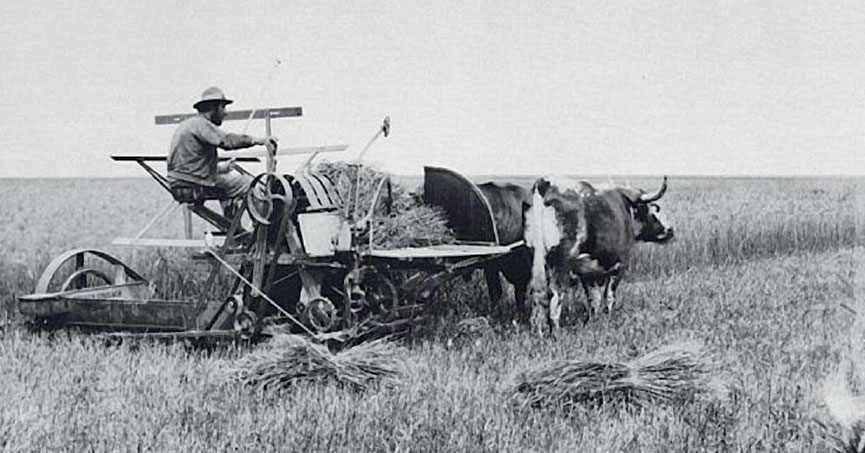 Failing Megafarms: A Canadian Tradition
One hundred years ago, the Red River Valley of Manitoba and North Dakota was home to mega-farms, massive even by today’s standards. These 16,000-hectare-plus “bonanza farms” were owned by shareholders who hired managers to run them. Specialized operations that grew wheat for export to distant markets, these farms operated as models of economic efficiency for 30 years. When conditions – soil exhaustion and price fluctuation – conspired against this large-scale model of agriculture, the farms vanished almost overnight and were replaced by more resilient family farms.

RELATED: How the family farm fits into the story of rising food prices and global food insecurity

However, in the hopes of greater economic efficiency (that is, a return on financial investment), industrial thinking has once again pervaded Canadian agricultural policy. Economic instability still plagues industrial farming, but this time myriad government programs bail farmers (or urban investors) out of trouble, while soil exhaustion, loss of biodiversity, water quality problems and other environmental issues worsen. This evidence points to the need for a systemic change to Canadian agriculture.

Our search for change must begin here and now. We now know that diversified, family-owned farms are among the most productive and resilient farm business units in the country. Many of these farms have a history of developing and embracing ecological practices such as no-till farming (also called conservation agriculture), crop-livestock integration, organic farming and grass-fed animal production. Evidence from around the world has concluded that such ecologically integrated agriculture will be essential for meeting the dual goals of feeding the world’s growing population and improving environmental quality to preserve a livable planet.

For example, agroecological techniques have resulted in food security and improved household livelihood in African communities that previously relied on food aid. Some Canadian farmers are adapting these African systems to large-scale agriculture in an effort to make our soil-conserving, no-till farming systems less reliant on herbicides for weed control. Such a reduction in reliance on agrochemicals has been linked to maintenance of biodiversity in and around farmlands.

We now know that diversified, family-owned farms are among the most productive and resilient farm business units in the country.

Climate change and high energy costs are new realities further driving our need for ecological farming. Some climate change-related weather anomalies, like droughts and floods, can be buffered by including more resilient and well-adapted perennial crops such as emerging perennial wheat types in agricultural systems. Shifting animal production to less grain feeding and more grass feeding is a business model that embraces greater use of perennials and also results in a higher conversion of fossil fuel energy to food energy.

Federal policy needs to take more seriously the dual goals of productivity and sustainability. Through the Canadian Alternative Land Use Services program, for example, farmers are given financial compensation for producing ecological goods and services such as water filtration and carbon sequestration on their farms. In addition to supporting traditional farm families, we must also provide opportunities for interested “landless” citizens – young people and new immigrants, for example – to enter agriculture. Agricultural land, whether in rural, urban or peri-urban settings, can be made available through land trusts and other innovative arrangements.

Canada can continue to be a world leader in agriculture – and a leading exporter of food. But we must turn our attention to ecologically integrated systems that work with nature rather than “subdue or ignore nature.”

What do we want our two football fields per Canadian to look like? If we choose a diverse, integrated agricultural system, we will have food production that is more resilient and self-sustaining and, unlike the short-lived “bonanza” dinosaurs of the past, will allow us to adapt to the economic, social and environmental circumstances of our changing world.

Join the dialogue: add your perspective on what Canada’s food & agriculture industry needs in the comments below.

Martin Entz is a professor in the Department of Plant Science at the University of Manitoba, researching organic production systems and beneficiary traditional and novel rotational systems.