Imagination is key to innovation. After 18 years of constructing and racing solar-powered cars the Queen’s Solar Design Team, situated at Queen’s University in Kingston Ontario, plunged head first into building sustainable and energy efficient homes. They ended up placing first at the US Department of Energy’s Solar Decathlon in 2013 alongside Carleton University and Algonquin College for their net-zero home, and are now taking on a new challenge.

Imagination is key to innovation. After 18 years of constructing and racing solar-powered cars the Queen’s Solar Design Team, situated at Queen’s University in Kingston Ontario, plunged head first into building sustainable and energy efficient homes. They ended up placing first at the US Department of Energy’s Solar Decathlon in 2013 alongside Carleton University and Algonquin College for their net-zero home, and are now taking on a new challenge. Their goal? Building a completely autonomous home capable of surviving the Canadian winter.

The Queen’s Solar Education Centre as it is called is located at Queen’s University and will be used as a centre for inspiration, innovation and education.

Unlike a net zero home, which gives as much electrical energy to the grid as it draws from it, an autonomous home is completely independent of outside power sources and municipal water systems. It eats what it makes.

“For example,” says Matt Bowen, the Electrical Manager, “we feature Motech 235W photovoltaic panels, to generate electricity from sunlight. We use 8 large capacity Surette Rolls batteries to store the electricity generated by the solar panels, for use at night or during days of low sunlight.”

“I’d say, right now, the most impressive part of the home is the Solar Photovoltaic (PV) system simply because it’s the only system that’s nearing a working state” Bowen also mentions. “I’m very excited to see where our heating system ends up though, I believe it will be a very impressive system of technologies.”

The home will also feature “an integrated HVAC and hot water system heated with solar thermal technology, as well as rainwater collection, storage and filtration systems making use of grey-water runoff and compost to nourish the home’s flora,” as was stated on The Engineering Society of Queen’s University website.

The team has three main objectives with the house. The first is to give students the hands on opportunity of working with sustainable and energy efficient homes. “The hope is that they’ll sort of be inspired by this work, and decide to work in environmental fields and the solar industry,” says Katie Yang, the Buisness Manager on the team. 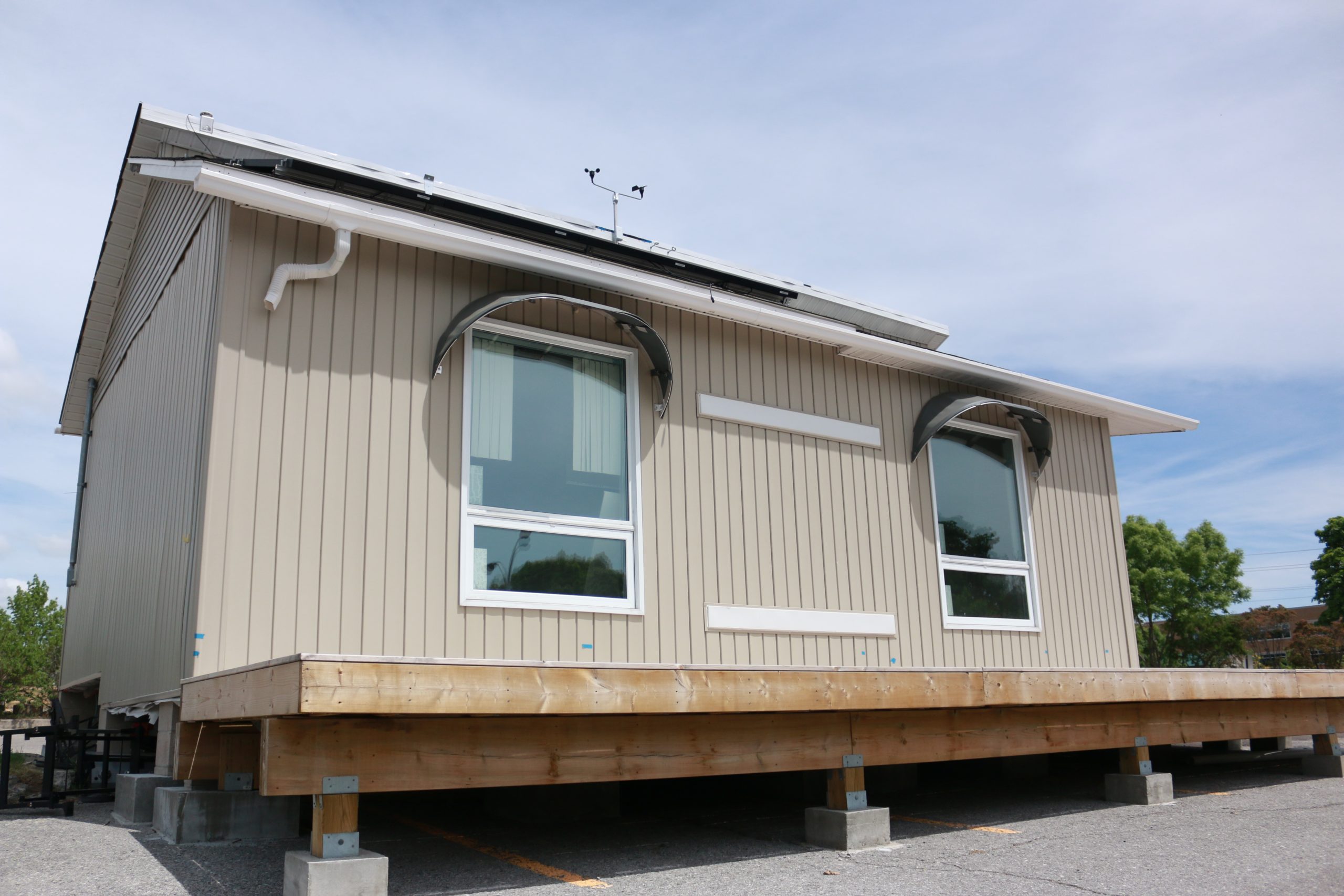 Close up of the exterior of the solar house

The second is to make the home a center for innovative research. Not only will it be a space to implement existing technologies, but also it will test out new ideas for similar houses. The team hopes that by doing so, they will discover a way to make living off grid easier by either making it less expensive or more efficient.

Their third and final objective with the house is broader outreach through community workshops. For example, during the summer the team visited a group of campers at the Eco Adventure Camp in Kingston. The workshop covered renewable energy and sustainable living while at the same time challenged the 10-14 year old participants to design their own eco-homes and solar-powered LEGO cars. 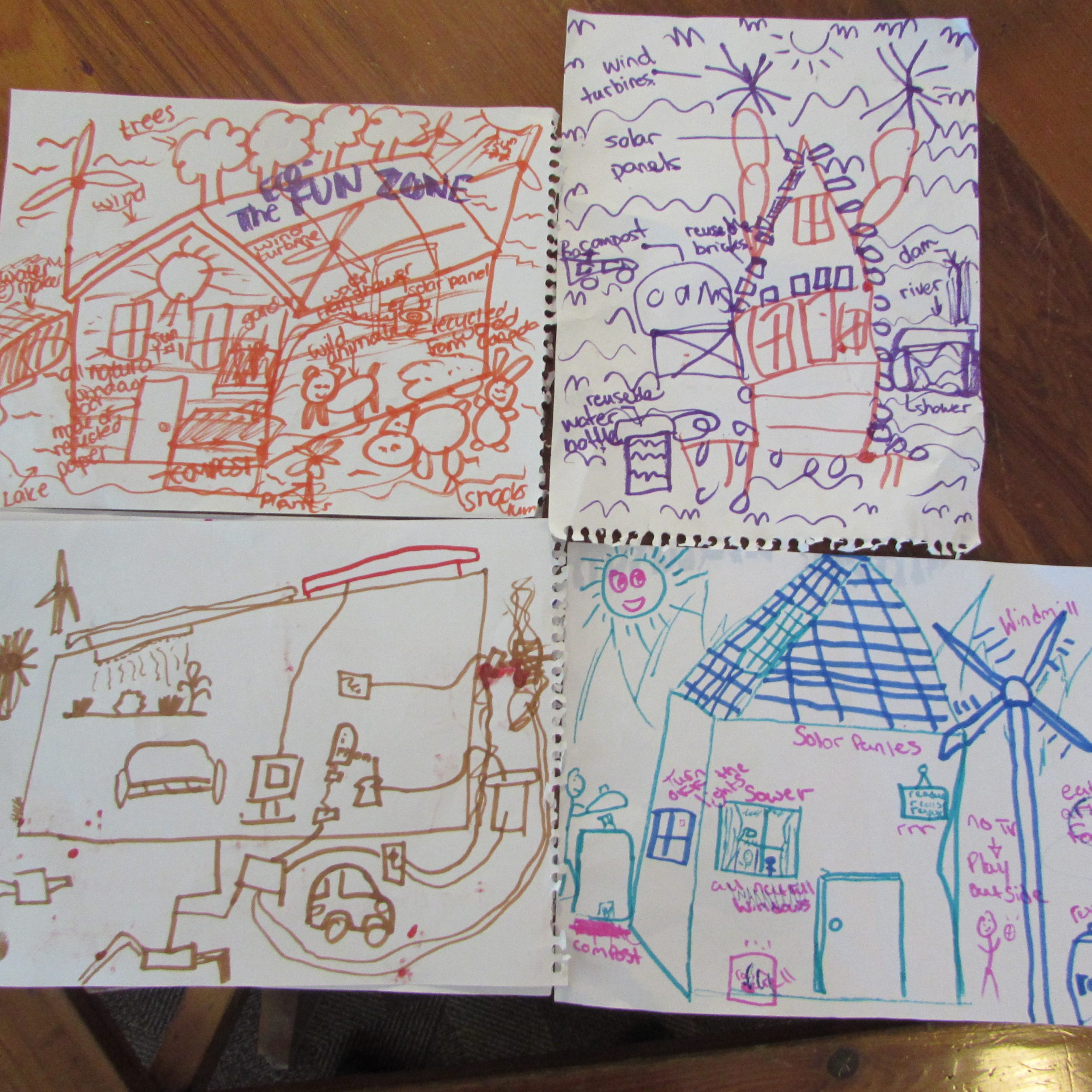 Another part of holding workshops is giving tours to elementary and university students as well as community members. Yang says, “We tell them [about] the technology that’s inside the house and where you can get them, and that they’re already on the market, which shocks people, they’re like ‘I didn’t know that this was already there, there’s a solar powered fridge,’ and they’re quite enamored by a lot of the technology.”

The team’s work also wouldn’t be possible without their numerous supporters, mentors, faculty members and sponsors. The team is especially excited about Bullfrog Power, a renewable energy company,who became one of their sponsors for $15,000 in the summer.

At the end of the day, imagination is what powers the drive for creation. “It’s still a work in progress,” says Yang. “Sometimes we get a little bit carried away when we’re imagining – we’re just like ‘oh we want this house and we want this to be amazing’– I wanted a bunk bed that doubled as a sofa… but we’re not at that stage yet. Although, I did hear that, at one point, there was even talk about a solar powered flat screen TV!”

Veronika Szostak is a student at the University of Waterloo in the Environment and Resource Studies program. She is a volunteer at A/J and aspires to become a journalist, artist, and environmentalist.