The Waakebiness-Bryce Institute for Indigenous Health is the world’s first privately endowed research institute dedicated to the health of Indigenous Peoples. Created last June with a $10-million gift from Michael and Amira Dan, the institute was unveiled on March 23 of this year at the University of Toronto’s Dalla Lana School of Public Health.

The Waakebiness-Bryce Institute for Indigenous Health is the world’s first privately endowed research institute dedicated to the health of Indigenous Peoples. Created last June with a $10-million gift from Michael and Amira Dan, the institute was unveiled on March 23 of this year at the University of Toronto’s Dalla Lana School of Public Health. The name is deeply symbolic for the institute, representing the collaboration between Aboriginal and non-Aboriginal people required to combat the complex health challenges Indigenous citizens face in Canada and around the world.

Waakebiness, “radiant thunderbird from the south,” is the ceremonial name given to neurosurgeon Michael Dan by the Lac La Croix First Nation. Peter Henderson Bryce was chief medical officer with the Department of Indian Affairs from 1904 to 1907. During that time he issued a report highly critical of health standards in residential schools and in 1922 he published The Story of a National Crime: Being an Appeal for Justice to the Indians of Canada.

Jeff Reading is an epidemiologist, a member of the Tyendinaga Mohawk First Nation and the interim director of the institute. He spoke to A\J by phone.

A\J: Why is there a need for an institute like this? What is it about Indigenous health issues that make them different from those of other Canadians?

Jeff Reading: The problems are complex, but issues like mental health concerns and chronic disease are over-represented among Aboriginal people. That in itself is reason to have an institute to try and address the underlying causes of this disparity. The other reason is the special relationship Aboriginals have with the federal government – a fiduciary relationship – that is recognized in the Canadian constitution that flows from nation-to-nation treaties that recognize First Nations, Metis and Inuit as the original inhabitants of Canada.

We need to invest in the long-term health of the communities. Aboriginal populations are the fastest-growing in Canada, it’s important to think about the future trajectory of Aboriginal population growth and the public health programs that can create better health and well-being.

What do you see as the root causes of these issues?

There are many historical circumstances related to colonization and how Aboriginal people were treated by settlers. In Canada, residential schools and the outlawing of ceremonies and language were part of a forced assimilation agenda that was really quite damaging and in a great deal of respects we are responding to the consequences of those actions. Forced assimilation never worked but the types of living conditions that many Indigenous people endure are a result of that assimilation agenda. For example, we know that substandard living conditions predict poor health, and this has been going on for generations so it is now a very complex problem to solve.

I just want to make sure I understood you correctly. You related the agenda of forced assimilation to poor housing conditions. Are you saying that this is part of an intentional agenda to have Indigenous people become part of the mainstream?

You know, in a wealthy country like Canada – and Aboriginal people are relatively few, you are only talking about four per cent of the population – if we decided to narrow the gap we could do it. But in the late 1800s, early 1900s, it was stated openly in parliament that Indians needed to be absorbed into the body politic of Canada. That policy still continues to the present day. The idea was to get rid of the reserve system entirely.

You have to look at what they are doing versus what they are saying. They’ve pulled funding from a host of agencies and organizations that were addressing Indigenous issues – advocating for improved living conditions and health outcomes. They don’t state the agenda of forced assimilation but if you look at the actions … it is hard to conclude otherwise. 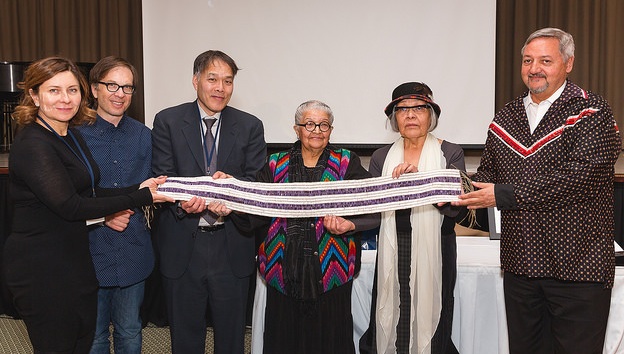 From left to right: Amira Dan, Michael Dan, Howard Hu, Jan Longboat, Madeleine Dion Stout, Jeff Reading at the
naming ceremony at the University of Toronto on March 23, 2015. They are holding a Two Row Wampum.

We’ve looked at the historical context, touched on the social and political context, but is there a geographical context to poor Aboriginal health outcomes?

Yes, of course. You know, more than 50 per cent of First Nations are living off-reserve in urban centres now, so there are health and social issues surrounding urban natives across the country. In places like Toronto you can have large absolute numbers of Aboriginals, but they are still a small percentage of the total population. Whereas in places like Northern Saskatchewan, you’ll have smaller absolute numbers but a much greater local proportion. Then there are Inuit and Metis settlements and over 600 First Nations across the country. It is a geographically dispersed, growing and culturally diverse population with hundreds of languages and different cultural beliefs and ways of knowing. These different situations require community specific engagement.

For a wealthy country like Canada, this should be a fixable problem.

Can you summarize the institute’s approach?

There is a need to look at life in a holistic way that I think of as life-course interventions to promote health. From the preconception health of the mother, to all the life stages from infancy through adulthood to the elders, there is a need for timely, health-promoting and gender-aware interventions. For instance, good nutrition and involvement in sports at an early age have beneficial health impacts later in life. There are also negative interventions that have future impacts – things like taking up smoking, or drugs and alcohol – which need to be discouraged. The positive interventions need to be grounded in the social and economic circumstances of communities and individuals. It is no secret that in some cases help is needed to overcome the corrosive effects of poverty on mental and physical health and well-being.

Bryce published The Story of a National Crime nearly a century ago. Why is it taking so long?

For a wealthy country like Canada, this should be a fixable problem. There was a movement to address this through former Prime Minister Paul Martin’s Kelowna Accord in the last days of the Liberal government. One of the ironies is that much of the wealth of this country – still largely a resource-based economy – comes from the northern and rural parts of Canada. So it’s the people living there whose health is not up to the same standard as in the southern, more urban parts of the country. Meanwhile, forestry and mining take resources from the traditional territories of those people.

Indeed. They don’t just remove the resources from the hinterlands, but they leave a lot of damage behind. They are taking away wealth but leaving terrible legacies of pollution and environmental degradation.

Yes. If the government and industry were interested in sustainable economic development in the North, then instead of ignoring Indigenous people they would partner with them. They would try to increase the number of jobs available locally and try to conduct these industries in ecologically sound ways. What’s happening is that the courts are enforcing the need to consult with Indigenous peoples as they look at the legal and environment impact issues in the traditional territories. These are complicated and interrelated issues around economic development, sustainable communities and how we want to imagine a future that balances these issues.

What are some of the promising ideas coming out of the institute?

One of the promising areas is community engagement, a partnership model between communities and the research and education enterprise. We bring both an Aboriginal community lens and a mainstream lens to take the best of both worlds in order to visualize future solutions. For instance, the institute is looking at having a community advisory board that will guide the priorities of the institute. From the priorities that the communities give us, we can invite international experts into the conversation and look at complex issues like Aboriginal youth suicide where, sadly, Canada leads the world. I think academics have been waiting for that type of invitation, to be able to share their knowledge and gain new knowledge in their work with communities in a respectful and principled way.

Is there any research planned on the role of traditional ways of life in Aboriginal health and wellness?

That’s key to a lot of these issues. There are different traditional belief systems operating and depending on which community, region or historical/cultural aspects we are talking about it varies quite a bit. It really goes back to the terms of engagement we were just talking about, because you can’t say, Well, we have to have traditional knowledge embedded in the process. The only thing you can really do is say is that community engagement has to include the perspectives of the community and scientific excellence so at the end of the day you have good, solid science that is geared to the cultural realities. This way, evidence-based solutions are crafted that are unique and meaningful to each community’s situation.

Absolutely. How people see themselves and their universe is really quite different between various groups and mainstream society. And also, as the environment is being degraded, people are increasingly seeing the value of traditional practices. We need to balance economic development with sustainable ecological practices. There’s a lot of wisdom out there if people are willing to listen and engage.

Is there anything else you would like to add?

We are trying to provide the resources for young people to succeed in the academy. In the past, many Aboriginal people felt that the academy is not there for them and other institutions like hospitals rarely take account of their needs. Progress is going to be incremental as individuals work with larger collectives to make life better. That’s one of the nice things about the endowment that Michael Dan has provided. It’s in perpetuity, allowing the Waakebiness-Bryce Institute for Indigenous Health to grow and have greater influence into the future. That’s what we’re trying to achieve.