Fewer than two hours’ drive northeast of Brussels, nestled among gentle green fields, lies the town of Geel. Here, the model for mental healthcare in a future without economic growth has quietly persisted for 700 years.

Fewer than two hours’ drive northeast of Brussels, nestled among gentle green fields, lies the town of Geel. Here, the model for mental healthcare in a future without economic growth has quietly persisted for 700 years.

In Geel, families take in people with mental health issues as boarders, welcoming them as new family members and supporting their full participation in community life. Boarders are treated as guests, not as patients, the mentally ill, or people in need of psychiatric help. Hospital-based medical care is available in town to prescribe and manage pharmaceutical regimens and to deal with crises, but Geel’s family care system is overwhelmingly non-medical. The families that make lifelong commitments to care for a stranger who has difficulty living independently are frequently unaware of, or uninterested in, their boarders’ official medical diagnoses.

This centuries-old practice stands against the current one, which increasingly medicalizes mental health and social issues. Instead, it offers a community-based alternative that operates with minimal state involvement and limited formal intervention.

Even in countries with universal healthcare, the chance to make a profit continues to determine medical research priorities, trends in professional specialization, and choice of treatment options. According to the Global Forum for Health Research’s report, only 10 percent of medical research funding is directed toward improving treatment for 90 percent of the world’s disease burden. From 2000 to 2011, Pedrique and colleagues found that only one percent of new pharmaceuticals and vaccines were developed to address diseases of poverty including malaria and tuberculosis, with the rest concentrated on cancers, neuropsychiatric disorders, and cardiovascular conditions that disproportionately affect wealthy populations.

Along the same lines, social psychologist Jean Twenge describes how high salaries and better working conditions are attracting medical students away from general practice toward specializations like dermatology that deliver minimal health benefits.

So long as growth is the underlying purpose of the economy, market forces will continue to shape health systems. However, as economic growth slows, the logic of choosing high-emission surgical alternatives or concentrating research funding on illnesses that only affect small segments of the population starts to break down.

It becomes particularly counterintuitive if we consider the long-term negative health effects of rising emissions and subsequent climate change.

Direct effects of increased levels of greenhouse gases and hydrocarbons in the atmosphere include more respiratory health problems, suppressed immune function, and higher rates of allergies because warmer climates favour the growth of allergenic plants like ragweed.

In the most fundamental way, it is impossible to separate human health from the health of the environment.”

In this time of increasing environmental degradation and decreasing economic growth, achieving dramatic improvements in population-level health outcomes is more about directing money to the right places than it is about spending more.

In an article about developing health policies for contexts of slowed economic growth, medical doctor and global health researcher Eduardo Missoni argues that beyond a certain level of spending (around $75 US per person), higher healthcare budgets no longer correlate with increased life expectancy. Instead, people-driven innovations should be the focus. For instance, cohousing and intergenerational care programs that allow seniors living with degenerative diseases to maintain some degree of autonomy could be a better solution to the needs of aging populations than buying more hospital beds.

For many of us, the end of economic growth could inspire new social practices and approaches to health that increase our quality of life. The trouble lies in getting there, from here.

So how do we get there?

A former sheep market at the edge of Totnes, an old town by the River Dart in southern England, now functions as a center for community health and wellbeing. The once empty space for showing sheep now contains herb and vegetable gardens, a pergola, a fruit garden and benches for leisure, while the auctioneer’s office houses gardening tools. 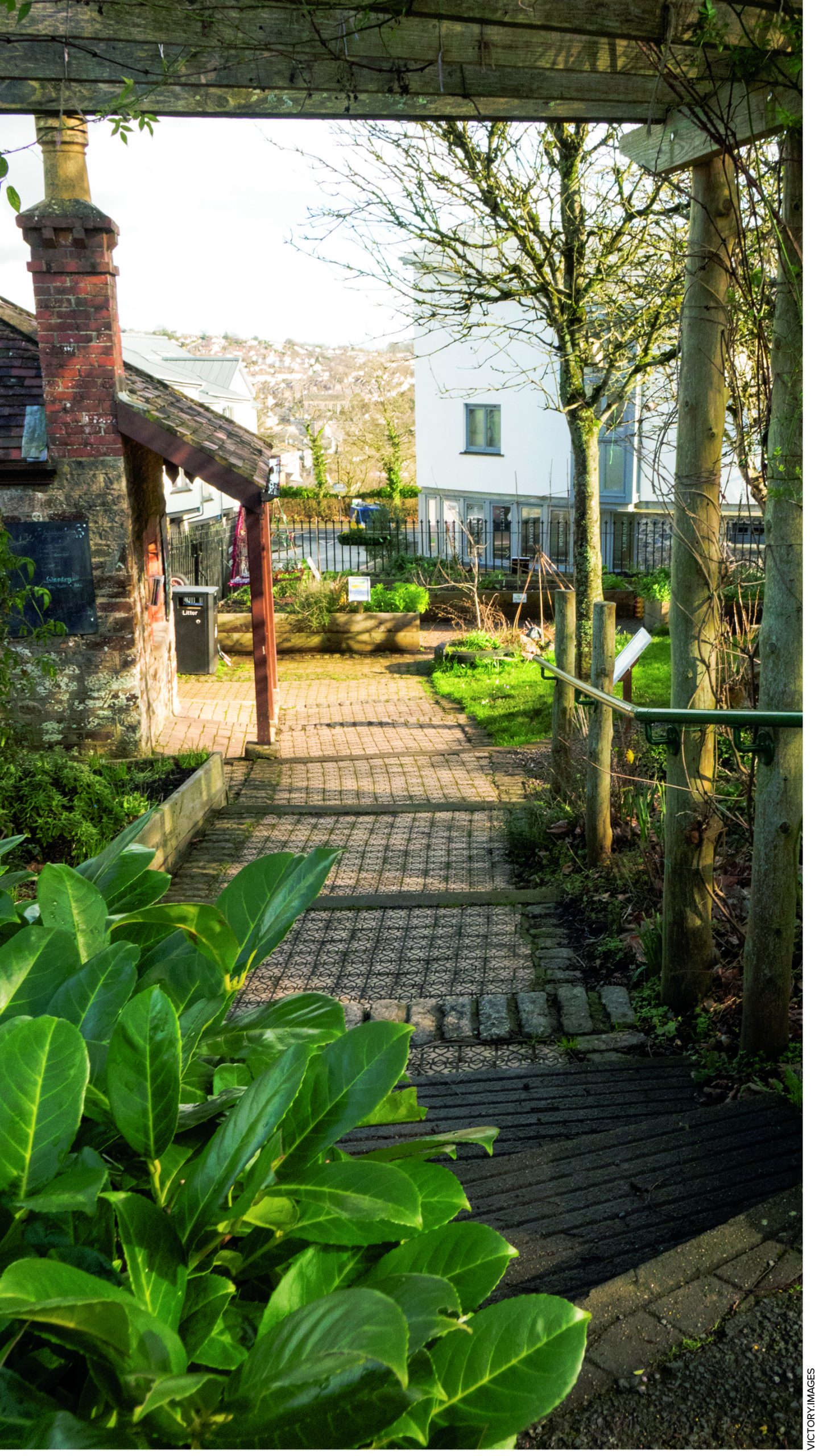 The Lamb Garden is the site of the Gardening for Health initiative in Totnes, UK. Once a site for sheep auctions, the land has been converted into a garden where local physicians and health centres refer patients for much needed “green therapy.” Here, people learn about and practice the therapeutic benefits of gardening.

Local doctors refer their patients to “The Lamb Garden” as it’s now called, to participate in a “Gardening for Health” program to treat vascular diseases and mental health issues such as depression and dementia. Local school children attend classes at the garden where they grow vegetables and learn the basics of healthy nutrition. Open workshops teach community members skills in gardening, healthy eating and environmental stewardship.

The Gardening for Health program is a partnership between the local doctor’s office Leatside Surgery, the University of Plymouth, and a local Community Shared Agriculture teaching program. It fits into the larger goal to increase resilience of local communities.

Counter to the conventional association of wellbeing with ever-increasing material standards of living, programs like Gardening for Health and Transition Towns illustrate how consuming less is not only good for the environment, but can enhance our own health and happiness.

It’s not going to be easy

But let’s not kid ourselves. A community model of healthcare asks a lot from families – much more than the in-patient and supported housing programs that are staffed by professional healthcare providers and are typical in modern health systems.

One National Public Radio article describes the difficult behaviours that Geelians Toni Smit and her husband Arthur Shouten have learned to navigate as they provided family care to boarders. For one man they had to repeatedly chase away the lions he saw coming out of his bedroom wall at night. For another, they had to deflect his overpowering physical attachment and affection for Smit, which had begun to put a strain on her marriage.

In Geel, these behaviours are accepted and managed at the level of social relationships rather than being seen as a justification for removing people from community life. But, while Geel’s family care system draws lightly on state resources, it demands a heavy commitment of time and responsibility from ordinary people.

The tension between the financial and ecological costs of modern healthcare and the expenditures of time and energy at the community level that would be required to support a health system with a smaller environmental footprint is a trade-off we inevitably face in designing sustainable health systems.

In a context of economic contraction, the economic sphere shrinks and the sphere of social reciprocity expands. For health, this means that mutually beneficial exchanges of time, resources and care will need to compensate for a smaller, professionalized healthcare sector. As families and community members, we will have to do more to maintain our own and each other’s health. We will have to depend less on the formal interventions we have come to rely on for everything from childcare to long-term care for the elderly; treatments for depression and anxiety; and medications for an expanding array of conditions rooted in poor diets, sedentary lifestyles and toxic environments.

Fortunately, according to ecological economists Kallis, Demario and D’Alisa in their introduction to Degrowth: A Vocabulary for a New Era, a shrinking economy may free up our time to do just that. Managed effectively by implementing policies like a universal basic income and work-sharing, the end of economic growth could reorient the purpose of economic activity away from consumption and financial profit toward an “economy of care” supported by ordinary people able to spend their time and resources caring for others without being paid, and without compromising their own wellbeing.

With communities looking after more of their own health needs in a Geel-like approach to reciprocal care, formal health systems could focus their resources on population-level health interventions and other activities requiring coordination at a higher scale. These include public health measures such as sanitation and immunization, advanced surgeries, and research to support ongoing innovation in pharmaceuticals and medical technology.

Nevertheless, designing a sustainable health system for a future without economic growth requires significant reorientation of health and care activities. The good news is that the most promising alternatives, like the initiatives in Geel and Totnes, are increasingly found at the boundaries of formal health systems.

Alternatives are emerging in social movements that reinvigorate networks of community reciprocity, in policies that emphasize population health over incremental benefits to individuals, and in preventative practices that recognize the interdependence of human health, community wellbeing and environmental stewardship. These alternatives are accessible, participatory, and are fundamentally dependent on the energy and commitment of ordinary people. Grounded in the principles of ecological economics, including economic relocalization and labour-intensive economies of care, they offer multiple pathways for improving ecological integrity and human health in a future without growth.

In the most fundamental way, it is impossible to separate human health from the health of the environment. When the ecological foundations of breathable air, clean water, and nutritious food are threatened, the prospects for long-term human survival on this planet become increasingly uncertain. But, if we’re willing to contemplate profound redesign of health systems and expand on successful innovations that blur the boundaries of individual, community and ecosystem health, humans won’t simply survive, we’ll flourish.

Katharine Zywert’s doctoral research focuses on health in the Anthropocene, with fieldwork investigating social innovations that have the potential to build resilient health systems for an era of constrained economic growth and social-ecological instability. Katharine holds a Master’s in Medical Anthropology from the University of Oxford and a Graduate Diploma in Social Innovation from the University of Waterloo.

Katharine Zywert’s doctoral research focuses on health in the Anthropocene, with fieldwork investigating social innovations that have the potential to build resilient health systems for an era of constrained economic growth and social-ecological instability. Katharine holds a Master’s in Medical Anthropology from the University of Oxford and a Graduate Diploma in Social Innovation from the University of Waterloo.