Johl Whiteduck Ringuette is the proprietor of NishDish Marketeria and Catering, an Indigenous restaurant in downtown Toronto centred on reclaiming and sharing traditional Anishinaabe food and knowledge.

Johl Whiteduck Ringuette is the proprietor of NishDish Marketeria and Catering, an Indigenous restaurant in downtown Toronto centred on reclaiming and sharing traditional Anishinaabe food and knowledge. One of the country’s leading Indigenous food sovereigntists, Johl’s journey led to him to identify, source, learn and reclaim the traditional Anishinaabe diet. His work in the community, however, extends far beyond the walls of the restaurant. He is highly in demand as a public speaker on food sovereignty, social entrepreneurship, and leads food demonstrations and workshops.

It was in May 2005 that Johl registered Nish Dish as a catering business while he was still working full-time and raising his two kids. Born and raised north of North Bay, Ontario, where forests and lakes were his playground and where his father hunted and fished, Johl is Ojibway on his mother’s side and French-English and part-Mohawk on his dad’s side. He and his five siblings were raised on wild game, fishing, seasonal berry-picks and tapping local maple trees. Part of what inspired the menu for NishDish were his experiences of cooking over the outdoor fire pits at his family’s hunt camps.

When he opened the doors to NishDish Marketeria in April 2017, Johl made GTA restaurant history as the most attended grand opening event; over 800 people filled the 21-seated venue!

The small business is built on serving and promoting traditional Anishinaabe food and Indigenous made products. Beyond simply serving food, the menu itself and restaurant environment provide opportunities for others to learn about Indigenous culture. For example, the restaurant features a 13-moon calendar on the ceiling, which contains important traditional teachings and can be used to direct traditional harvesting practices.

The biggest misconception, says Johl, is the belief that there is no Indigenous cuisine. Among those who do recognize it, many assume it is just game meat. “There are a lot of things to teach about, but that creates the possibility of gaining people’s curiosity because nobody really knows what [Indigenous cuisine] is,” says Johl. It’s an exciting prospect because the food carries teachings with it, so Nish Dish can act as an educational hub of sorts.

“What’s the one thing in this world that everybody shares?” asks Johl, “It’s their food. It brings people together.” 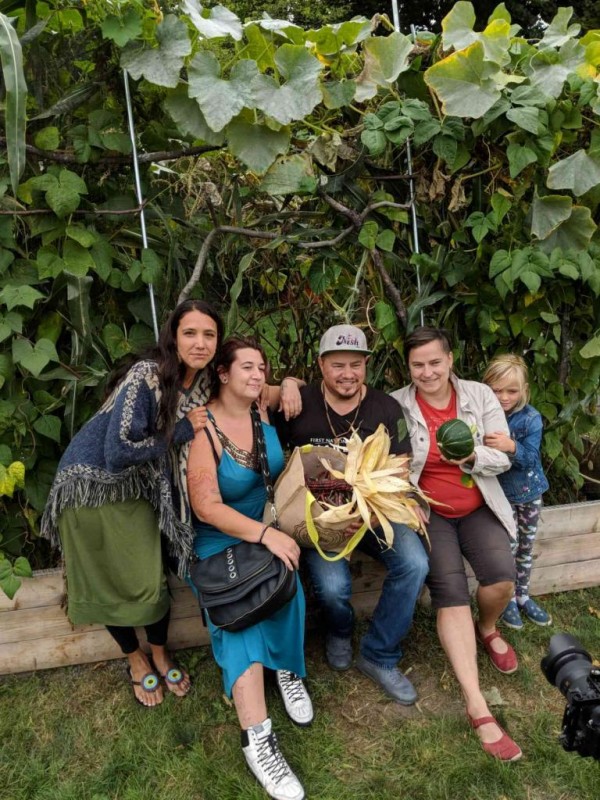 Ashbridges estate 3 sisters harvest in 2018, with some of the gardening team (photo: Ontario Heritage Trust)

In terms of the menu itself, much of it is vegan and gluten-free aside from fish, buffalo, deer and elk dishes. The in-house menu will fluctuate depending on what gets ordered for catering that week.

However, serving traditional food is not without its challenges. Johl will drive three hours just to source one ingredient. Items such as wild rice and white corn are not only almost impossible to source but are also very expensive. In addition, Johl initially faced difficulties in terms of serving game meat. He had to comply with the laws against serving wild game to the public and ensuring purchased game meat that is farmed has gone through a federally authorized facility to inspect the meat. “It’s a hard journey, but we have to do this. We know that this food is the food that we need to eat. We know how important it is to the land that those particular plants continue to grow here in Turtle Island and continue to be available to Indigenous people as well as people who want to have healthy diets.”

Food sovereignty, which is the right for people to have access to culturally-appropriate food, is at the core of much of Johl’s work. Considering the detrimental effects of the residential school legacy and intergenerational trauma, First Nations food sovereignty will take generations to achieve. “There’s a lot of healing that has to be done and the only way that can begin is by talking about the truth of what happened and what’s still happening,” says Johl. He said he recognizes that many Canadians want to have a successful, rich and spiritual connection to the land, but that means they must build a respectful relationship with Indigenous people too – “it’s just logical.”

Before re-affirming his relationship with the land through NishDish and his food sovereignty work, Johl spent nearly 10 years working at Gladue courts under the Aboriginal People Services of Toronto. Gladue came out of Canada’s agreement to determine how to remedy the overrepresentation of Indigenous people in the criminal justice system. Gladue courts, of which there are four in Toronto, offers the opportunity for judges to look at alternative sentencing measures that don’t include incarceration.

“I was working in this court for a long time and it was really draining and taxing and just spiritually crushing,” said Johl. “Watching dockets of Indigenous people going into the system with the odds stacked against them was an incredibly stressful situation”. Gladue plays an essential role in the community for many Indigenous people who don’t have any help, but according to Johl, “it’s a bit of a bandaid to help these gaping wounds from Canada’s treatment of Indigenous people,” and more needs to be done to address the systemic inequalities that lead to the overincarceration of Indigenous people.

Johl visited his medicine teacher, Mark Thompson, for spiritual guidance about the challenges he faced working at Gladue. Mark told him he had another gift, and that is where his next journey would begin. That gift was related to Anishinaabe food, and Johl was asked to pass over his tools from Gladue court to someone else as soon as he was able, so that he could move towards the goal of bringing back the Anishinaabe diet to the GTA. 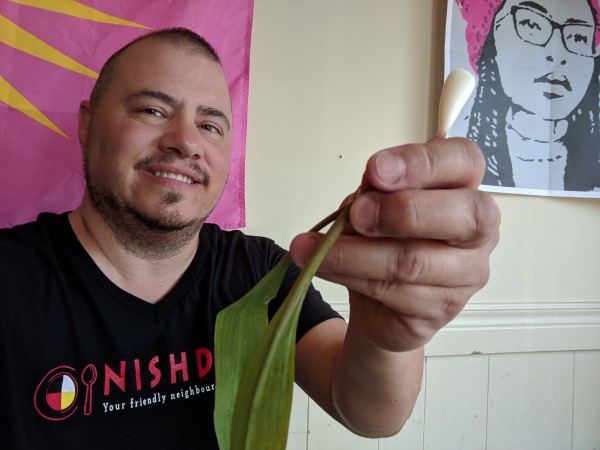 “By bringing [the Anishinaabe diet] into our focus, we bring back ceremony because all food comes with ceremony. And food comes with taking care of the land. We’re land-based people. We have teachings about taking care of the land.” says Johl, “Our role is to take care of everything that comes with it – that’s the water, skies, animals, insects… Everything that comes with the land we have an accountability and responsibility as Indigenous people to take care of. That is part of our spirituality. It can’t be removed from us. We aren’t one without that.”

The Anishinaabe diet, Johl explains, includes the foods that were here, present and endemic to Turtle Island. That includes game meat, but also different fish that were endemic to this territory, and all the plants, like the Three Sisters – ancestral squash, white corn and beans. Johl underscores that Indigenous food sovereignty is closely related to saving and protecting these endemic species; “We need access to more gardens that will not be cross-contaminated by non-endemic corn. We need access to wild rice. It’s been decimated all over Canada. We need safe waters to bring this important plant back – it’s not just specific and essential to our diets but to the wellbeing of the ecology of Canada.”

“It’s a much larger picture than just Indigenous people having access to their food.” Johl says. “It is all Canadians thinking about the number one teaching: every individual is responsible for the next seven generations. How are we doing that? How are we doing that as a nation? Are we looking at what we’re leaving behind for the next seven generations? In this case, talking about food sovereignty, that’s how it impacts the larger picture of Canada. All those foods were endemic to Canada and [it is] necessary to bring them back.”

Passing on His Knowledge

Beyond Nish Dish, Johl plays an active role in not-for-profit Indigenous education and outreach endeavors within and around the city.

In 2017, he created a 20-week curriculum for his own Ojibiikaan Indigenous Culinary Arts Program, a ceremonial land and food-based program. This led to some of the first traditionally planted Three Sisters gardens in the GTA.

With ancestral seeds he was gifted, Johl has been developing an Indigenous seed bank. Nish Dish planted Indigenous medicine teaching gardens around the city and this laid the groundwork for the founding of a new organization: Ojibiikaan Indigenous Cultural Network. This is the only not-for-profit dedicated to Indigenous food sovereignty in the GTA.

The Ojibiikaan Indigenous Cultural Network supports a number of Indigenous community and youth programs in the GTA, including medicine gardens, traditional food gardens, a three sisters garden, rooftop gardens and workshops. The gardens aim to bring back Indigenous agroecological practices. Elders and knowledge-keepers get involved with the projects and planting ceremonies. “There are so many youth looking to learn more about their culture and for opportunities to become participants and contributors in their community,” says Johl.

In addition, the Toronto Indigenous Business Association was founded through Nish Dish in December, 2017. Comprised of Indigenous social entrepreneurs and business owners from the GTA, the organization works to create a stronger, healthier, vibrant and focused Indigenous community in Toronto. Their vision is to create an Indigenous business district and community in Toronto near Christie Pits. “There’s no Indigenous district in the whole country that has been established officially in any city of the entire nation, so it’s a very ambitious goal, but we have every intention of making that happen by next year.” Johl says he hopes to create a district called ‘Nish Town’, short for Anishinaabe Town, where decisions can be made as a community through a more focused Indigenous voice. 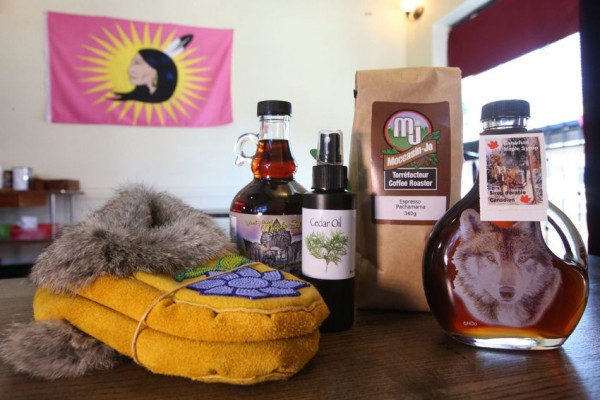 “Without that, we don’t have a focused voice. We don’t have a way to bring the thousands of people who live in the GTA say, we live here, we have a right to a community where we can find access to who we are, we can see representation of ourselves, we can hear our languages in the school.  We need a school that’s ours where our languages are taught, so we can slowly bring back the languages into our next generations,” Johl says, adding that he has many other dreams for the district.

The Indigenous Harvester’s Artisan Market is another pilot project created through Nish Dish. A culmination of the journey of First Nations’ food sovereignty, this market brings together Indigenous people who are still growing and harvesting Indigenous food, like white corn, wild rice, fish, maple syrup, the Three Sisters and sunchokes. The first market was held last October and the City enjoyed it so much, it’s supporting another one for this year. On July 20, it will be held across from Christie Pits, in the heart of where the proposed Indigenous district would be. It will offer community members the chance to participate in trying food and learning about Indigenous culture. “It’s so exciting to know that we can generate this interest and inspire people to come and look at this and try it and support the local Indigenous people of your community,” says Johl.

Johl says he’d like Indigenous restaurants and businesses to keep growing and contributing to the culture. There are currently only four restaurants in the city that are Indigenous. Nearly 60 percent of restaurants don’t make it past their first year, and Nish Dish has now passed its second anniversary. “Against all odds, we’ve really held our ground and we’re still here.”

Next time you are in Toronto, make sure you stop by Nish Dish for a delicious meal!

You can find the menu here:  https://www.nishdish.com/menu

Syerra is currently an Environmental Visual Communications student with Fleming College and the Royal Ontario Museum. She holds a degree in journalism and sociology and hopes to explore new ways to effectively communicate today’s environmental issues.