Alternatives Journal and the Friends of the Greenbelt Foundation are hosting a celebration of the possible expansion of the Greenbelt into Waterloo Region and Wellington County. There’s just one problem: earlier this month, Waterloo Regional council voted for revisions to the greenbelt expansion before agreeing to join. In fact, if these revisions aren’t met, regional chair Ken Seiling says the Region is, “quite happy to be left out.” Sounds serious. Let’s take a closer look.

Alternatives Journal and the Friends of the Greenbelt Foundation are hosting a celebration of the possible expansion of the Greenbelt into Waterloo Region and Wellington County. There’s just one problem: earlier this month, Waterloo Regional council voted for revisions to the greenbelt expansion before agreeing to join. In fact, if these revisions aren’t met, regional chair Ken Seiling says the Region is, “quite happy to be left out.” Sounds serious. Let’s take a closer look.

By now, most people in mid-Ontario know about the Greenbelt. Enacted in 2005, “Ontario’s Greenbelt is an area of permanently protected landscape of prime farmland and natural systems, as well as vibrant communities. It surrounds the Golden Horseshoe, and is vital to the quality of life in southern Ontario.”  (Friends of the Greenbelt Foundation) The Greenbelt Plan curbs urban sprawl and protects natural and rural lands from development in the greater Toronto and Hamilton area.

Preserving the rural and natural land within the Greenbelt positively influences so many intersecting aspects of society: recreation, health, air, water, food, transportation, and the economy to name a few. By curbing sprawl, urban centres must focus on doing more with less, and rather than build out, create vibrant cores with walk-able, transit-centric communities.

These priorities match with Waterloo Region’s, so what’s the problem with joining the Greenbelt? Well, let’s go back to 2004 when Ken Seiling, Waterloo Region’s regional chair and Kevin Thomason, a community advocate with Smart Growth Waterloo Region who wears many hats, travelled to Queen’s Park. They asked premier McGuinty to be included under the newly formed provincial Greenbelt legislation. At the time, the province decided to focus on the inner ring of the Greater Toronto Area for Greenbelt designation, and this excluded Waterloo Region. However, at the same time, Waterloo Region was targeted by the province for a population increase of 15 per cent in five years by in the Places to Grow act.

“Waterloo was left with the worst of both worlds,” says Thomason, “we were getting all of the growth, none of the protection.”

Waterloo Region is unique because it is almost entirely dependent on groundwater, and a population increase puts a lot of pressure on that usage. The Region realized stronger protection was needed for their land and water, and that they would have to do it unsupported by the Greenbelt Plan.

Luckily, because the Region of Waterloo depends so much on groundwater, they have a history of prioritizing the environment, and they were up for the challenge.

“We weren’t being included in the provincial greenbelt,” says Thomason, “so we decided to build our own here and in fact, we’ll even do it better than the province’s because we can learn from their mistakes.”

Over the next ten years, the Region created a set of policies to act as their own “home-grown greenbelt.”  Two policies stand out. The Protected Countryside designation and Countryside Line worked as two complimentary policies designed to protect the entire Waterloo moraine and impose strict boundaries on every urban centre in the region from small hamlets to larger cities. These were enacted in the Regional Official Plan in 2009, among other policies meant to protect the land and water. Developers fought the entire Plan in court after court until a settlement was reached in 2015.

“Thank goodness the region spent millions of dollars defending [the ROP],” says Thomason, “but because of it, we now have this interesting situation coming full circle. Our local protection is so good that it might actually even be better than parts of the Greenbelt…we need to make sure the strongest of either [policies] prevail and that the Greenbelt doesn’t erode or degrade our local protections that we’ve spent millions of dollars in the last 15 years working on.”

This is why Ken Seiling and the regional council voted for revisions. But what kind of revisions are they looking for exactly?

In the Region’s February 28 report sent to the province in response to the Growing the Greenbelt proposal, they are asking for the following:

The full report can be read on the Planning and Works committee meeting agenda on pages 39 to 49 here.

How likely is the province to meet the Region’s requests? The provincial minister of municipal affairs Bill Mauro sent a letter to Waterloo Regional Council saying, “If we were to move forward with a Greenbelt expansion, we would work with the Region of Waterloo to ensure that a new Greenbelt boundary does not result in a reduction of existing local protections. That may include potential changes to the Greenbelt Plan if they are needed.”

You can view the whole letter here. 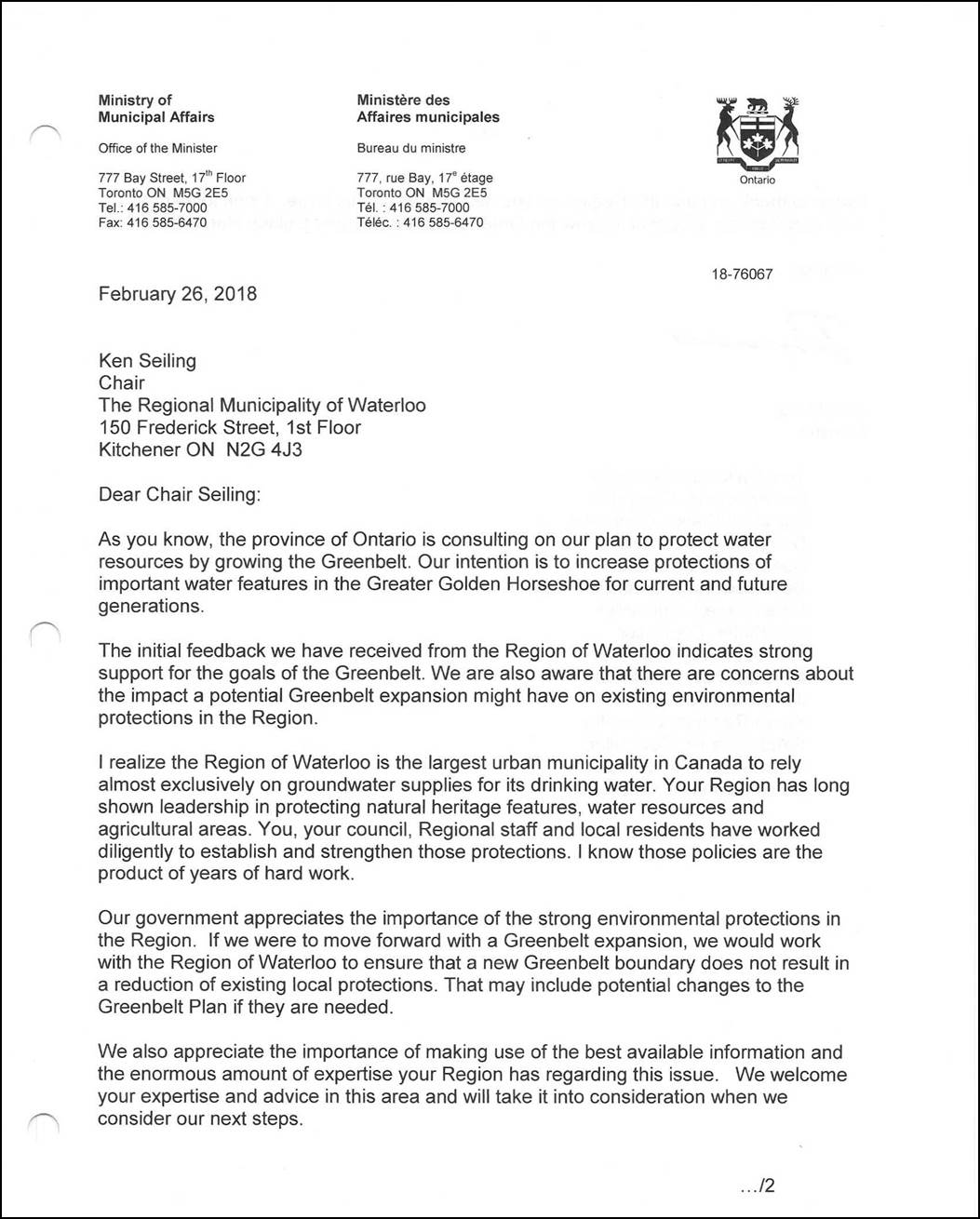 Interpretations of the letter differ. Kevin Thomason is optimistic. He says, “you’re not going to be getting a clearer message, and it’s highly, highly unusual for a minister to send a letter to ever single Councillor saying that I’ve heard your concerns and we’ll work with you on them. We’re very lucky to have exactly what we need to have happening which is the province is offering to work with the region to make sure the right things happen.”

While all of Waterloo’s townships and cities have agreed to the Region’s legislation over the past ten years, Thomason feels the missing piece in the Region’s current protection is the province. “This opportunity for Greenbelt expansion is bringing the province to the table and in fact frankly, all of these local protections we developed always anticipated eventual Greenbelt expansion for reinforcement. We need a strong second layer of protection. We need the permanence that only the provincial government can bring.”

Seiling doesn’t feel that way. He feels local legislation is stronger than provincial because citizens are quite active on the local level, while provincial legislation is not conducive to citizen participation, and decisions can be made with little or no citizen input.

Ultimately the best of both protections is what needs to happen in the Region of Waterloo. Both parties have the same goal – to curb urban sprawl and protect our green spaces and water.

While the deadline for this round of citizen feedback on the Growing the Greenbelt proposal has passed, it’s still up to us to keep the momentum on this proposal going.

“The most important thing is that these large-scale, land-use planning decisions only happen once or twice in a generation.” says Thomason. “There’s a lot of money at stake – a lot of developers, a lot of people out there who are speaking with chequebooks and you know wallets and that sort of thing. That’s where we need to make sure that the public has an equally strong voice and is part of the process, and that every citizen is speaking up for the future that they want to see. If not, there’s plenty of others who will speak up for an alternative future.”

Tell your local MPP you care about the greenbelt, and that implementing it should not undermine current Regional protections.

Leah Gerber has always been pretty nosy. Sometimes she still has trouble distinguishing between being curious and being rude. She loves exploring Canada’s nooks and crannies, especially on a bicycle. Her goal is to tell stories, visually and with words, that inspire change in our world, even just a little.