Half a century ago, a sea disappeared in Central Asia. The Aral Sea was once the fourth-largest lake on planet Earth. It was fed by two rivers – Syr Darya and Amu Darya, until Soviet leaders redirected these rivers to irrigate cotton fields in the 1960.

Half a century ago, a sea disappeared in Central Asia. The Aral Sea was once the fourth-largest lake on planet Earth. It was fed by two rivers – Syr Darya and Amu Darya, until Soviet leaders redirected these rivers to irrigate cotton fields in the 1960. The sea vanished, but the people remain on its banks, hopeful the sea will one day return to renew life.

The Aral is more than a sea. It is a sore spot of Central Asia. It is a wounded area where seven million people live. It is three generations born on the banks of a sea they have never seen. It is a lifeless desert. It is sand that covered the villages of fishermen and destroyed their homes. It is a cemetery of rusted ships. It is poisonous lakes, which no one can find on the maps. It is a bare sea bottom; a volcano emitting salt and chemicals into the atmosphere. Pesticides from the Aral Sea are found in the blood of Antarctic penguins. The poisonous concoction from the bottom of the sea have settled on the glaciers of Greenland, Pamir and Tyan-Shyan; the forests of Norway and the fields of Belorussia.

The dried-up sea belongs to two countries – Kazakhstan and Uzbekistan. The government of Kazakhstan separated and preserved its tiny part of the Aral.

In 2005, a dam was built in the narrowest part of the sea – Kokaral island. For the first time, people were able to cut off the entire sea. Over a couple years, the Small Aral filled up with water and fish. The fishermen prepared their fishing nets. It became a drop of the former sea; only five per cent of its size. Nevertheless, about 10,000 fishermen have been fishing in this tiny water reservoir and exporting their catches to Russia and Europe. The Kokaral dam saved the Small Aral at the cost of losing the rest of the sea. The dam cut the sea off of its only water source, and the biggest part of the Aral – the part belonging to Uzbekistan – completely dried up.  Although, the government of Uzbekistan is not rushed to restore the Aral. On the bare sea bottom, they found treasures – oil and gas. If the water returns, it would complicate the work of the oilmen.

The Aral Sea in Photos

Half a century ago, the Aral Sea supplied the entire Soviet Union with fish. There were ports and fish processing plants. The memory of past catches remain in the history museum of Aralsk. Near aquariums, schoolchildren are told about their great-grandfathers who were fishermen. 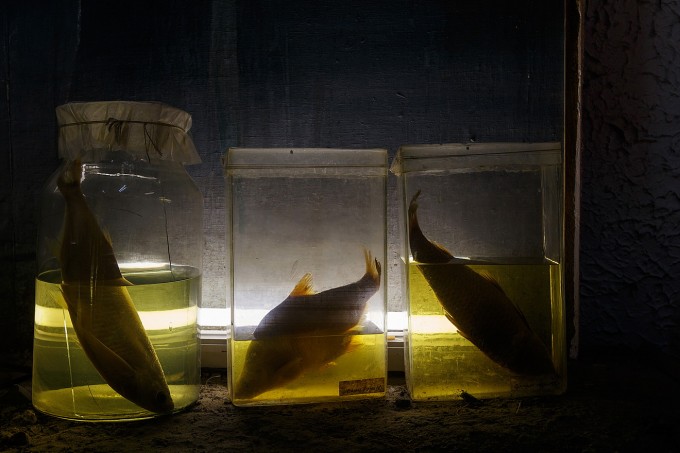 Tourists from different countries come to see the consequences of human action on the natural world. Where people used to move in boats, now you can only drive a jeep. On the right of the photo are steps that formed during the retreat of the sea. 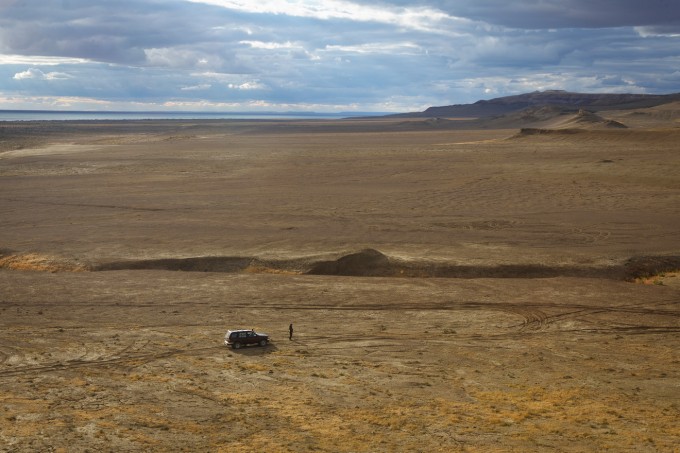 The main port of the Aral Sea in Aralsk city. Three old ships were painted and placed on stands as a memento for future generations. These days, cows pasture in the “sea.” 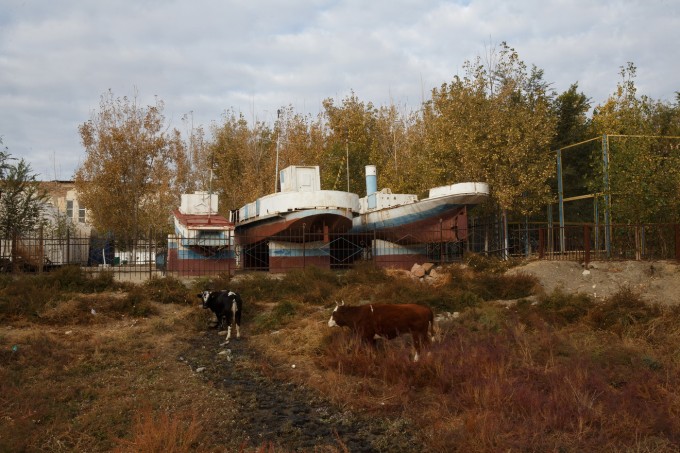 Azamat, a student from Aralsk city, on the deck of “Lev Berg,” the “smartest” ship of the Aral Sea. The trawler was repurposed for scientific research. It used to take scientific expeditions across the Aral Sea. To the left of the ship, there are famous cranes of the Aral Sea that used to load fish. Rusted cranes can be seen from any part of the city. Locals call them “gansans,” by the factory name which produced the cranes. 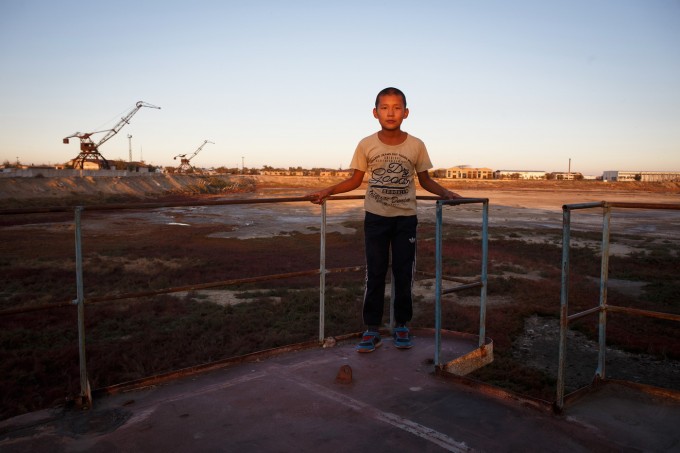 The most popular touristic place is the “cemetery of the dead ship.” The cemetery disappeared five years ago but information about it is still found on maps. It is too late to take a selfie in front of the Aral fleet. Local people took apart all 12 ships for recycling during the same year the British rock group Pink Floyd made their final goodbye video called “Louder than Words.” It was the last song for a studio album by the musicians and the last video for the fleet.

This barge was abandoned on the shore of the Butakov bay. Gardens had been growing inside it, but it was recycled one month ago. 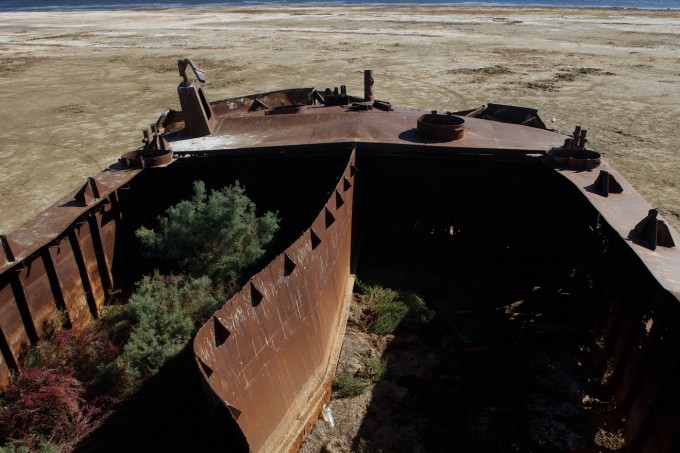 Akespe, a fishing village on the shore of the Aral Sea. When the sea disappeared, sand covered up the houses of the village and destroyed fishermen’s homes. They left the village and started a new settlement called New Akespe three kilometres away. 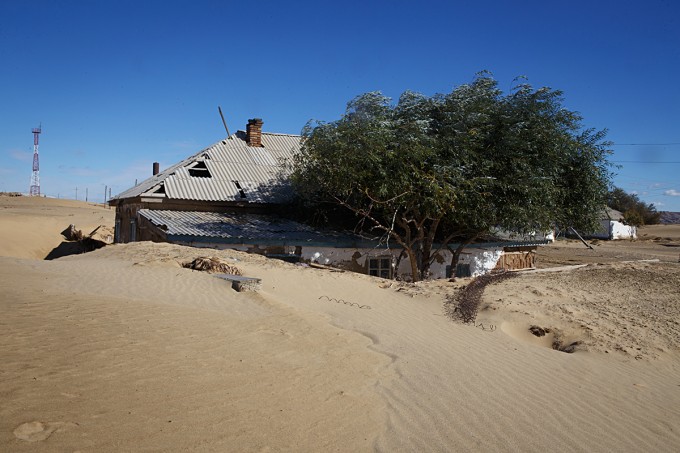 Pregnant with her fourth child, Tursun stayed in the old Akespe. There are no jobs, no schools, no shops, no hospitals and no water pipeline in the village of 10 houses. The kids go to school in the neighboring village and her husband works shifts in Russia. 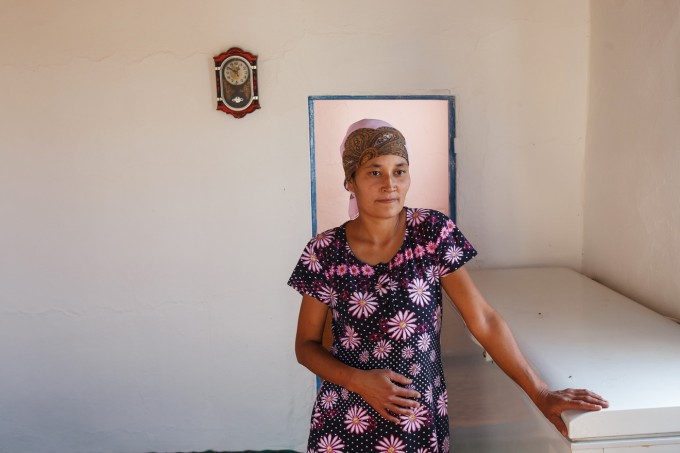 10-year-old Kalsar from Akespe compares her village to a huge sandbox. Sands gets into her throat, eyes and hair, but Kalsar loves her home. She has heard about fishing from her grandfather, an old fisherman, and her dream is to fish with him one day. 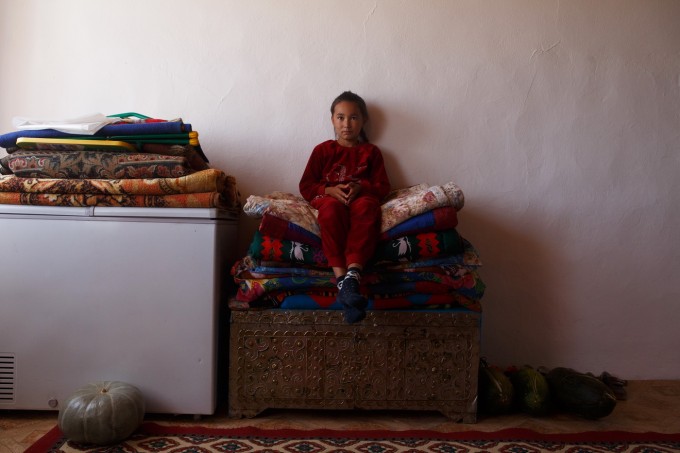 Tastubek, a fishing village 90 kilometres away from Aralsk city. When the sea dried up, the village died and the fishermen went to the cities of Kazakhstan to work on construction. When the Small Aral revived, the fishermen returned back home. The village grew. People in Tastubek still have no water pipeline or shops. They bring water from a nearby farm and buy bottled sparkling water and cigarettes in one of the local fisherman’s house. By the standards of the Aral region, Talstubek is a wealthy village – people fish and raise camels here. 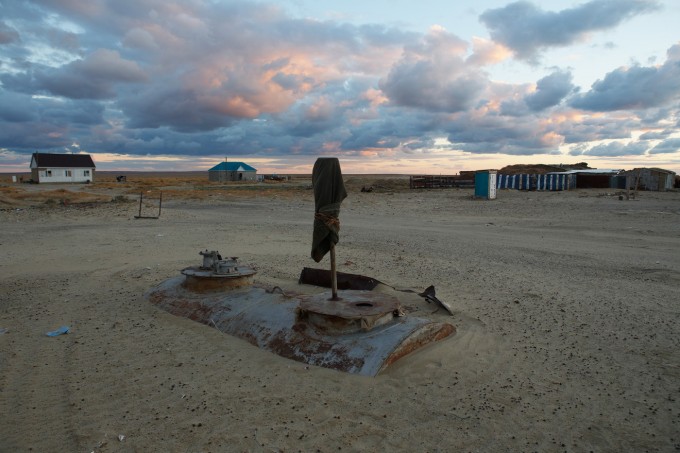 Seashore of the Small Aral. Uhumbek, a fisherman, goes into the sea to check on the catch. There was a storm the previous night, but he threw in the nets, risking his life. He brings all the fish he catches to the main fish collector. The highest price is given for carp and pike-perch. 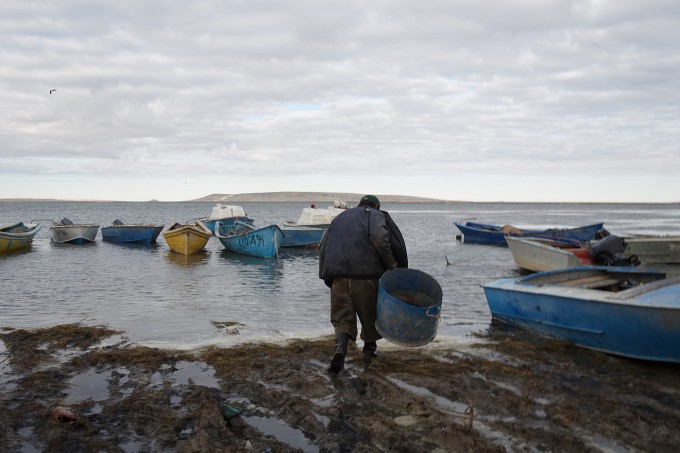 The manager of the fishermen, Bakhodir Jinaliev, insulating the ceiling of the dugout. Young men come here from Kyzilorda and Aralsk for two week shifts. They live in dugouts of three to eight people. Roofs are equipped with solar batteries, and there are bare necessities for living long-term, including a landline phone in the house, under the ground. 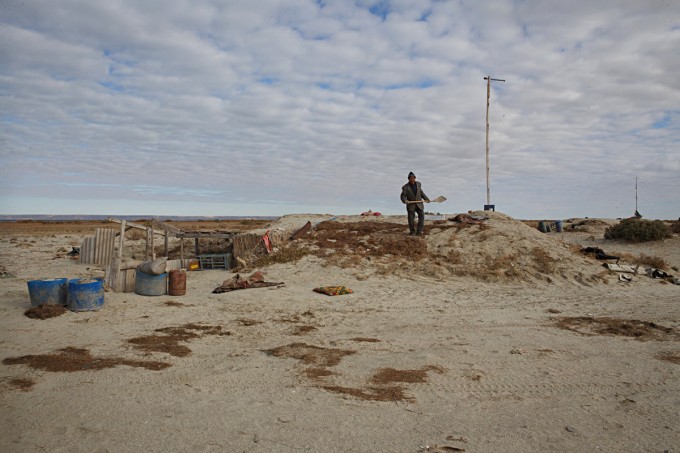 The dry bottom of the Aral Sea is covered with salt, pesticides and harmful chemicals. Salty crust is on the top, but under it, there is sinking mud. 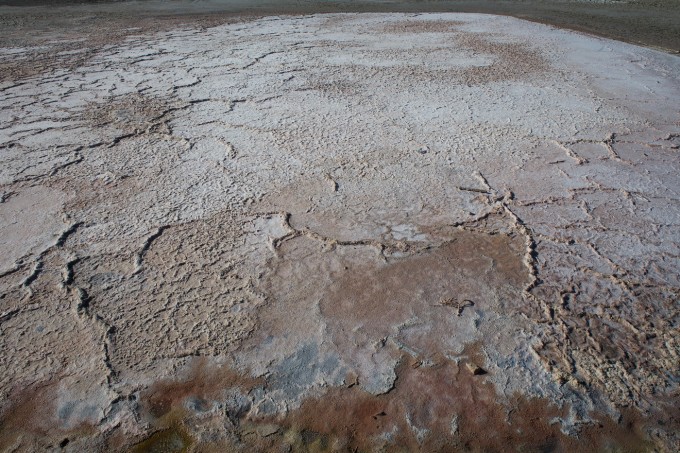 The old Christian fishermen cemetery in Aralsk is covered by sand. Instead of tombstones, there are lighthouses and anchors.  An anchor is a symbol of remembrance; a lighthouse is a symbol of hope. People do not come here. After the collapse of the Soviet Union, Russian families left Aralsk. It is dangerous to enter the cemetery because wild dogs guard the tombs. 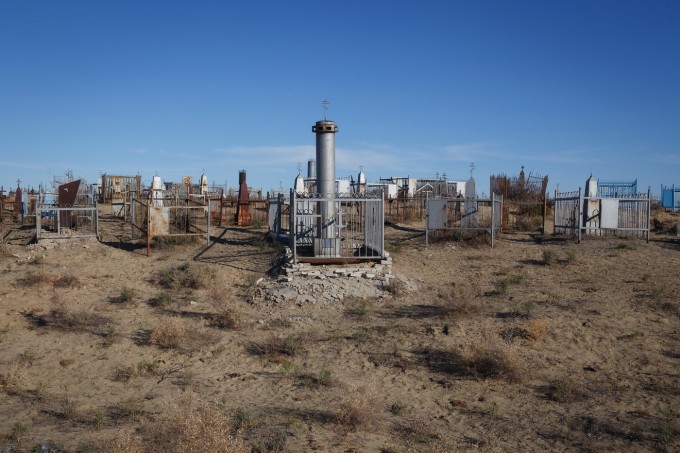 The irony is that the salt killed all life in the Aral Sea, and at the same time, the salt is what is passed on from one generation to another as an inherited treasure of this land. Twenty-two kilometres away from Aralsk, in the Jacksikilish lake, the biggest salt reserves of Kazakhstan are concentrated – it is 20 kilometres of “white gold.” Salt for cooking has been produced here for about 90 years. The reserves are sufficient for many generations to come. 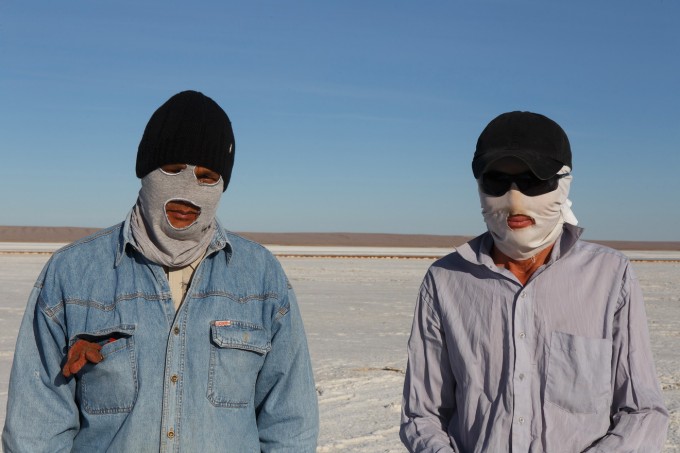 Zhaksykylysh village on the shores of the Aral Sea. Locals remember how they learned to swim in the Aral Sea. At school they were taught that everyone should be sailors. They left the house and dove into water a few metres deep. It was salty – the locals believed that it was medicinal and took salt baths every day. Only salt remains from the sea. From afar, it glitters like water. But this is a mirage. 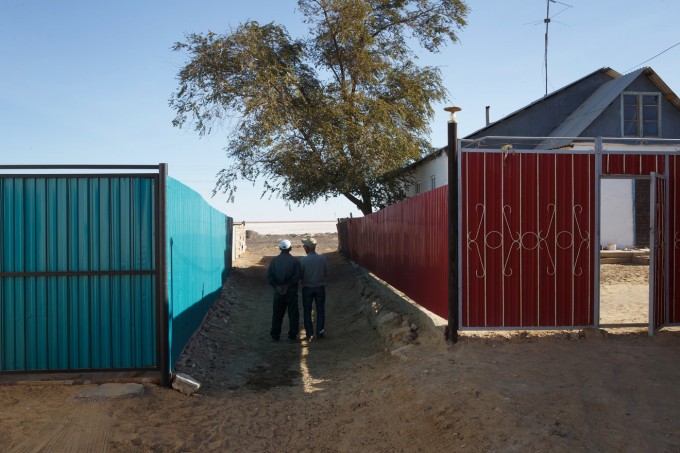 The Aral will not return in the close future, but, hopefully, the life in the Aral will be revived. Kazakhstan and Uzbekistan have been planting saxaul on the bottom of the sea. This is the only tree that will grow in these salty sands. In 10 years, bushes of saxaul will cover the bare bottom of the sea, consolidate the sand and harmful chemicals, and prevent them from being blown away into the atmosphere. One bush of the saxaul plant is able to consolidate around itself up to 100 tonnes of salt deposits. The roots of saxaul will draw up water from underground and hydrate the desert. Once again there will be grass, insects, rodents and the rest of the ecosystem. If there are pastures, there would be livestock-rearing. Saxaul is a unique plant and embodies big hopes for life around the Aral Sea.

The Aral Sea has taught people important lessons about how humans can destroy nature, but also how they can try to restore it. Unfortunately, not everyone has learnt these lessons. Due to human fault, the story of the Aral Sea is being repeated in the other world major water reservoirs, such as the Salton Sea in California and the Chad Sea in Central Africa. The Chad Sea has almost vanished, leaving people from neighboring countries to fight over the remaining water. Ecologists are becoming concerned about the Baikal lake, the cleanest and the deepest lake in the world, as Mongolia is planning on building three hydroelectric stations on the Selenga river, which flows into the Baikal lake.

Iulia Galushina is a documentary photographer and journalist from Russia. She currently resides in Uzbekistan.