Picture a towering garden overflowing with native wildflowers. Add a Hobbit hole, an Ewok village, an airplane and a pirate ship all made from recycled and repurposed materials. Weave it all together with a network of winding trails and hidden treasures, and what do you get? The most fabulous natural play space you can imagine!

Picture a towering garden overflowing with native wildflowers. Add a Hobbit hole, an Ewok village, an airplane and a pirate ship all made from recycled and repurposed materials. Weave it all together with a network of winding trails and hidden treasures, and what do you get? The most fabulous natural play space you can imagine!

Shauna Leis and Kirk Bergey have been designing and manually constructing this magical landscape – or “playscape” – in Wellesley, Ontario, for over a decade. As their two young children flitted around like woodland fairies, we toured the garden and learned some of its secrets.

In 2005, Richard Louv published Last Child in the Woods: Saving our Children from Nature Deficit Disorder and brought popular attention to the importance of reconnecting children with nature. In a time and place of rapid urbanization, individual efforts to create and sustain natural spaces that welcome children have become critically important.

Spending time in nature has remarkable benefits for children’s health that researchers are only starting to explore.

Spending time in nature has remarkable benefits for children’s health that researchers are only starting to explore. Norwegian researchers found that when children play in green spaces, they are physically active in diverse ways, engaging a variety of muscle groups as they run, jump and climb. Play becomes more creative when children interact with loose parts that are inherently provided by natural settings. They even get along better, as there is less competition for resources and space. Time in nature has been tied to decreases in stress and anxiety, as well as improved attention. There are even studies demonstrating a link between time spent in nature and better vision, and a possible link between soil bacteria and learning ability.

While everyone’s health clearly benefits from time in nature, the long-term sustainability of our natural environment relies heavily on how today’s children understand and interact with the world. Children who spend time in nature develop a sense of responsibility for its welfare. Nature can become something familiar, reassuring and expected, rather than the occasional novelty. Providing children with these types of experiences will help ensure the survival of the natural world, as they grow up to become planners, politicians and parents.

Despite these benefits, efforts to preserve natural spaces often revolve around the intentional exclusion of little feet and hands. Children can, of course, do significant damage to a landscape. However, I would argue, with a little creativity, there are countless ways to promote harmonious interactions between the two. Shauna and Kirk have created that harmony right in their own backyard. The family spends most of their time outside. The children are entirely comfortable and spend their free time exploring, playing, building, creating and imagining here.

Our tour of the one-acre garden begins with a lovely circular vegetable patch. The children are heavily involved with the planting and care of the vegetable garden from choosing the seeds to harvesting the rewards. The garden is bordered on one side by an arbour tunnel hosting both grape vines and a swing. On the other side is a fantastic play structure nestled in the trees. The structure features an “Ewok village” with bridges, ropes, planks, and multiple platforms. Attached are a pirate ship and airplane just waiting to play a role in daring adventures. 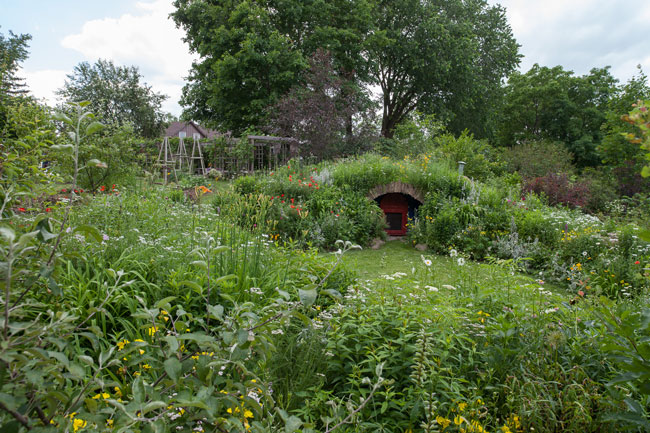 Next we explore the winding paths that meander through gardens of native species, downhill toward a pond. Along one path, we find a Hobbit hole nestled into the side of a hill, with a small round entrance leading to an underground playhouse. Following the network of trails, we come across a tunnel and plenty of other surprises – hanging guitars, a sunken chair, a bicycle. In winter the paths are converted into a speedy luge track.

Given this enticing natural setting for play, the children who live here are likely to develop an understanding and comfort with nature that is unusual in today’s society.

During the interview, our hosts offered a few tips on building natural playgrounds.

While this particular project took shape on an acre of land, natural playscaping doesn’t require a great deal of space. With a little imagination and some reclaimed materials, an appealing natural play space can be built almost anywhere, at very low cost.

There is a magic in this garden that is surprisingly difficult to capture with words or even pictures. As we watched the children dance around the yard, it was clear that some of its magic has been transferred to them.

Catherine McAllister completed her doctorate on the connections between children, nature and the community at the School of Planning University of Waterloo.