Some people, when handed lemons, make lemonade. Other people, like family farmer Bern Kotelko of Alberta, redefine what it means to get lemons, reframe the challenge of making juice from them, and create something far more useful and self-sustaining than lemonade. At least, that’s what Kotelko did when life handed him 500 tonnes of cow poop per day.

Some people, when handed lemons, make lemonade. Other people, like family farmer Bern Kotelko of Alberta, redefine what it means to get lemons, reframe the challenge of making juice from them, and create something far more useful and self-sustaining than lemonade. At least, that’s what Kotelko did when life handed him 500 tonnes of cow poop per day.

Kotelko didn’t just see a mountain of manure – he saw an opportunity to turn “shit into Shinola.” Or more specifically, turn it into biogas, electricity, heat and fertilizer. “I always think of my grandfather and what he taught us about agriculture,” says Kotelko. “He did things in a sustainable way. He grew his own energy to produce food because he had a team of horses and so now we’re doing it at just a little different scale and using some different technology. But what we’re doing is producing our own energy so we can produce food.” 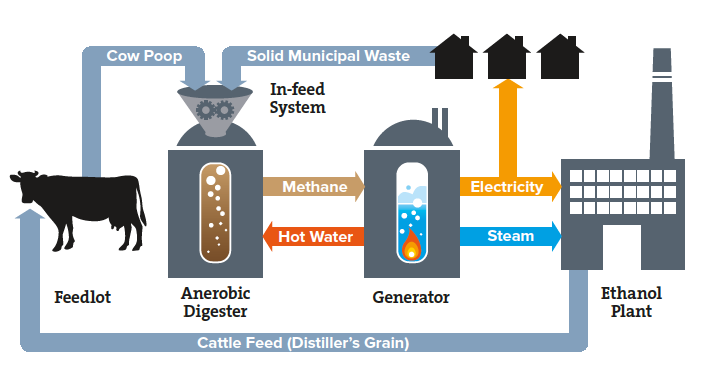 The virtuous loop: Manure from livestock – fed with grain by-product from the ethanol plant – provides the methane used to power the plant and provide surplus electricity to the community \ nik harron.

Canada’s first Integrated Bio Refinery™, Growing Power Hairy Hill, uses a “virtuous circle” of technology to link a cattle feedlot, an anaerobic digester and an ethanol plant. The ethanol plant produces wet distiller’s grain as a by-product, which gets fed back to the cattle, completing the virtuous loop.

The anaerobic digester, as well as consuming all of the cow poop, takes another 200 tonnes of organic waste each day from several area municipalities. The organic waste has three times the energy by volume as the manure. The business partners conceptualize this as adding value to both streams of waste by “mining” them for their energy. The methane produced by the digester is burned in a 2.5-megawatt electricity generator, creating sufficient electricity for the 2,500 homes in the local community of Vegreville. The generator produces what lesser thinkers might imagine as surplus – wasted – heat. But Kotelko added a fuel-grade ethanol plant to soak up this extra heat, because nothing is waste when you look at it the right way. The plant is responsible for creating 40 million litres of ethanol per year that is sold to refineries in Edmonton.

Trever Nickel is the general manager of Himark Biogas, the company that designs the technology used at Growing Power. He says that if Alberta’s “very low” carbon price of $15 per tonne were to increase to $35 or $40, there would be an opportunity to finance many more of these plants in the province. For instance, Germany offers a feed-in-tariff to producers and has over 6,000 digestors. By contrast, Alberta’s two biogas and co-generation plants (the other one is in Lethbridge) make only a fraction of the 265 million litres of fuel-grade ethanol mandated to be used in the province.

A slightly different configuration with the same creative mindset is operating in Chatham, Ontario. The Devries family farm sells corn to GreenField Specialty Alcohols, a biorefinery that produces 200,000 million litres of ethanol per year. Not only do they buy back distiller’s grain to feed their cattle, but they are planning to take the heat and CO2 created by the ethanol plant – from their corn – to heat their greenhouse and grow up to 5.85 million kilograms of tomatoes per year. Sustainability can be as simple as seeing the lemons around you in an entirely new way.