While many of us aspire to buy all our food locally sourced and organic, grocery stores trips are a still a common reality, especially in the winter. We’ve put together some tips to help you make the best-possible choices while you’re there. To focus on wholesome foods, individuals are often encouraged to “shop the perimeter.” Produce, meat, dairy, and bread are typically placed on the perimeter of the store while processed foods are more often found in the aisles.

While many of us aspire to buy all our food locally sourced and organic, grocery stores trips are a still a common reality, especially in the winter. We’ve put together some tips to help you make the best-possible choices while you’re there. To focus on wholesome foods, individuals are often encouraged to “shop the perimeter.” Produce, meat, dairy, and bread are typically placed on the perimeter of the store while processed foods are more often found in the aisles. This sage advice is a good start, but let’s dig a little deeper. The next points are meant to help shoppers take a closer look at what’s behind labelling regulations in Canada.

Let’s start with the basics: packaged food labelling. The first step to better understanding your food is to read the list of nutrition facts and the ingredient list, which the Canadian government requires on food products. Health Canada has introduced changes to labelling regulations, which affect the nutrition facts panel, ingredients list and food colour additives. The new requirements are already in effect, but industry has a five-year transition period ending in late 2021 to implement the changes.

Serving size and calories are now in larger print. Suggested serving sizes are now more realistic. This is a welcome change to everyone who eats more than two chips. Common household measurements like cups and tablespoons will be paired with metric equivalents when possible. Foods that come in pieces will reflect the number of pieces per serving, or a fraction of the food, along with the weight in grams. Foods in single serving containers will show values reflecting the entire container.

The percentage of daily values reflect updated science. Vitamin A and C have been removed from the panel because most Canadians get enough in their diet. Potassium, essential for fluid and electrolyte balance, has been added alongside calcium and iron.

The labelling updates are helpful but consumers should always educate themselves based on individual needs instead of relying on broad government guidelines. Total sugars now show a percentage of daily value even though it is not a required nutrient. Canadians are encouraged to compare all values to the new contextual footnote: 5 percent or less is a little, 15 percent or more is a lot. Total daily sugar value is set at 100 g (24 teaspoons) per day but this is what Canadians already consume, on average. Contrast this with the World Health Organization’s (WHO) suggested cap of 50 g per day (approximately 10 percent of daily calories). A 500 ml bottle of Coca-Cola contains 55 g of sugar but Canadians will see it as amounting to just over half of their daily sugar value, instead of more than 100 percent of the WHO recommendation. There is also no mandated differentiation between naturally occurring and added sugars.

Consumers will see stylistic changes here as well. Important changes include grouping of sugar-based ingredients and listing of food colours by their individual common names. Readers should note that high fructose corn syrup is typically labelled as glucose-fructose in Canada. Given the number of aliases for sugar like syrup, molasses, concentrated fruit juice, maltodextrin, malted barley, etc., the sugar grouping ought to help consumers better discern actual sugar content. Sugar consumption is increasingly discouraged, replacing fat as the dietary bogeyman, because it is blamed for fuelling inflammation and chronic disease, including heart disease.

“Colour” was previously a catch-all and named colour additives will be welcomed by those who avoid a specific food colouring.

Now that we have briefly reviewed basic nutrition labelling in Canada, let’s turn to common health and ecological questions.

Genetically modified (GM) foods are not labelled in Canada. Genetic modification here refers to foods whose genetic makeup has been modified using gene splicing and modification, or transgenic technology (genetic engineering). These changes cannot occur in nature or through traditional crossbreeding methods.

Common GM crops, though not all approved for production in Canada, are alfalfa, canola, corn, cotton, papaya, soy, sugar beet, and zucchini/yellow summer squash. Papaya and squash are modified for resistance to viral disease. The majority of other GM crops are modified to resist the application of herbicide and to resist insects. These seeds are typically “Roundup Ready”, meaning that they will be resistant to the application of glyphosate, the active herbicide ingredient in Roundup.

Broadly speaking, proponents argue absolute safety to humans. Critics argue that glyphosate is carcinogenic and toxic to beneficial microorganisms in humans, contributing to conditions like autism and inflammatory bowel diseases, including gluten intolerance.

Readers may be surprised by glyphosate’s ubiquity. It is used as a desiccant (drying agent) on most conventionally grown grains and legumes. It has a number of agricultural uses, including the abovementioned application before harvest to create uniformity of (drier) plant material and to assist with pre-harvest weed control. Individuals relying on indications like the voluntary “Non-GMO Project Verified” label should reflect on whether it is GM foods or glyphosate they seek to avoid. If the latter, organic foods will only satisfy this preference to the extent they are uncontaminated. 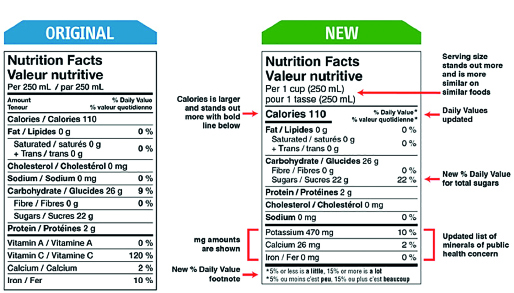 The new labelling is helpful but consumers should educate themselves on their personal needs. The Canadian sugar guideline is twice the WHO’s recommendation.

A newly introduced American label might satisfy those who worry about contaminated organics. The Detox Project has launched a voluntary certification program for manufacturers who wish to assure consumers that their food is glyphosate-free, measured to the lowest possible limits of detection (0.01 parts per billion). The label, pictured here, is self-explanatory.

While awaiting adoption of the label, readers may be interested in Tony Mitra’s Poison Foods of North America. He obtained thousands of glyphosate testing records from the Canadian Food Inspection Agency (CFIA) and compiled results into a book available online. The government has not made the information public, reporting only that testing revealed compliance with established maximum residue levels. According to Mitra, corn and its products appear to be far less contaminated by glyphosate than other crops like wheat or chickpea.

There is little discussion about food irradiation in Canada despite its longstanding use for treatment of onions, potatoes, wheat, flour, spices and dehydrated seasonings. Health Canada recently announced its approval of irradiation for fresh and frozen ground beef. This means food is exposed to ionizing radiation to reduce the risk of pathogenic bacteria like salmonella and E. coli, to minimize sprouting, and to increase shelf life. Three types of radiation are allowed: gamma rays, x-rays and electron beam radiation. Like antibiotics, irradiation is not selective so both good and bad bacteria are killed. This includes the bacteria that produce warning smells in spoiling food, fooling consumers into thinking it is still good to eat.

Irradiated food must be labelled. However, if an irradiated ingredient makes up less than 10 percent of a finished product, it is exempt from labelling. Labels include written statements such as “irradiated” or “treated with radiation” alongside the international Radura symbol.

Irradiation does not guarantee the absence of dangerous micro-organisms or make up for poor food handling practices. Again, those wishing to avoid irradiated foods must scan labels or buy organic. Perhaps that next pesky potato sprout can serve as a reminder that it is natural, if that is what you have opted to buy. I recommend storing organic grains and flours in the fridge to avoid insect growth. Refrigeration of raw nuts and seeds will also delay rancidity.

New ingredient lists are easier to read, with larger black print on a white background. All sugars are lumped into one group, which in many cases will more accurately move them to be the first ingredient in the list.

The Detox Project’s “Glyphosate in Transition” label indicates a detection level under 200 parts per billion. The manufacturer must then reduce the level to “Glyphosate Residue Free” within a two-year period. The products are tested at least three times a year.

All irradiated foods in Canada must show the “Radura” symbol alongside a written statement, unless the irradiated ingredient constitutes 10 percent or less of the final food product.

Nanotechnology is the next frontier in consumer awareness of its use in food. Nanoparticles are extremely small, approximately 1000 times thinner than a human hair. Friends of the Earth describes their size in their report Nanoparticles in Baby Formula:

To put the nanoscale in context: a strand of DNA is 2.5 nm wide, a red blood cell is 7,000 nm wide, and a human hair is around 80,000 nm wide. One nanometer is one billionth of a metre. One way to understand how incredibly tiny these particles are is to consider a tennis ball in comparison with planet Earth. On scale, a tennis ball is the same size in relation to Earth as a nanoparticle is to a tennis ball.

The most commonly used nanoparticle in foods is titanium dioxide. It is used to make foods like yogourt look whiter and to reduce caking in dry goods. Some manufacturers are investigating the replacement of fat molecules with nano water droplets in products like mayonnaise and ice cream.

Friends of the Earth tested six popular American baby formulas to find that all contained nano-sized structures, yet no mention of the technology was listed on the label. The advocacy group cautions that “the same properties exhibited at the nanoscale that make these materials attractive for use in the food industry may also result in greater toxicity for humans and the environment.”

Currently, there are no regulations or labels specific to nanotechnology-based health and food products in Canada. My quest for sunscreen without nanoparticles in the last few years required careful research. Nanomaterials have been a boon to the cosmetics industry. Consumers love highly transparent sunscreens, light-diffracting cosmetics, and moisturizers with enhanced absorbability.

As always, consumers must educate themselves and establish individual preferences for their foods and personal care products. Preparing your own meals and knowing growers are the best ways of assuring what is in your food. Government regulation and labelling can never tell the full story despite recent improvements to food labelling. We hope this helps during your next grocery shop.

Geneviève Eliany is a criminal lawyer specialized in natural health product, food, and professional regulation. She previously studied and practiced homeopathy for over 10 years. You can find her online at elianylaw.ca.

Geneviève Eliany is a criminal lawyer specialized in natural health product, food, and professional regulation. She previously studied and practiced homeopathy for over 10 years. You can find her online at elianylaw.ca.