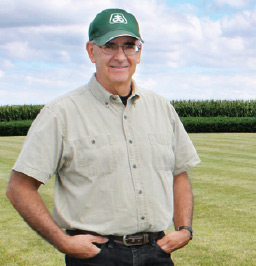 FOR 20 YEARS, Dean Glenney has been planting his corn and soybean crops in exactly the same spots. Using a reconfigured five-row planter with narrow tires that line up precisely between well-established rows, he plants seeds right into the roots of last season’s crops. Instead of turning the soil, he lets worms bring dead leaves and other detritus down into their holes and act as a slow-release fertilizer.

FOR 20 YEARS, Dean Glenney has been planting his corn and soybean crops in exactly the same spots. Using a reconfigured five-row planter with narrow tires that line up precisely between well-established rows, he plants seeds right into the roots of last season’s crops. Instead of turning the soil, he lets worms bring dead leaves and other detritus down into their holes and act as a slow-release fertilizer.

“The secret is to get out of their way,” says Glenney, letting them turn nutrients from that organic matter into biomass, then storing and discharging it.

Glenney’s method, fencerow farming, produces nearly twice the yield of neighbouring farms in Dunnville, Ontario. His first row of soybeans is planted directly into his lawn and more than 200 acres of soy and cornfields stretch out beyond it. He lets his entire field emulate the uncultivated soil on each side of the fence (hence the name fencerow), without the interference of plows. Glenney’s interest in no-till farming was piqued at age 14, and he’s encouraged farmers all over North America to do the same, yet “in our area, it seems like everybody is going back to the plow,” says the 63-year-old. “My theory is they have to plow because they plow.”

Not everyone is neglecting Glenney’s advice. A&L Biologicals, an agro-ecology research lab focused on plant productivity and reducing cost and ecological impact, formed a team to study why fencerow farming is so successful. A&L used Glenney’s 2012 growing season to produce a report on the physical factors that allowed for root health and sustainable corn and soy production. “It’s relatively remarkable,” says George Lazarovits, research director at A&L. “Breeders’ expectations by the year 2050 is that they will be able to increase the yield of corn to 300 bushels per acre. We’re going to spend a couple million or more doing this. Along comes Dean Glenney with the current varieties, and he grows 300 bushels. Why do we have to wait another 35 years when we can do it today?”

TO UNDERSTAND THE MICROBIOLOGY at work in Glenney’s crops, Lazarovits’ team compared samples from four test plots (with 20 plants per plot) on Glenney’s farm and four on a neighbouring farm. “The microbiology within the plants at the two locations was vastly different,” explains Lazarovits. “It was day-and-night different, even though we were growing the same plants.”

Conventional wisdom suggests that Glenney’s undisrupted soil would have a much more diverse variety of organisms. The test plots proved that stem juice from the neighbouring farm’s corn had a significantly higher diversity of bacteria, whereas Glenney’s corn had much few bacteria types – but 100 times the amount of bacteria. “He doesn’t disrupt the soils, so you get microorganisms that specialize in the soil,” says Lazarovits. He calls it a “probiotic approach to agriculture.”

A&L’s study is now trying to identify the specific plant-promoting functions of the microorganisms within Glenney’s crops, as well as applying for more funding to try and find similar correlations between high and low yields on other Ontario farms. “In the long run, it doesn’t matter [what bacteria] is there, it matters what they’re doing,” says Lazarovits. “Function is what, ultimately, the growers will want.”

On a breezy day in August 2013, Glenney welcomed a few dozen Québécois farmers to his land to learn his approach. Before the group arrived, he told me to look at the walkway to his back door. Clusters of wildflowers filled the cracks and spaces between rock slabs. “We don’t have to do anything to the ground,” explained Glenney. “The plants, the bacteria and the soil will.”

While Glenney may champion simplicity, his audience complicates things. Rows of chairs faced a projection screen in Glenney’s barn, and a truck was parked beside it serving up coffee and donuts courtesy of DuPont Pioneer, North America’s largest hybrid seed producer. As the farmers filed off a bus, it became clear that Pioneer had coordinated the presentation for this group of loyal genetically modified (GM) seed customers.

Glenney noted in his lecture that he “starts with good seeds.” He’s experimented with other varieties but has planted primarily Pioneer seeds for about 30 years. Formerly Hi-Bred Corn Company, Pioneer has been testing and modifying corn and soy varieties since 1926. Glenney plants non-GM soybeans, but says cost and demand keep him planting GM corn. Non-GM soybeans are sold at a premium, particularly in Asia and Europe, because more and more North American farmers grow modified varieties. There is no such current demand for non-GM corn, although the vast majority grown in North America is GM.

Lazarovits discovered Glenney’s method and realized it might be worth deeper consideration after the farmer entered and won the Pioneer-sponsored Ontario Corn Yield Challenge in 2010. The two men met during a post-contest conference in Montreal. Together they applied for research funding from the Grain Farmers of Ontario, who in turn applied to the federal government under the Canadian Agricultural Adaptation Program.

A&L’s study of Glenney’s farm is one of seven projects being funded by the federal government through the Grain Farmers of Ontario. The feds have invested more than $850,000 on these projects to study pest and high-yield crop management. Going into the second harvest of Glenney’s crops, Lazarovits says their initial research has developed and adapted methods for separating plant and soil organisms to determine those that promote a high yield. “You have a ruler to measure the height and width of the plants,” says Lazarovits. “There’s no ruler to measure microbiology. Measuring that component and developing the tools, those are not trivial things.”

The research team has isolated organisms that are unique to Glenney’s land, and they now hope to begin measuring their different functions – key information in the race for the highest yield. Organic farmers have long been interested in microbiology, but Lazarovits says it has only recently become an area of focus for industry. “Pioneer is coming to meet with me,” he says, adding that they want to know why their seed varieties get different yields at different locations. Lazarovits also points to the strategic alliance between Monsanto and Novazymes, announced in December, as just one indicator of large industry players investing heavily in microbiology.

Finding a way to bottle the success of Glenney’s formula could reap huge profits for a company such as Pioneer or Monsanto. Certainly there are concerns about the potential impact of higher yielding GM seeds. Lazarovits argues that the GM component of the seeds has no bearing on the microbes inside the plants. “The changes that are associated with the plants themselves, those are for resistance to herbicide – a protein that breaks down that chemical,” he says. “It’s not going to alter the fungi or bacteria.”

Locavore News editor Elbert van Donkersgoed highlights one potential environmental problem with fencerow farming and GM seeds. “In order for it to work, my concern is that the corn produces a lot of Bt,” says van Donkersgoed, referring to the natural pesticide Bacillus thuringiensis. Bt is used to control corn borers, but its impact on other organisms requires more research and its potential for overuse could create another resistant pest.

Regardless of seed variety, van Donkersgoed says there is valuable information coming out of Glenney’s farm. “I think that there’s learning here for every type of farmer, even for organic farmers,” he says. “And there’s learning here for those who are into conventional farming. They can significantly improve their sustainability by understanding what Glenney has accomplished.” 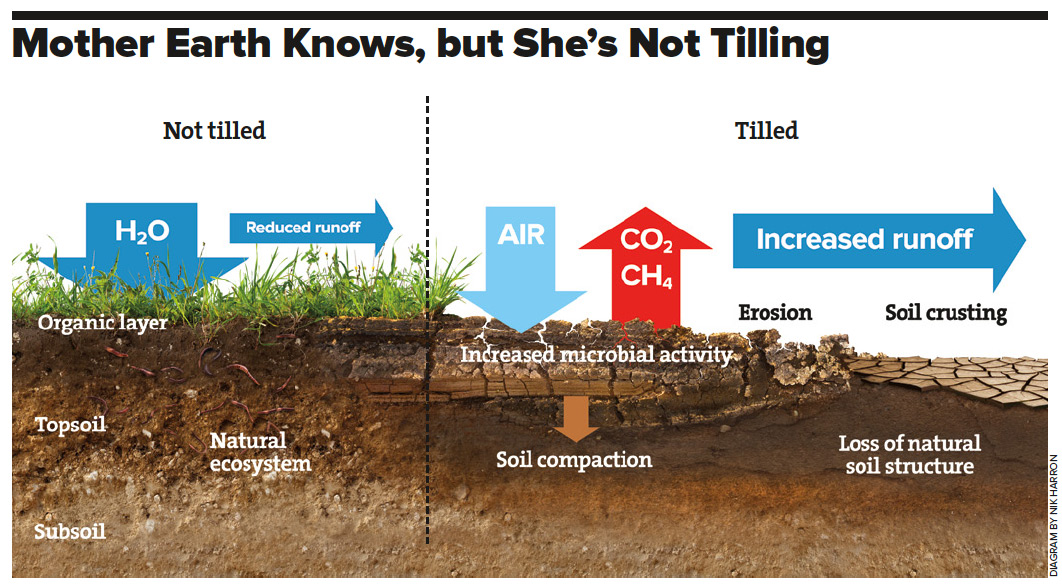 TILLED FIELDS undergo many significant changes to the soil structure, nutrient cycling and erosion rates. The soil can become compacted, requiring more tilling to “fluff” it back up. Increased air spaces within the soil can lead to accelerated microbial activity and a quicker release of carbon as a greenhouse gas. In fields that have been flooded, drying mud can form a crust on the surface that can interfere with seedling emergence. Without cover, the bare soil is succeptible to water and wind erosion, leading to problems with agricultural runoff and loss of fertility.

Pioneer and other private companies will be paying close attention to how the community of microorganisms in Glenney’s soil can be applied to the seed itself, taking advantage of the benefits without years of cultivation. “There’s an opportunity here both for science, and for those who could duplicate in the lab what Mr. Glenney has done on his farm,” says van Donkersgoed. “It’s something that Pioneer would have deep enough pockets to find out if it’s possible. I would prefer if there was enough public money available to pay for that research, and that the results would end up in the public domain.”

The first stages of research are publicly funded, and Lazarovits says it is widely beneficial. If, for example, the average corn production is 150 bushels per acre, selling at a cost of $6 per bushel and a growing at a cost of $500 – the farmer is making a profit of $400 per acre. Lazarovits says on Glenney’s farm, by getting 300 bushels per acre at the same operating cost, he is taking in $1,300 with the same conditions. “You’re looking at a 300-per-cent increase in profit or more. That’s sustainable agriculture,” says Lazarovits. “You want farmers to make money and we want this extra yield if we’re going to have eight billion people on the planet.”

While a higher yield is of interest to both GM and non-GM farmers, large players with deep pockets certainly stack the deck to one side. Whether or not scientific research leads to a short-order method of replicating Glenney’s success with GM or organic crops, van Donkersgoed says farmers of every stripe should be paying attention. “He has created a unique soil community on his farm, on his rows of crop,” he says. “That I think is a very significant finding and that is something I think is significant to anyone growing sustainable agriculture.

A&L Laboratories’ report on Glenney’s crops is available at alcanada.com in the “Research” section.

Elaine Anselmi is a displaced Torontonian working as a reporter in northeastern BC.