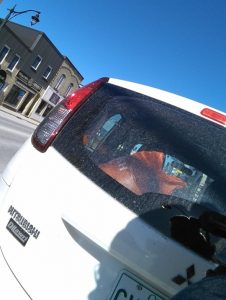 It was early March, just before Covid-19 exploded into our collective consciousness. We – my partner and I – decided on a quick weekend getaway to celebrate an anniversary. We live in Kitchener and had wanted to visit the Lake Huron shore. We found a resort just north of Grand Bend and made our plans to escape. And when I say ‘plans’, I do mean so, given that we drive an electric vehicle, and one that happens to be best suited to inter-urban transit.

Don’t get me wrong; I love driving ‘Mr. Bobby Button’, the moniker (and character) attached to the 2017 Mitsubishi MiEV that can be seen tooting around KW in all seasons. BB is about the size of a Smartcar-on-steroids, has all-wheel drive and can turn in a phone booth, and is remarkably spunky when the light goes green. This generation of EV, however, was built just-before the innovations embedded in today’s EVs that practically eliminate ‘range anxiety’. BB has an ‘effective’ full range of 150 kilometres on a full charge but temperature, ancillary electrical use (radio, phone charger, heater, etc.) and travelling speed can combine to reduce the 150 km range by a third or more. That’s not much of a problem when you are doing errands or running across town and back; you plug in at home and are fully good-to-go by the morning. But when you’ve got an extended journey ahead of you in an EV of BB’s vintage, you need to put a bit of extra planning in place to ensure that you arrive at your destination without the necessity of pushing the last kilometre or two!

And, truth be told, I’m a bit of a nervous-Nelly when it comes to range anxiety. When driving gas vehicles, the EMPTY light was a frequent travelling companion and a reminder to stop….soon-ish. In BB? Not so much. There have been a couple of ‘adventures’ that came close to running down the battery and getting the travelling party stuck in the middle of a farmer’s field. Oh, and there’s that other time that saw yours-truly come close to committing B&E to access an electrical outlet in a barn by the side of a country road somewhere west of Belleville.

With that in mind, the route was carefully planned, thanks to the ‘Queen of Google Maps and the EV Charging Apps’. Oh yes, there’s an app for charging your EV (recommended), or for scouting out potential stopping points (also recommend, and be sure to check the latest check-in). Actually, there’s three or four apps that you need in this part of SW Ontario. In Quebec and eastern Ontario, one app gets you from Montreal to Kingston….but then you’ll encounter a patchwork of stopping points, some demonstration projects brought forth by municipalities and some for-profit, app-based solutions. In southwest Ontario, there’s pretty good coverage in the cities like Kitchener-Waterloo, London, Stratford, Guelph and Brantford. For our trip to Lake Huron, we’d first need to stop and top-up in Stratford. And then find another place to stop before getting to the shore, as the top-up only takes BB to 80% charge and the temperature was cool to the point of chilly (and passengers likewise).

We made the first leg to Stratford without incident, although that luck wouldn’t be repeated on the homeward journey as the erstwhile-working charging suddenly wasn’t working on Sunday! But that’s a story for another day.

The battery in BB read 40% when we plugged in to the fast-charger, ChaDeMo (google it….I can’t remember what that stands for at the moment). It takes about 20 minutes to get to 80% from empty, although I’ve never risked that; in this case, the charge took about 15 minutes, which afforded us the perfect opportunity to advance scout the next stopping point.

As I mentioned, the Queen had a full array of apps to check and then cross-check with Google maps to plot time, distance and likelihood that I’d have a mini-meltdown before we reached the charging point. At this stage, I was focussed not so much on the bucolic nature of the quaint town housing the charging station – and much more focussed on not running out of ‘juice’ somewhere between Varna and Staffa….which last time I check an atlas were both located near the Black Sea? How could that be?

I should mention that in addition to the high-powered, separately-powered ChaDeMo fast-charger (15-20 minutes), there’s a mid-range charger (that runs on 220) that takes 4 hours to reach full charge from empty…and a plug-in, take-with version that can take up to 12 hours to get you to full charge from empty. Oh, and because we don’t drive a Tesla, Elon’s e-stations do absolutely nothing for us ‘plebs’. So figuring out which station was working in which location, and with which app to pay for the privilege of powering our progress, is kind of important.

The Queen remarked that there seemed to be a new station, just up and running in the town of Exeter, which was conveniently located on our route to the shore from Stratford. With an almost-full charge under our engine’s fanless belt, we headed out with a load of enthusiasm and just a tad of concern about what would await us at the destination. We checked out the Google maps, saw that Exeter is located about 20 kilometres from the Lake Huron shore near Grand Bend, with an extra dozen clicks taking you up the shore to Bayfield. Exeter is also the largest and best-appointed town once you’ve left Stratford if you’re heading in the Grand Bend/Bayfield direction. The perfect waypoint, as it turned out.

And talk about serendipity! I was almost out of coffee and the charging station was located in the parking lot of the Timmie’s on the main street (actually, Main Street)!

The station was easy to find (which is NOT ALWAYS the case), the app connected easily (again, NOT ALWAYS the case), and we both let out a bit of an exhale knowing that we’d leaped the final range hurdle, with an 80% charge more than capable of speeding us the 20+ kilometres to our final destination, where we’d plug-in the overnight charger. I ducked inside, grabbed another double-double, and sat back, enjoying the respite while the vehicle charged. The Queen, not content with EV apps and Google maps, turned her attention to another favourite, real estate dreaming.

Firing up the MLS, we noticed a couple of properties for sale and for lease in Exeter, and specifically a couple of properties in the historic downtown core. Now, there was no impetus to look at properties but why not follow the way that the road was taking us, and Exeter was leaving us happier and recharged by the minute. Once we reached the max, we headed down to the core and spied out the listings. One or two looked promising – again, not sure promising what – so in the days after we reached out to the agents to explore what-ifs. And then the pandemic hit HARD, lockdown came, and more pressing realities pressed the idea away…..for a while.

In early September, to recharge from a strenuous summer spent developing two print issues and delivering a wealth of online content, we decided to head back to the shore for a Covid-safe weekend, this time staying in Bayfield. It was a lovely time, and on the road back home we decided to stop in Exeter to recharge the vehicle. There’s also a lovely park in Exeter, and we’d recently added a puppy, Zoey, to the family. Zoey needed a good stretch-of-the-legs in some deep, green grass and lungs full of fresh, clean air. So Exeter it was (we could have made the full trip to Stratford with the full charge and the warmer temperatures). The fact that we could stop at Timmies and recharge the vehicle (and the driver) only added to the appeal. We also took the time to drive to the downtown core and see how the local merchants and businesses were doing. We were happy to note that most businesses had managed to sustain operations in spite of the historic challenges, and that people were (safely) going about their daily activities, a smile in their eyes as they greeted us from behind the masks.

When we returned to Kitchener, we made a few enquiries in regard to real estate in Exeter. Well, as things would happen, an interesting proposition was brought to us by a friend of A\J: there was a street level shop in a building in the middle of the historic downtown core, and the rent would be ‘subsidized’ by the philanthropically-inclined new owners for a year (at least). But we’d need to be ready to put staff in that office once the pandemic lifted – and be ready to use this gift as an opportunity to learn, listen and grow more earthy in our opinions and in our writing. We’re there now.

We’ve got plans again, tentative plans given the uncertain circumstances. But the plans are rooted in the core mission of our organization: to become the most effective story-teller of environmental stories that are read by a broad cross-section of Canadians. We’ve got roots in cities and bigger towns, graduating from Peterborough to KW, with stops in Toronto in between. We’ve got roots in academic circles of informed-opinions and opinion-formers. We’ve got roots in the eNGO community, and frequently seek to empower collaborations that deliver 1+1=3. But, as an organization, our roots had not yet extended to the fertile soil of a community like Exeter. So, we leaped…. again….and we’re ready to take bigger leaps in the near future.

We’ve already made some friends in the community, and have discussed how we can best become a good neighbour and an economic development supporter. We’re ideating lectures and panels and musical events. We’re engaging with schools and businesses and organizations to understand their environmental stories – and to share them with our national readership. Admittedly, we’re doing it slowly; slowly but surely. We’re planting the seeds that we hope will grow into strong roots that will allow our writing, our story-telling, to blossom and flourish.

In Exeter, Ontario, at the crossroad to Lake Huron shore, on the road to serendipity… and opportunity.