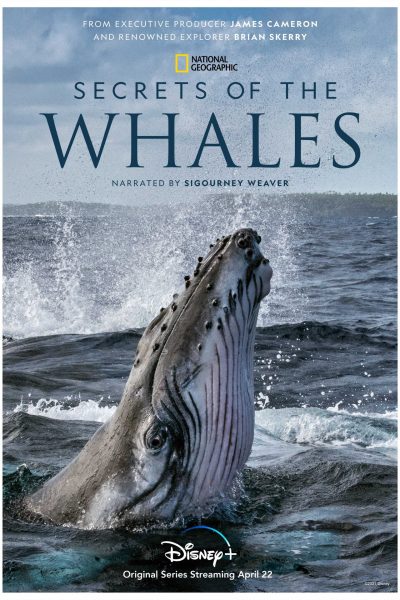 A Nod to Magnificent Creatures

Secrets of the Whales

Have you ever wondered what whales get up to on their day-to-day schedules? Well, now you can find out. Marking Earth Day 2021, “Secrets of the Whales,” from National Geographic is an educational, visually stimulating documentary series that plunges us deep into whale culture. We learn about the extraordinary communication skills and social structures of five different whale species: orcas, humpbacks, belugas, narwhals and sperm whales. The four parts of this series—executive produced by James Cameron and narrated by Sigourney Weaver —are titled “Orca Dynasty,” “Humpback Song,” “Beluga Kingdom” and “Ocean Giants (Sperm Whales)”.

Filmed over three years in 24 locations, such as New Zealand, Sri Lanka, and Antarctica, this 4-part docu-series teaches us that whales are far more complex and more like us than we could have ever imagined. “Whales are just like us”, says Weaver in the opening lines of the series. Through Brian Skerry’s incredible photojournalism, we get to experience intimate photography and clips of these amazing animals in their natural habitats: whirling around in their pods, hunting, playing, racing, and eating. Basically, we get to experience a day-in-the-life of these creatures, and they’re pretty similar to us after all. If you’re into cinematography and oceanography, James Cameron appears towards the end of each episode to give an insight into the footage and how it was shot.

If you’ve seen Blackfish, you know what the introduction of this episode focuses on. The unfortunate SeaWorld mascot, which has never been known to attack a human in its natural environment. Part 1 follows a pod of orcas through the waters of Antarctica and another family of orcas as they root out stingrays in New Zealand. It’s interesting to see how these creatures can navigate through such different climates, in vastly different parts of the world.

Part 2 follows the journey of humpbacks as they embark on the longest migration of any mammal on Earth and communicate through intricate sounds and “songs”.

In Part 3, we’re off to Greenland (possibly my favourite episode). Here, we meet and learn about beluga whales and the narwhal, which I will forever associate with a cross between a whale and unicorn. In this episode, the belugas adopt a narwhal to save its life, reminding us that whales are complex creatures and understand more than we originally thought they did.

Have you ever read Moby Dick? This episode reminds us that the monstrous portrayal of a sperm whale by Herman Melville was just fiction. This episode teaches us that sperm whales, although weighing over 50 tonnes, are just gentle giants. The females pass information on through generations and they have intricate family connections.

The series is a must watch. It’s one thing to know that these creatures exist, but to be let in on the inner workings of their lives, and to understand their thinking patterns and the emotions they are feeling, is something else entirely. This series encourages us to develop a connection with the largest mammal on Earth. The heart-wrenching scenes of whales caught in fishing nets or a mother whale losing her calf are all part of the immersive experience, which shows us just how miraculous life on our planet really is.

Teo Guzu is a Master’s in Environment and Sustainability student with a focus on policy and research. Her background is in the field of Sociology and Global Development Studies where she developed an interest in how climate change disproportionately affects different communities. Her interests lie in plastics and waste management, conservation, and clean technology. In her free time, she enjoys spending time with her family/friends and her dog Charlie, reading, writing, and watching docu-series on various topics.