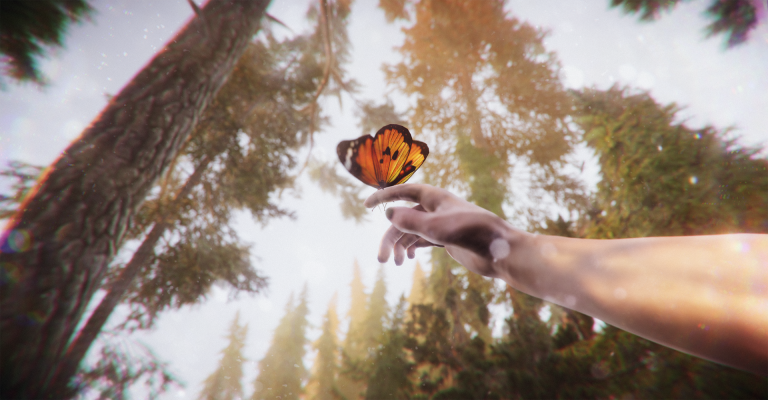 Most of us started learning about environmental history in a classroom, through a mandated curriculum. We might get snippets in the news, or hear the names of scientists used in conversations to back up a point. But what if we could step into those stories to see what makes them so significant to our present? What if we could experience them for ourselves?

Created by solo developer Brian Wilson, The Forest Cathedral is a new game based on Rachel Carson’s 1962 book, Silent Spring. Players uncover the effects of DDT by solving 2D and 3D connected puzzles and explore the quieting world that Carson cautioned against. “She was trying to get the word out that no one knew what those pesticides were going to do ‘in the future’”, says Wilson, on his inspiration to use a scientific text as the basis for a video game, “and we’re now experiencing that future”.

Wilson is based in Pittsburgh, Pennsylvania, close to where Rachel Carson grew up and where she has a lasting legacy for her contributions to our understanding of chemical use in nature. “She was able to spread the word through writing and books, but being a woman of science in the 1960’s, the resistance from men in her field and these chemical companies, and the public backlash, as well as the fact that she was battling breast cancer; there is so much more there than just what is written in the book.” Her words are studied in classrooms and referenced now in modern discourse about sustainability and biodiversity loss, but the conditions in which she sought to share her views are sometimes overlooked.

“It’s scary because it’s real,” says Wilson, “and that’s because even today there are certain states where robins are dropping out of the sky randomly and you can’t eat the fish in one of the local lakes where I grew up, because of what happened 60 years ago.”

The Forest Cathedral doesn’t attempt to recreate the material of the book, but rather imagine what Carson experienced that prompted her to write it in the first place. It follows the creation of DDT and the field observations that led to Carson’s conclusion that manufactured pesticides might have severe impacts on living systems if used recklessly. The player is guided by a voice; the Rachel-as-narrator not only provides gameplay direction, but also her thoughts and insights about what these discoveries might mean.

Landscape plays a role in The Forest Cathedral, as players navigate through an ecosystem in order to complete their objectives. “We’re seeing it in virtual reality games or with technology such as photogrammetry, which scans and captures spatial data to preserve it; getting to live in another world, to be able to touch and move around and look at things.” Wilson is optimistic that as video game tools improve, developers will only get better at distributing and making virtual worlds feel more real.

Biodiversity is at the core of the narrative but is also incorporated into the game design itself. Levels are centered around trophic spheres; first, you’ll investigate and observe mosquitos, then move on to trout, and so on, climbing up the food chain. But, just as in the natural world, with each level comes a higher concentration of DDT – something that Rachel and the player can’t miss. Integrating ecological concepts into the game’s foundation is a way to teach the player about bioaccumulation without blatant, textbook exposition; by showing rather than telling.

Other video games have referenced biodiversity loss in their design too. In the first Red Dead Redemption game, there are a limited number of American bison that the player can hunt. All other animal resources will respawn eventually, but the player can, inadvertently or not, contribute to endangering a native species. The recent indie game, Mutazione, uses traditional medicine as a major theme of both the story and gameplay; the player must learn about the declining local species and their properties in order to best grow them. Niche, a turn-based strategy game, is based on concepts from population genetics and presents challenges such as predators, illness, and climate change as examples that shape evolutionary pathways.

Wilson is optimistic about the role video games can play in stories about environmental communication. “I think video games have been around long enough now that it’s not strange to have access to them in our pockets or on an iPad. It’s a tool that can be educational while also fun. Especially having a younger audience learning different stories – maybe not from a traditional textbook – that can be more engaging.” This potential to offer a story that a particular audience might not otherwise hear is exactly what Carson was aiming at with Silent Spring. Wilson further explains: “She knew that there was a story that needed to be told, and through her ability to write and release books, she knew she could reach a broader audience – like everyday people – and could translate scientific information into something that could be understood by any person.”

Video games also put the player in control; their actions are central to the progression of the story. “Games can and should take advantage of the thing they do best, which is their interactivity. It’s something that films or books can’t do; allowing people to explore climate change or deforestation or biodiversity loss actively, by doing and playing, instead of being a passive watcher,” Wilson states. It’s through this participatory learning that players could walk away from a game feeling positive about the change they can make in the world. “I think that one of the best ways to learn is by playing, so if we’re allowing people to experience things, such as through scientific tasks, you’re actually doing it and not just reading about an experiment – you’re doing the experiment! I think people will have such a better takeaway from that.”

What does Wilson hope players will take away from the game? Inspiring them to pay attention to the world around them. “It’s an important historical scientific moment, in a playable form,” and if enough people are excited to play through this history, it could encourage more game developers to get inspired by environmental issues and use their work to elevate these conversations.

“This is going to be a brand-new story for so many people”, Wilson says, “but it’s an important story to share.”

Kelly Hornung is a narrative designer for video games working in Montreal, QC. She has a Hon. Bachelor of Environmental Studies from the University of Waterloo, and with a unique background in ecology and playwriting, seeks to share awareness of environmental issues through immersive media and storytelling.