Another construction site along Enbridge’s Line 9 pipeline has been occupied this morning – at least the third in three weeks – and this time protestors are planning to stay.

Another construction site along Enbridge’s Line 9 pipeline has been occupied this morning – at least the third in three weeks – and this time protestors are planning to stay.

Two blockades of “integrity digs” last month were short-term interruptions intended to draw public attention to the pipeline, the threats Line 9 poses to Southern Ontario’s land and water systems, Enbridge’s history and poor handling of spills and a lack of effective consultation with First Nations.

Enbridge recently received approval from the National Energy Board to reverse the flow of the pipeline and pump tar sands bitumen through it, from Sarnia, ON to Montreal. It will also carry fracked Bakken shale oil.

Today, work has been stopped on a valve installation near the Thames River in Innerkip, Ontario, in Anishinabek territory. The Thames watershed supplies drinking water to over a million Ontarians and is home to rare species including the eastern spiny softshell turtle and Virginia Opossum. Those occupying the site argue that “Line 9 poses a danger to people, animals, land, and water,” and that the valve will provide no added protection against a bitumen leak, given that it is located after the pipeline crosses the river.

The official processes have merely rubber-stamped dangerous tar sands projects and failed to protect us, so we are here out of necessity.

“This construction project is a band-aid attempt and Line 9 is too old and damaged to operate safely,” said activist Sarah Scanlon. “The new valves aren’t designed to protect rivers, they’re designed to maximise the amount of bitumen that can flow through the line.”

Calling themselves “Dam Line 9,” the group explains that they have tried raising concerns through other channels, including the National Energy Board and local and regional governments, but “the concerns expressed by individual people and municipalities were ignored. The official processes have merely rubber-stamped dangerous tar sands projects and failed to protect us, so we are here out of necessity,” says Rachel Avery, a blockader at the site. The group intends to stay on site “indefinitely,” despite threats by Enbridge to have them evicted at 6:00 tonight.

The occupation site is located on Oxford County Rd 5 (17th Line) in Innerkip, Ontario (near Woodstock), between Township Rd 10 and Township Rd 9 (Braemar Side Road) and blockaders are inviting people to join them or donate supplies. 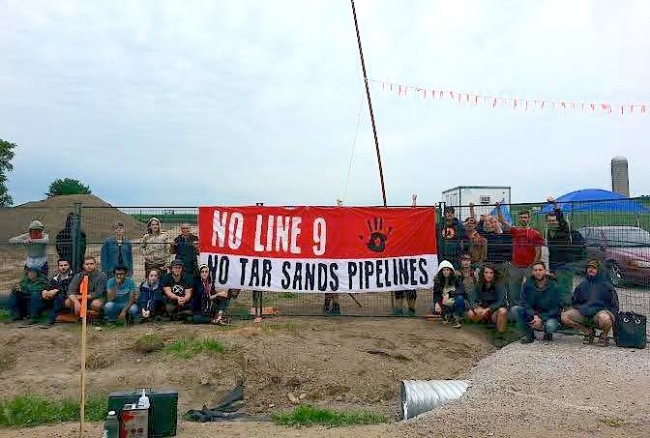