Medicine Hat, Alberta, is branching out. The city has approved a proposal to install the country’s first concentrated solar power (CSP) project.

CSP typically employs an array of mirrors to reflect sunlight onto a single point, often at the top of a central tower. The concentrated light quickly becomes heat, which in turn is converted into electricity by way of an electric power generator.

Medicine Hat, Alberta, is branching out. The city has approved a proposal to install the country’s first concentrated solar power (CSP) project.

CSP typically employs an array of mirrors to reflect sunlight onto a single point, often at the top of a central tower. The concentrated light quickly becomes heat, which in turn is converted into electricity by way of an electric power generator.

The technology sounds promising. Some research indicates that filling even five per cent of the world’s deserts with CSP could match the world’s entire current energy needs. That’s still a lot of space and the electricity would need to be transported over great distances, but there’s no denying that it’s an impressive statistic.

Canada is a little short on deserts, but we do have the prairies. So is Medicine Hat on to something big? Maybe, but not necessarily. There are three not-insubstantial hurdles that they need to clear first:

Solar energy production works best in direct sunlight, i.e. with no cloud cover, but even in the blazing heat of a summer day in Regina, the sun will only hold so much potential. High latitudes receive more diffuse sunlight than do equatorial regions. Though the potential shifts slightly according to the time of year, northern countries are generally less fertile grounds for solar production. A Natural Resources Canada map shows the prairies to be as good a spot as any within Canada for a CSP project, but maps of worldwide solar resources contextualize our country at the lower end of global potential. 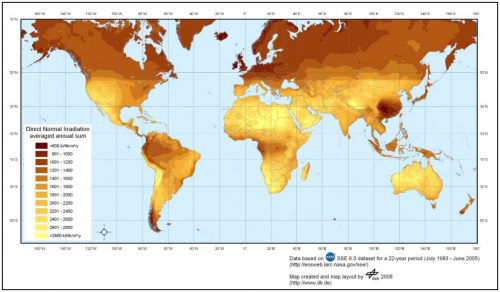 The German Aerospace Center has already concluded that, “most world regions except Canada, Japan, Russia and South Korea have significant potential areas for CSP at an annual solar irradiance higher than 2000 kWh/m²/y.” None of this means that CSP can’t work in Canada, but it does mean that results from other countries are probably not strong indicators of Medicine Hat’s maximum potential.

2. Risk of an Unproven Technology

Concentrated solar power projects are excluded from consideration under Ontario’s Feed-In Tariff (FIT) program, due to the unproven nature of the technology in the Canadian climate. Is there anything to lose in supporting CSP? Yes, insofar as a technology with no support will lower economies of scale and make regular maintenance a difficult prospect, while a technology on the rise would result in lowered costs. Some in the energy industry are already pronouncing the death of CSP. Jigar Shah of Inerjys Ventures, for example, has left the bandwagon: “I think in 2012, CSP basically died. […] I don’t think anyone believes that they’re going to get a second contract. CSP is dead.”

The prairies are not quite empty. Fertile farmland stretches in nearly endless fields from Alberta across Manitoba, punctuated by occasional rivers and lakes. Securing available farmland is one issue, but CSP is also competing for limited geographical and financial resources with other technologies, including photovoltaic solar power.

I’m not necessarily all that pessimistic about the prospects for this interesting form of renewable energy, but I raise these concerns in order to lend context to a bigger question worthy of our consideration: Is it better to concentrate our alternative energy efforts on a small handful of technologies or would we do better to diversify our renewable portfolio? One might think that there is no downside to employing as many technologies as possible, but I hope I’ve shown that introducing new technologies may come with a few problems and some measure of financial risk. It’s something to consider as we decide on the shape our renewable future should take.