Have you ever noticed this twittering sound? I didn’t until a friend pointed it out a few years ago. I was amazed to learn it comes from tiny birds that spend their nights clinging to the walls of chimneys and their days aloft on long, sickle-shaped wings. I’ve heard it countless times in the summers since then. A couple of weeks ago, I rejoiced to hear those twitters for the first time this year and see a handful of newly-returned chimney swifts flit across the sky.

Have you ever noticed this twittering sound? I didn’t until a friend pointed it out a few years ago. I was amazed to learn it comes from tiny birds that spend their nights clinging to the walls of chimneys and their days aloft on long, sickle-shaped wings. I’ve heard it countless times in the summers since then. A couple of weeks ago, I rejoiced to hear those twitters for the first time this year and see a handful of newly-returned chimney swifts flit across the sky. 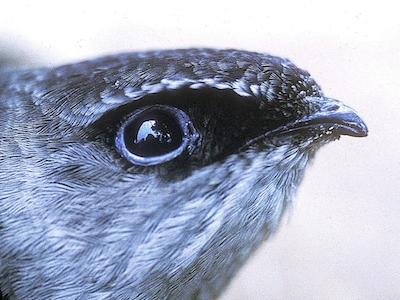 Since chimney swifts can’t perch (their feet are too small) and only sit still when inside their roosts, it’s hard to get a good look at one. The only time I’ve seen them up close was when three nestlings were brought to a wild bird hospital where I worked. They were the strangest-looking birds I had ever seen: soot-coloured and scruffy, just what you’d expect from something that lives in a chimney. Their mouths seemed impossibly wide. In the wild, these gaping maws serve as butterfly nets for catching insect prey as the swifts sweep through the air.

Sadly, populations of birds that dine primarily on insects, including chimney swifts, are declining sharply in North America. The chimney swift population is currently less than a quarter of the size it was forty years ago. So far, scientists have not been able to pinpoint why so many insectivores are in trouble.

For chimney swifts, habitat loss might be a factor. The open-topped chimneys and dead, hollow trees they need for roosting and nesting are becoming less common.

I was glad to discover researchers are monitoring chimney swift populations and trying to find out more about them. One exciting program is Bird Studies Canada‘s SwiftWatch. SwiftWatch unites biologists and community volunteers to find, describe and protect roosting and nesting sites in Ontario and the Maritimes.

This year, Ontario SwiftWatch biologist Carolyn Zanchetta is putting data loggers in chimneys to study temperature and light intensity. “We are looking to see if there are any temperature differences between the chimneys that the swifts choose for nesting compared to those chimneys that are open and available but they do not use,” she explains. “It seems that this habitat is available to them, and we’d like to know why it goes unused. We are hoping that this information can be used to inform why artificial towers have not yet been successful in Canada, whereas they have done very well in the United States.”

I was curious to find out how the loggers are installed, so Carolyn described the process:

“We fashion a bracket using a metal clothes hanger that hooks over the edge of the chimney, and the logger hangs down by fishing line at approximately the level where the chimney meets the roof line. Before it is lowered into the chimney, the logger is activated to begin recording using a strong magnet as the trigger. The biggest challenge with installing data loggers has been finding roofs with safe access where our staff feel comfortable enough to get to the top!”

Even once staff are up there, things don’t always go smoothly. “In one very memorable yet unfortunate experience, I managed to drop one of the loggers down a chimney,” confessed Carolyn. “The building’s superintendent and I emptied out the clean-out in the basement to no avail, but it has certainly made me more aware of holding onto the loggers!”

The loggers have been installed in eight chimneys situated on apartment buildings, commercial facilities and a high school. Next year, the study will be expanded to include more chimneys.

And what do landowners think about scientists scaling their walls? According to Carolyn, “Many have been confused about why we would want to climb onto the roof and peer in the chimney, but everyone we have worked with has been incredibly helpful. Many of these landowners will now be keeping an eye out for swifts this summer.”

Here in Kitchener-Waterloo, I plan to be keeping an eye (and an ear) out as well. Carolyn encourages us all to report chimney swift sightings on ebird and to contact SwiftWatch if we see swifts entering a chimney. I especially hope to see a group of swifts diving into a chimney at dusk, which I hear is quite a spectacle!

Carolyn also suggests that landowners avoid sweeping chimneys between May and September. If you have swifts in your chimney, SwiftWatch can provide you with information on how to be a good host. You can find out more about SwiftWatch at birdscanada.org and facebook.com/OntarioSwift and get involved by emailing volunteer@birdscanada.org.