This is a response to “Mourning the Slow Death of Nuclear Power“ in Stu Campana’s Renewable Energy blog.

This is a response to “Mourning the Slow Death of Nuclear Power“ in Stu Campana’s Renewable Energy blog.

A recent A\J blog post suggested that nuclear energy is facing a steady decline after the events of Fukushima and the Chernobyl tragedy. In the short term this appears to be the case, but the need for clean, greenhouse-gas free energy is enabling nuclear to make a comeback of sorts. Nuclear has not experienced the renaissance some experts predicted, but new plants are being built both in Canada and abroad. In the long term nuclear energy is expected to remain constant.

In 2012 the Nuclear Regulatory Commission in the US approved the first new nuclear project since 1979. The Obama administration has provided loan guarantees to provide an incentive, and now five new reactors will be entering service across America by 2020. Analysts had previously expected much higher approval rates but the economic recovery, new natural gas production, and high costs have hindered development. Still, the US remains the world’s largest producer of nuclear power and new development is good news for the global nuclear industry.

Closer to home, Ontario Power Generation has completed its environmental assessment for new reactor units at Darlington, scheduled to come online around 2020. These will be the first built since 1993. In 2012 Units 1 and 2 at Bruce A were brought back online after an extensive refurbishment. Bruce is now the world’s largest nuclear generating station creating 25% of Ontario’s energy. Ontario’s Long Term Energy Plan states that “the government is committed to continuing to use nuclear for about 50 per cent of Ontario’s energy supply.” While the Pickering A and B stations are scheduled to close by 2020, new construction and eventual refurbishment of reactors at Bruce and Darlington will ensure nuclear remains part of the energy mix for the long term. 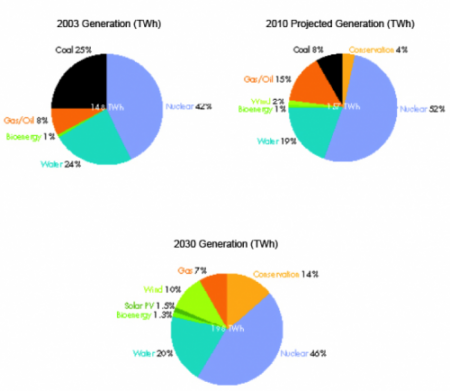 Elsewhere in Canada, Quebec’s Gentilly station was taken offline in 2012. New build applications for Nanticoke, Ontario, Alberta, and Saskatchewan were recently withdrawn; however, these proposals could be resurrected if the situation changes. Ontario has been and will remain the hotbed for nuclear energy in Canada, and net output will remain relatively unchanged.

This strategy seems to be the worldwide trend. The International Energy Agency’s (IEA) 2012 World Energy Outlook predicts that by 2035 nuclear will account for 12% of world energy supply, about 1% less than present. Nuclear generation is being phased out in Germany and elsewhere, but is expected to increase in Russia, Japan, China, India, and South Korea. Japan’s new government has publically supported new nuclear reactors, which is surprising given the Fukushima disaster. The twin realities of soaring energy consumption and restrictions on greenhouse gas emissions will make it very difficult for governments to completely dismiss nuclear as an option. This does not suggest a steady death, but sustained use for the foreseeable future.

And this is good news for Canada. The nuclear industry currently employs 60,000 people directly and indirectly, and by 2017 is forecast to add another 12,000 direct new jobs. Canada’s nuclear stations produce Cobalt 60 medical isotopes required for cancer treatment and other medical procedures. The CANDU reactor technology developed here in Canada is in use around the world, creating a source of national pride and a testament to peaceful nuclear development.

The nuclear industry in Canada faces many obstacles. Public opinion, cost concerns, safety and security, and long term waste storage will continue to fuel public debate. However the reality of climate change necessitates nuclear power. James Hansen, NASA’s top climate scientist, and others in the environmental community have suggested that nuclear power is our best hope for fighting climate change by slowing coal consumption and getting nations off of fossil fuels. A price on carbon emissions would certainly help to offset the high costs of nuclear construction and approvals, making it a more attractive option.

There is no slow death of nuclear, but also no rapid expansion. Perhaps maintaining the status quo is the best option as the debate continues.

In the Current Events blog, Andrew Reeves and Dan Beare discuss a wide array of environmental issues across the country and around the world, from politics and public policy to energy, natural resources, and environmental science.

Dan is an environmental professional currently living in Toronto. He specializes in energy, transportation, and climate change policy, corporate sustainability, and environmental planning and assessments. He recently completed a Masters of Environmental Applied Science and Management at Ryerson University. Dan’s posts usually appear bi-weekly on Fridays.

Dan is an environmental professional currently living in Toronto. Dan has previously published in Municipal World and Environmental Science and Engineering. He specializes in energy, transportation, and climate change policy, corporate sustainability, and environmental planning and assessments. He recently completed a Masters of Environmental Applied Science and Management at Ryerson University and has a Bachelors' degree in Environment and Business from the University of Waterloo.