Some folks are Superbowl fans; I’m more of a “superb owl” enthusiast. I stand in awe of these beautiful predators, all of which, from the diminutive screech owl to the imposing great gray, boast silent flight, crushingly strong talons and acute senses of sight and hearing.

Some folks are Superbowl fans; I’m more of a “superb owl” enthusiast. I stand in awe of these beautiful predators, all of which, from the diminutive screech owl to the imposing great gray, boast silent flight, crushingly strong talons and acute senses of sight and hearing.

One of the most superb among them has to be the snowy owl (Bubo scandiacus). Even if you’ve never seen one up close, you might be familiar with the species as represented by Harry Potter’s Hedwig or the ookpik of Inuit art and legend. Its common name is apt, both in terms of its preferred Arctic habitat and its plumage; while female and juvenile birds have varying amounts of black “barring,” the feathers of adult males are almost completely white. In terms of size,  the snowy owl is just as “great” as the Great Horned Owl with a wingspan that can exceed 1.4 m (4.5 ft). In fact, the density of its insulating feathers makes it the heaviest owl native to North America. 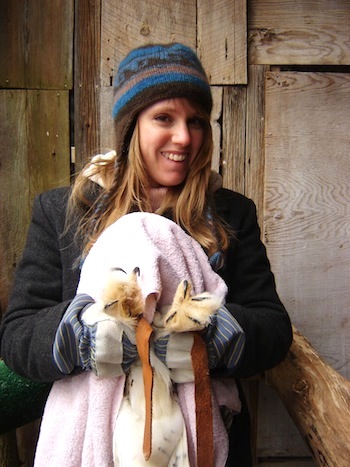 Ellen holding Quincy the snowy owl during a talon-clipping.
Photo by photo by Kay Marinac.

For a few months in 2010, I had the excellent fortune to admire a captive snowy owl almost daily. I even once got to hold her while she had her talons clipped. It was my job to keep a vice-like grip of her ankles so that my colleague could complete the pedicure quickly and without injury to any of us. When the owl struggled I could feel the incredible strength of her deadly feet and hear her sharp beak clicking impatiently under the towel covering her head. It was definitely exhilarating!

I’m clearly a snowy fan, so imagine my excitement in December when I heard that these birds were flocking to Eastern North America in the thousands. When birds travel outside of their normal range in large numbers, birders call it an “irruption.” Snowy owls have irrupted a few times in recent winters, but this year’s event is the most dramatic in decades in terms of the number of owls and their distribution. Some have strayed as far south as Florida and one was even spotted on Bermuda!

Currently the most popular theory explaining the irruption is that an abundance of lemming prey last summer caused breeding owls to produce more offspring than usual. When winter arrived and the food supply dropped, the owls dispersed widely in search of prey. That being said, due to the owls’ remote breeding locations and wandering ways, biologists have yet to develop a complete understanding of their movements. 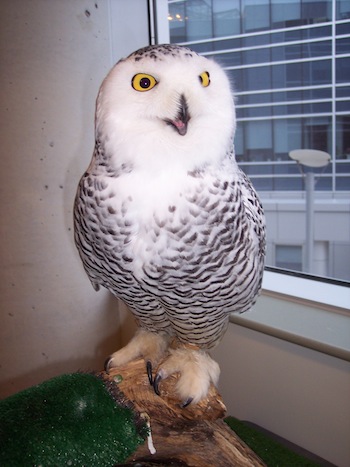 Quincy the snowy owl up close.
Photo by Ellen Jakubowski.

Some scientists have been capitalizing on the research opportunities afforded by the irruption. Project SNOWstorm is a collaboration between biologists, banders, citizen scientists and others that arose in response to the rare event. With backing from a private foundation and an Indiegogo campaign, researchers are using solar-powered GPS transmitter “backpacks” to track the movements of 20-25 owls as well as applying leg bands and taking measurements and tissue samples. The resultant data will be used to assess the birds’ physical condition and exposure to contaminants as well as providing insights into their behaviour. Sightings reported by citizen scientists via ebird are also shedding light on where these birds go and how irruptions differ year to year.

From all the reports flowing in, it sounds like you can’t swing a cat without hitting an owl. Even total dilettante birders like myself go out at times like this. I’ve been religiously scanning my email for reports of nearby owl sightings via electronic mailing lists and referring to maps on ebird. About five times now I’ve set out driving painfully slowly along country roads amid questionable conditions in the hopes of seeing a snowy but alas, not a glimpse thus far. If that changes, I’ll let you know.

If you haven’t seen one yet either and would like to have a go, here are a few tips (for what they’re worth):

Have you seen a snowy owl this winter? Tell us about it!