The crown jewel of Ontario’s provincial park system is being recognized for hitting a crucial milestone not often associated with our parks system: removing garbage.

With approximately one million visitors flocking to Ontario’s largest and most popular park destination, Algonquin Park in Central Ontario is earning praise from the province’s Environmental Commissioner for improving their waste diversion rate from 20 per cent in 2004 to 40 per cent overall by 2011/2012.

The crown jewel of Ontario’s provincial park system is being recognized for hitting a crucial milestone not often associated with our parks system: removing garbage.

With approximately one million visitors flocking to Ontario’s largest and most popular park destination, Algonquin Park in Central Ontario is earning praise from the province’s Environmental Commissioner for improving their waste diversion rate from 20 per cent in 2004 to 40 per cent overall by 2011/2012.

And 40 per cent is simply the average: six sites in the park diverted more than 50 per cent of their waste, with one – the Algonquin Park Visitors Centre – hitting 70 per cent diversion. 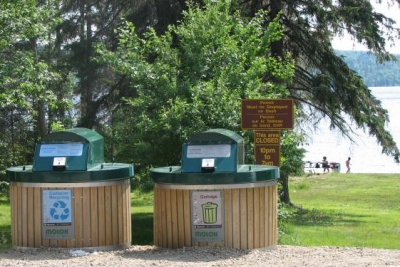 “It’s encouraging to see how a few dedicated public servants can change the way Ontario’s campers experience our parks, while keeping more waste out of landfills and educating visitors and staff about responsible waste management,” said Commissioner Gord Miller on his blog.

The ECO recognizes a government program or project each year that “best meets the goals of the Environmental Bill of Rights” and is judged by an arms-length panel that selects the winner.

Miller stated that it’s his belief that this project, and others like it, will demonstrate that improving waste diversion percentages can be done “in any context.”

“If applied across Ontario’s protected area system, improved waste management could help educate park users and lessen the impact of the more than 10 million visits that these special places receive each year,” he said.

A spokesperson for Natural Resources Minister Michael Gravelle agreed there is an opportunity to spread the importance of proper waste diversion. 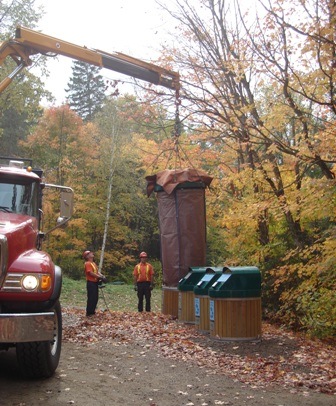 The park was able to achieve such a high diversion rate through the use of Molok containers, vertically oriented waste units that are planted, in a way, roughly two-thirds underground.

“The containers are visually appealing, and are in over 30 locations along the Highway 60 corridor [for] a total of over 130 Molok containers” in the park, Kowalski said.

The Molok units work by installing a liftable bag into the unit and securing the lid to prevent wildlife from getting their paws on the waste we leave behind. To empty the container when it’s full, the bag is lifted from the unit and emptied from the bottom into a waste recovery truck. The reusable bag is then put back into the container to be filled again.

The Friends of Algonquin Park state on their website that the entire emptying process takes three minutes, meaning all of the park’s 130 units can be emptied in little more than six and a half hours.

Built into this system is the ability to measure the amount of organic and recyclable material the park is diverting overall, but also within the park, to identify which sites are collecting their fair share and which sites need a boost.

The 215 tonnes of recyclable material ­– paper and plastic containers in addition to organic waste – diverted from landfill in 2012 alone, through the park’s use of Moloks, were taken to the Ottawa Valley Waste Recovery Centre for processing.

The park hopes to reach a 60 per cent diversion threshold in the coming years through greater public education efforts. But even at 40 per cent, the park is well above the provincial rate, which has hovered at 22.6 per cent in recent years, according to the Recycling Council of Ontario.

Want to do your part? Next time you’re visiting Algonquin ­– or any other of Ontario’s hundreds of provincial parks – make sure your recyclable and organic waste finds it into the appropriate bin whether you’re passing through for the day, camping off the highway or canoeing into the interior.

With your help, Algonquin staff can reach 60 per cent sooner than expected.

Andrew is a freelance environmental writer and reporter based in Toronto with a Masters in Geography from the University of Toronto. When he’s not writing he’s usually cycling around town, thinking about what to write next. Andrew’s posts appear weekly on Thursdays. You can read more of Andrew’s stuff at his own blog, The Reeves Report, or follow him on Twitter.