Efforts are underway in the Netherlands to sell the public on an insect diet as a remedy for anticipated food shortages. A supermarket chain has begun selling edible insects, and a Wageningen University professor is working with local chefs to produce an insect cookbook.

Efforts are underway in the Netherlands to sell the public on an insect diet as a remedy for anticipated food shortages. A supermarket chain has begun selling edible insects, and a Wageningen University professor is working with local chefs to produce an insect cookbook.

Jumbo stores in Groningen and Haren are offering a burger of mealworms and a crispy snack from the larvae of the honeycomb moth. Some 400 other stores of the chain will follow suit soon. “The new products mean Jumbo is offering its clients a healthy and sustainable alternative to fish or meat,” the company said in a statement. Many believe that such an alternative must come.

The UN’s Food and Agriculture Organization (FAO) estimates that about two billion of the world’s population already eat insects as part of their diet, but such a diet is all but non-existent in Europe and the Americas. The very thought of it makes many people queasy, but with projected population growth and limited land for raising livestock, eating insects  will be an important alternative.

That’s why Arnold van Huis is publishing a cookbook of insect-based recipes. His work is part of a Europe-funded project called PROteINSECT, which promotes insects for humans as well as for animal feed. According to van Huis, insects are higher in protein and lower in fat than meat, reproduce quickly in little space and are much cheaper to breed.

Furthermore, he says, it will be environmentally destructive to continue serving the growing demand for meat. Livestock already use 70 per cent of the world’s agricultural land and increasing this acreage would mean further destruction of the rainforest and other natural lands. Insects, on the other hand, are highly efficient to cultivate. Ten kilograms of feed for them produces six to eight kilograms of food, compared to only one kilogram for beef. Insects also produce less greenhouse gas and manure, and are less likely to transmit diseases to humans than are our fellow mammals like cattle or pigs.

Beetles, caterpillars and locusts are already part of the human diet in Asia and Africa, and other insects that could be useful are bees, ants, dragonflies and cicadas or their larvae. They can be bred on very little land, and the Netherlands government is financing a project to raise them on waste from the food and beverage industries, such as the grain residue from beer brewing and the pulp from fruit juice production. 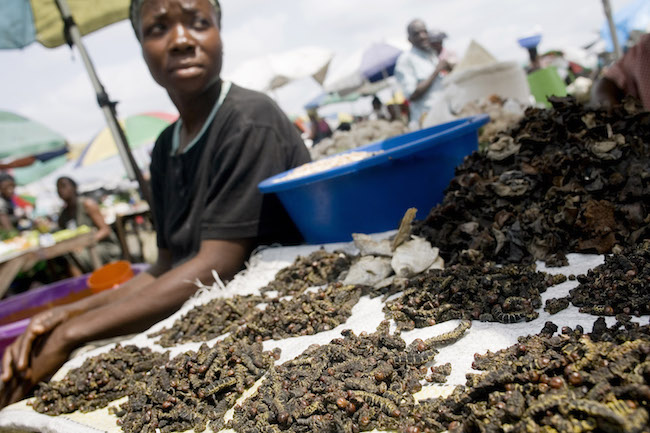 van Huis is well aware of the “yuck reaction” he gets when he discusses his efforts to make insects part of the human diet in western countries. But he thinks insects could first be introduced to the western diet as ingredients for such things as meatballs and sauces. They could also be dry roasted as a tasty substitute for nuts.

One of the chefs he is working with, Henk van Gurp, doesn’t think there is any reason to disguise the fact that insects are being eaten. He has created two gourmet dishes using them; quiche from mealworms and praline candies from buffalo worms. He feels that the insects taste all right, and that westerners reject them for psychological reasons.

van Huis thinks the price of meat will soar when the demand for it exceeds what the available grazing land can produce, and sees the day when a Big Mac will cost $150 and a “Bug Mac” $15, so we’d better get used to the bugs now.

Your usual The Mouthful contributor, Genevieve Fullan, is on a brief hiatus and will be back in 2015.

Ted is a former editor for Chuck Emerson Media Services, How to Germany and Getting Around.