Climate change negotiations are complicated, Mark Terry and the Youth Climate Report (YCR) team is helping everyone see through the policy language and understand the issue at hand. Using a new Google application called Fusion, Terry has created an interactive map with links to video interviews with climate scientists from all over the world. The videos are placed on the map in coordination with the location of the research.

Climate change negotiations are complicated, Mark Terry and the Youth Climate Report (YCR) team is helping everyone see through the policy language and understand the issue at hand. Using a new Google application called Fusion, Terry has created an interactive map with links to video interviews with climate scientists from all over the world. The videos are placed on the map in coordination with the location of the research.

Terry and  the YCR report team has produced a feature-length documentary every year on new climate research for the United Nations (UN) to present at the Conference of Parties (COP) climate summits since COP17 in Durban, South Africa.

The new multilinear documentary is of 3-5 minute long videos, designed to help country negotiators at COP see the big picture of new climate research and make connections needed in order to reach a global agreement. Each video is produced by a student (over 50 contributed to this project) who has interviewed a climate scientist about the latest research.

“The documentaries are a data delivery system for the policy makers,” said Terry, who is currently at COP21 to meet with negotiators from various countries to present the map and research.

By accompanying their feature documentary with the multilinear documentary series, Terry says it “gives [viewers] a 10,000 foot view of all the climate research being done.” The multilinear doc series also allows for all the videos to be showcased as opposed to just a “highlight reel.”

Along with entertainment lawyer John Kelly, Terry founded the organization Youth Climate Report. Together they decided to take advantage of the partnership developed with the UN to produce a documentary every year for the climate summit. Challenged with the financial constraints to produce a feature length documentary every year, they came up with the idea to recruit students from around the world to shoot short interviews with their local climate scientist and send them to the YCR. The organization continues to provide youth around the world with the opportunity to add to the global dialogue surrounding climate change and enhance their digital journalism skills.

Terry’s partnership with the United Nations began in 2009, when the International Polar Year research would be presented at the United Nations Climate Conference. International Polar Year was a call to all global scientists to conduct research in the Arctic and Antarctic regions. The arctic, Terry said, was well covered due to its accessibility and therefore had a great deal of media climate coverage in the region. There was very little media coverage on the climate research being conducted in Antarctica. “I took that as an opportunity to bring a film crew to Antarctica and film a documentary about it,” said Terry.

At the time, Terry’s film The Antarctica Challenge: A Global Warning, was the only documentary on climate research being produced about Antarctica. “When I got back from filming, the United Nations were hosting COP15 in Copenhagen and asked if they could show my film.” After screening The Antarctica Challenge over 25 times, Terry found that climate negotiators appreciated the medium of film over written text.

“Most policy makers are simply politicians, that have been elected into their positions,” said Terry. “They aren’t scientists and so they found that reading the scientific journals and texts difficult due to the language.” The documentary showcases the same scientists authoring the reports policy makers are required to read. By viewing the documentary, it gave them the visual context of the research and made it easier to understand. The long lasting impact of the YCR film series, says Terry, is that they have been able to create digital archives of climate data. Through the combination of time, space and location elements this information provides invaluable visual analysis to the data for the policy makers, as they are able to view and compare research in an area over a period of time. It adds a rich visual resource that policy makers can use collectively as well as individually each year.

The Polar Explorer is notable for its participation at COP16 for influencing negotiators to recognize that “melting land ice will contribute significantly to global sea level rise over the next 100 years and that coastal communities must begin to prepare for this event.”

The full-length documentary is being screened in Paris at COP21 this weekend. It was directed by Roy Kocur.

Mark Terry’s GIS map and the multilinear Youth Climate Reports documentary series can be viewed at UNEP and UNFCCC website.

You can watch the sixth edition of Youth Climate Report produced by Mark Terry and directed by Ray Kocur here. 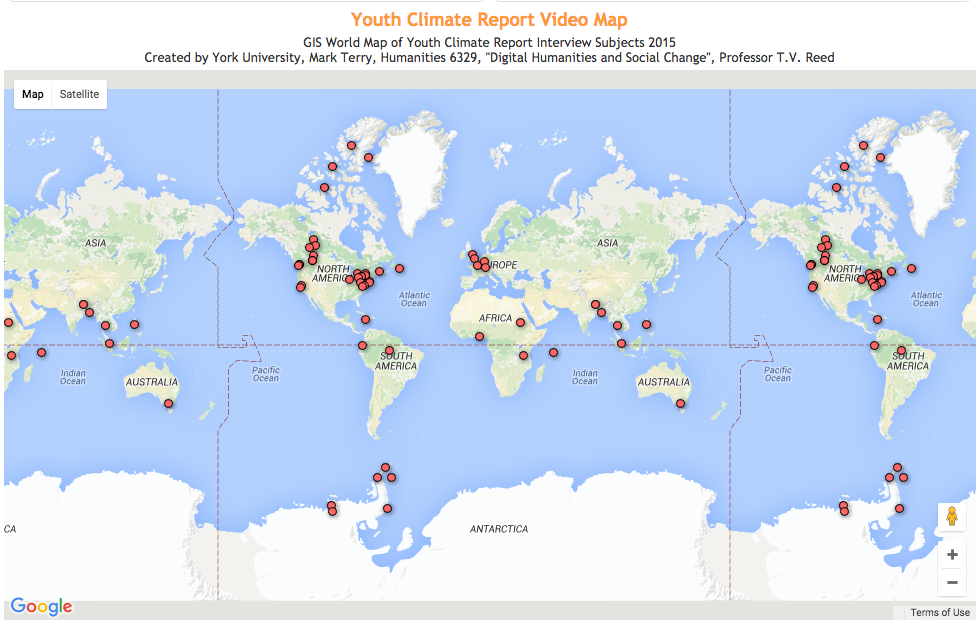 Eunize Lao is the Editorial Intern and a third-year Environment and Business student at the University of Waterloo.