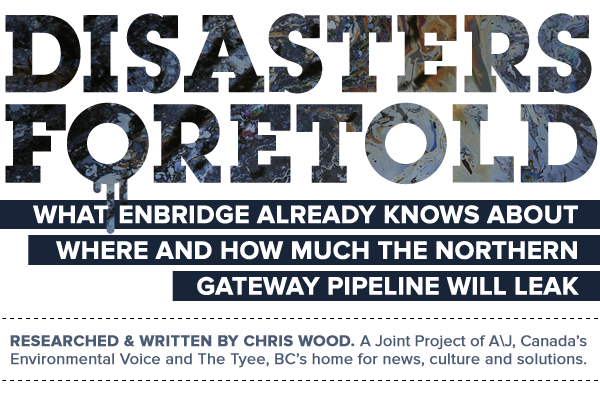 Calgary’s Enbridge Inc., through its subsidiary Northern Gateway Pipelines Inc., would like to build a $5.5-billion pipe to carry diluted tar sands bitumen from Alberta to the Pacific for shipment to Asia. At the request of National Energy Board [NEB] regulators, Enbridge hired consultants to forecast and map exactly where bitumen would go if spilled from any rupture along the pipeline route, and how much of it might be expected to enter the environment before a leak was isolated. We unearthed the consultants’ graphic evidence.

The route will cross 669 fish-bearing streams, scores of wetlands, the headwaters of the Peace-Athabasca and the Fraser rivers and two mountain ranges.

The proposed pipeline will, in fact, be two 1,177-km pipelines. One that is 91.4 cm (36 in) in diameter will push tar sands bitumen diluted with solvent from Fort Saskatchewan, AB, to Kitimat, BC — delivering more than half a million barrels of petroleum slurry a day to the West Coast port. A second pipe, 50.8 cm (20 in) across, will pump 193,000 barrels a day of solvents, separated from the bitumen in Kitimat, back to Alberta for reuse. The twin pipelines’ route will cross 669 fish-bearing streams, scores of wetlands, the headwaters of the two most important western Canadian rivers — the Peace-Athabasca and the Fraser — and two mountain ranges. Much of the route is remote from access roads.

In January 2011, the NEB asked the pipeline company to say more about how it would reduce the “potential for far-reaching environmental and human consequences in the event of a hydrocarbon release.”

In its reply, the company said that its design decisions, “including the pipeline route, geotechnical mitigation, watercourse crossing location and crossing method and selection of suitable construction materials, will … contribute to minimizing” the risk from a spill. It illustrated the importance of route selection with maps (prepared by BC-based consultants AMEC Earth and Environmental Inc.) superimposed on aerial photographs to show where several lengths of proposed pipeline had been rerouted to reduce risk.

As well, the company submitted, “Northern Gateway’s entire pipeline and terminal operations will be constantly monitored, including pipeline operating pressure, pipeline flows, pumps and pump station operation and leak detection. Should operating abnormalities or a pipeline leak occur, alarms will notify qualified operators and the pipeline system will be shut down.” In other statements, the company has further promised to pre-position equipment, including booms and oil-skimmers, at various locations along the route, and says it will develop detailed spill containment and clean-up plans based on “existing protocols” used on its other pipelines, “augmented by project-specific emergency response plans.”

Nonetheless, responding to another of the regulator’s requests, the pipeline company hired Australian engineering company WorleyParsons Inc. to calculate what would happen at each kilometer of the proposed route if, despite its precautions, one of its twin pipelines did in fact rupture. The task required examining landscapes such as foothills, plateaus and mountains, considering the inclination of the pipelines at the point of spills, and the location of emergency shutoff valves. In late 2012, WorleyParsons reported its findings in sets of images and graphic data.

One set shows, for each kilometer of the pipeline route, exactly where released bitumen or solvent would flow – potential spill flows are shown in red against topographical maps of the affected areas. A second set shows, as vertical bars on a graph, how much bitumen could be expected to flow at each kilometer point from a “full bore” or complete rupture of the line, before check-valves (indicated as small triangles) are closed to prevent further leakage. The line below the release volume bars indicates the presence of more vulnerable “consequences areas” within the pipelines’ right-of-way.

With 101 kilometres to go to Kitimat, the proposed pipelines cross the southern tip of BC’s Burnie-Shea Provincial Park and Protected Area. The only access to this nearly 35,000-hectare backcountry is by helicopter, float plane or foot. There, the pipelines enter the first of two tunnels that will carry them under the Coast Mountain range. Emergency crews trying to clean up a rupture at the “Clore Tunnel East Portal” would have to travel seasonal forest service roads across more than 60 km — as the crow flies, so further and less directly on the ground — of Canada’s most vertical terrain, indicated here by dense elevation contours. Spilled oil or solvent would flow down the Clore River toward the Skeena. (Download PDFs of original documents by clicking these underlined links throughout this article.) 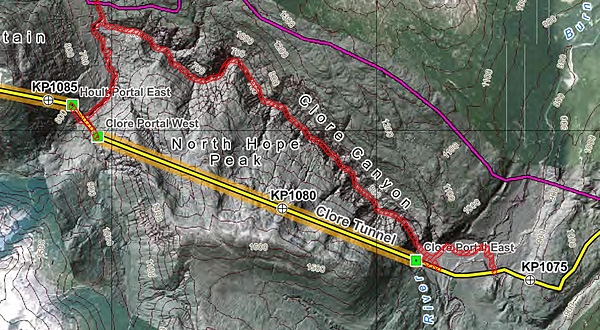 The two tunnels are among changes proposed in the pipeline’s route, replacing a long oxbow (purple in consultant AMEC Earth and Environmental’s illustration) through a remote mountain canyon plagued with rockslides and avalanches. In the company’s estimation, the tunnels will reduce the anticipated spill risk — a factor of a spill’s likelihood of occurring, and its potential consequences (see the box at right of the illustration). Whereas the previous route would have incurred the most extreme spill risk factor of 25, AMEC evaluated the tunnel plan as posing a minimal rating of one (see the table above the illustration for details).

Triangles on the spill extent maps indicate that Enbridge also plans to install check-valves where the pipelines enter or emerge from their tunnels. Even so, the stubby black bars on either side of kilometer point [KP] 1084, where the pipelines are briefly exposed between the Clore and Hoult tunnels, indicate that ruptures at or between the two tunnel portals would still release nearly 6,000 barrels of bitumen. That’s more than the total amount that another company, ExxonMobil, acknowledged was leaked after a March 2013 pipeline breach in Arkansas sent crude running like a river down a suburban street.

Just south of Fort St. James, BC, the pipelines would cross the Stuart River. The Stuart is a vital travel corridor for chinook and sockeye salmon. As many as a million fish travel past the pipelines’ planned crossing point to spawn further upstream every year. According to BC Parks, the river is also a critical habitat for endangered white sturgeon. Elk, moose, bears, swans and eagles also use it as a travel corridor. WorleyParson’s map shows how oil or solvents leaking from the two pipelines at any point for kilometres on either side of the crossing would flow down smaller tributaries to reach the Stuart River. 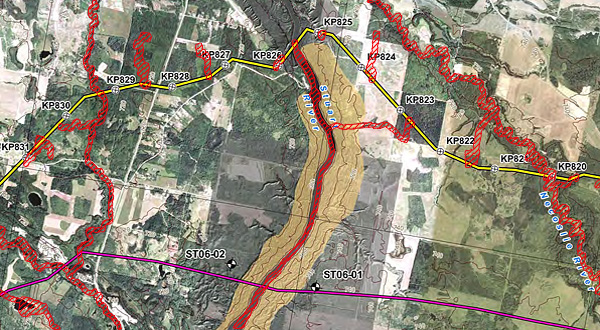 Here, too, the company realigned its proposed route — taking the pipeline across the Stuart River further north than originally planned. The new route, as it explains above the illustration, avoids “very extensive deep-seated slides … on east and west approaches.” The unstable terrain would have raised the likelihood of a pipeline rupture to the highest possible rating of five. Multiplied by the equally extreme potential consequences of a spill in such a critical environment, the original course was assessed as posing the maximum risk level on the 25-point scale. The company ranks the risk of the realigned route, plus other measures including a tunneled ‘crossing’ of the Stuart itself, at a minimal one to two points.

A failure at any point in the first few kilometres west of the Stuart River would release some 30,000 barrels – a larger spill than the worst disaster in Enbridge’s history to date, Michigan’s Kalamazoo River in 2010.

Notwithstanding the reduced risk assessment, tall black bars on the associated volume graph predict that a failure at any point in the first few kilometres west of the Stuart River would release some 30,000 barrels (1.26 million US gallons) of bitumen. That estimate foresees a larger spill than the worst disaster in Enbridge Inc.’s history to date, which saw a million gallons of diluted bitumen flow into Michigan’s Kalamazoo River in 2010. A subsequent US investigation blamed the company’s “culture of deviance” from safety norms for its slow response to the leak; operators had repeatedly dismissed automated warnings that the pipeline was losing pressure. Clean up has so far cost more than $1-billion.

Enbridge proposes to build a head-end collection point and terminal for its pipelines at Fort Saskatchewan, AB, near the North Saskatchewan River. That river flows eventually into Lake Winnipeg. The pipelines’ route west would leave the Saskatchewan basin and spend the next 500 km crossing the headwaters of the Athabasca, which later joins the Peace and Slave rivers to contribute its flow to the Mackenzie and the Arctic Ocean. The Athabasca’s headwaters already receive effluent from pulp and paper mills, but until now have been relatively free of the hydrocarbons entering it downstream from tar sands extraction operations. 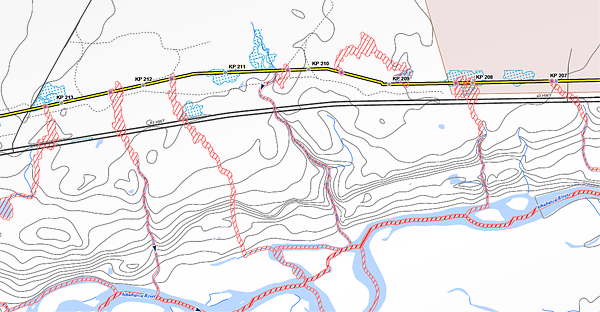 The pipelines’ planned route hugs the Athabasca River particularly closely around the town of Whitecourt, Alberta. Dark green shading along the “linear extent of consequence area” line below the volume bars indicates that bitumen or solvent from any rupture along this portion of the route would impact high-value, hard-to-clean riparian wetlands. Volume bars indicate that ruptures could release 15,000 barrels of bitumen before being controlled — about three times the amount that leaked from ExxonMobil’s Pegasus line earlier in 2013. 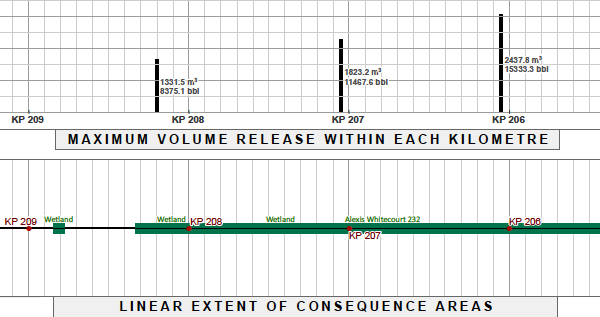 Images were retrieved from the online public record archive of the National Energy Board of Canada. For a public registry, the NEB’s archive of documents relating to the work of the Joint Review Panel currently weighing the Northern Gateway proposal is not easy to search. If this bookmark doesn’t work, follow these steps to the full collection of maps and tables on which this analysis is based:

Start by going to this URL: gatewaypanel.review-examen.gc.ca/clf-nsi/index.html. Click “English.” (The steps behind the “French” button are similar, although there is one discrepancy in document titles, indicated three paragraphs below.)

In the Public Registry menu in the right-hand column under the banner, click on “Public Registry.” This opens a one-paragraph page where you must again click on “public registry” in the body text. (The NEB apparently wants to make very, very sure that you really want to see these public documents.)

This opens an active index page of categories of frequently updated documents related to the proposed pipeline, like this: 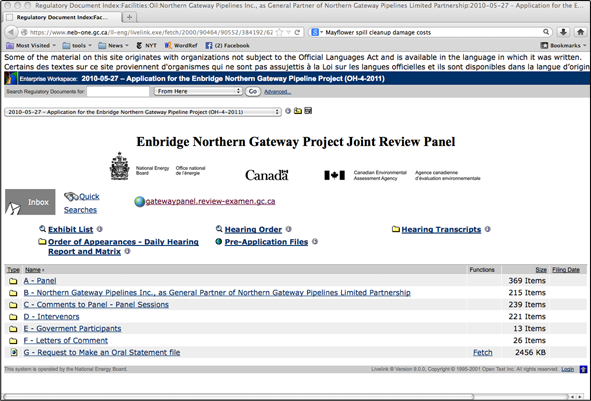 This should open yet another index page. Congratulations, you made it!

Want to see more of this kind of coverage? Subscribe or donate to keep it coming!

Check out more pipeline coverage by A\J, including these top stories:

Dig deeper into the Northern Gateway controversy with these articles from The Tyee:

The Pipeline Plan that Rattled BC, Explained
Enbridge Not Positioned to Pay for Gateway Oil Spill: Report
How Enbridge Sawed Off Good Relations with BC First Nations
How First Nations Are Gearing Up for Legal Battle Against Gateway
Shareholders Concerned About Cost of Gateway Opposition
Overheard: Asia’s View of Alberta, Tar Sands and Pipelines

Chris Wood, is an author, speaker and journalist. He first wrote about the environment in the 1970s, winning awards for his coverage of nuclear power and agrochemicals. His most recent book, Down the Drain: How We Are Failing to Protect Our Water Resources (2013), written with Ralph Pentland, details how successive federal governments have neglected Canada’s water and proposes new thinking to instigate change. Wood, his wife and their two bull terriers live in Cuernavaca, Mexico.