Enthused members of the A\J team went to a panel discussion hosted by the Kitchener-Waterloo Art Gallery last week. Featured on stage were Justin Langlois, artist and co-founder of Broken City Lab, Scott Sorli, architect and co-founder of Toronto’s convenience window gallery  and Steven Logan, urban researcher and member of the Visible City project. All of them were trying to answer a sprawling question: “What is our urban imaginary?”

The practice of sculpting an ideal city that leads to universal happiness dates from Plato to Frank Lloyd Wright to right now. Though the panellists made it clear there are infinite ways to experience a city, there was contention amongst about whether good and bad cities truly exist.

Some of the liveliest dialogue was stirred by Langlois’ Broken City Lab project, which aims to inspire the re-imagination of Windsor, Ontario, through creative street-level interventions. The artist-led collective created a document of 100 ways to save the city in 2009. Some are hilarious (“lie about this city to your friends in other cities”), some playful (“make I heart Windsor t-shirts”) and some just plain wise (“stop believing in antagonism”).

“Imagine yourself through crisis,” is the Broken City Lab adage. In Windsor, a recovering post-industrial city, “even the graffiti artists are depressed,” Langlois chirped. While there were a few good belly laughs at Windsor’s expense, Langlois’ organization was applauded for its focus on locality, as opposed to trying to emulate other cities. 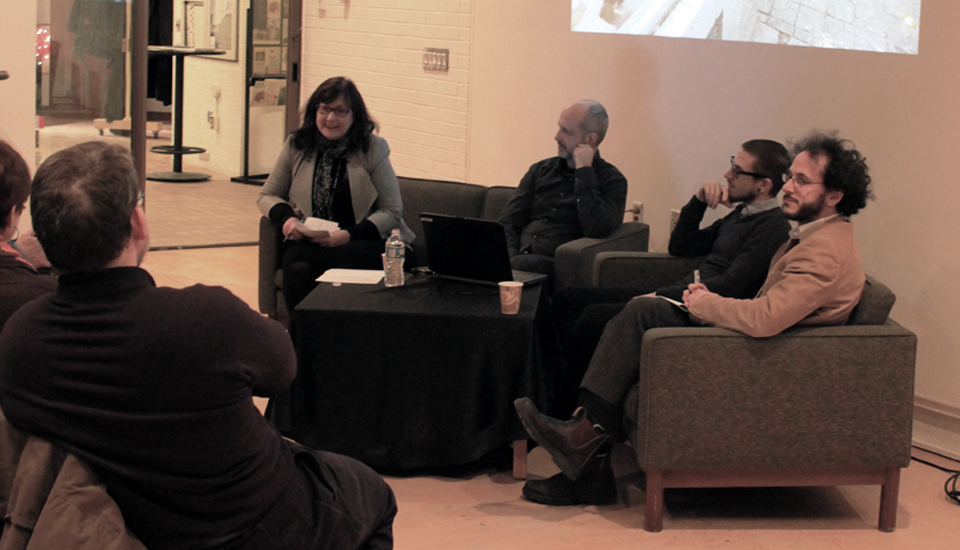 Scott Sorli’s ongoing project, the 24/7 window convenience gallery, imagines something greater for a vacant retail façade — an exhibit space that “engages, experiments and takes risks with the architectural, urban and civic realm.” The window faces a bus stop and has been outfitted with contemporary pieces by artists, architects and designers that command immediate engagement from passers-by, turning the gallery experience into a public one.

Logan looks to the past to engage with the urban imaginary. By riffling through archives and dusty basements, he unearthed the deeper identity of the Toronto suburb of Willowdale as part of the Leona Drive project. This exhibit illustrates how old photographs and memorabilia communicate the changing tides of local identity and culture, reconciling separations between time and place.

It was great to see so many people engaging with the urban imaginary, and the event left us wanting to attend more of the KW|AG Idea Exchange series. It also gave us a new perspective on Kitchener-Waterloo, a unique place carved by the past that continues to be etched by the collective imaginary.

We’d love to hear your comments about great projects going on in other communities across Canada, or your ideas about the urban imaginary you’d like to see around you.

Julie is an urban planning graduate student at the University of Waterloo, focusing on sustainable transportation.