Trudy Sohl got to try out one of Kitchener’s new community access bicycles for the women’s bike ride last week. Because she doesn’t have a bike, she was particularly enthusiastic that she and her daughter were able to take the new cruiser-style bicycles for a spin downtown. And the best part of the new-and-improved bike share system?

Trudy Sohl got to try out one of Kitchener’s new community access bicycles for the women’s bike ride last week. Because she doesn’t have a bike, she was particularly enthusiastic that she and her daughter were able to take the new cruiser-style bicycles for a spin downtown. And the best part of the new-and-improved bike share system? Trudy was most excited about the baskets, but the pre-equipped locks, lights and rear racks will make running (or should we say cycling?) errands a breeze.

Time to hail a CAB

This week marks the soft launch of The Working Centre’s Community Access Bikeshare (CAB) project, so Trudy will no longer be alone in riding a silver cruiser around town. The CAB aims to provide an affordable, accessible, user-friendly service, with low operating costs, within the existing community infrastructure. As of this week, two stations have been launched at the Charles St. Terminal and Sun Life Financial at King and Union, and as more stations are added in the coming weeks they’ll be updated on this map. Close to 12,500 people work and 42,300 people live in downtown Kitchener, so a bike share program is a logical next step as the city strives to become a more sustainable and multi-modal city.

CAB can help solve the “last mile problem” by connecting people from transportation hubs to their final destination in a more efficient way than walking. This is especially important given that the region is heavily investing in light rail transit, which is scheduled for completion in 2017.

Bike shares are often criticized when they are implemented in cities that do not have proper cycling infrastructure, as residents and visitors are unlikely to rent a bike if they are afraid to cycle on the roads. However, Kitchener has been working hard to ensure that residents feel safer on city streets by installing “super sharrows” down King St. and hosting bicycle-themed events that aim to educate cyclists and motorists about road-sharing safety.

Kitchener’s system is different than the high-tech Bixi bikes seen in cities like Montreal, Toronto, Boston and New York City, as The Working Centre has used a community-development, relationship-building model that is more fitting of the mid-sized cities of Waterloo Region. Which means that when CAB advertises that bike maintenance workers will “meet members, create trust, and listen for immediate user feedback,” they mean it.

While some might consider it a downfall that you can’t just insert your credit card into a machine to start using the bike share at any time of day, it’s hopeful that by having to purchase your $40 membership online (currently discounted to $30 for the remainder of the year) or at The Working Centre, the people that do sign up will be truly engaged in the system, and there will be less theft and vandalism. You can, however, use your credit card to pay online, or use cash to pay at the Working Centre, which is a definite positive over the systems like Bixi that require a credit card to subscribe. 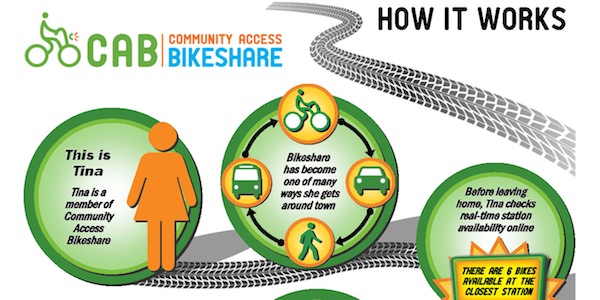 Click the image to see the full pdf of How It Works.

Public bike sharing has been around since the 1960s, but due to increasing transportation pressures, it has been gaining momentum over the past five years. Today, bike share programs can be found in more than 500 cities around the world. Their benefits include enhanced mobility and decreased congestion, economic stimulus and job creation in bike-related sectors (including tourism), increased physical activity and improved citywide public perception. While the wide-ranging benefits of cycling are well documented, bike share programs do encounter financial problems due to high upfront costs, insurance and theft. It’s been a summer of bike share controversy as large North American cities try to strike a balance between their program’s cost and level of service.

In May, Toronto’s mayor Rob Ford suggested dissolving its Bixi program, after it was announced the company could not make its debt payment (owing approximately $1-million to suppliers). This sparked controversy as it was only launched in 2011 and because it’s close to breaking even on its day-to-day operations. Ford kicked back the decision to city council, which will decide on the fate of the program this fall. Later that month, the Wall Street Journal made a video lambasting New York City’s Citi Bike program, in which editorial board member Dorothy Rabinowitz stated the Big Apple’s sites “are absolutely begrimed by these blazing blue Citibank bikes.” Not to mention that the city is “helpless before the driven, ideological passions of its leader,” and “all-powerful” bike lobby. Regardless, after eight weeks the program is growing strong, drawing 400 to 600 new annual members per day. Later in July, it was announced that Vancouver is planning a bike share program with an integrated helmet rental system (which has never been attempted in Canada) for early 2014.

For CAB and other bike share programs to take flight, cities must actively invest in cycling infrastructure, so that people feel comfortable biking. Participating in your local bike share can be more convenient than owning a bike and save you time. You also don’t have to worry about maintenance or buying accessories like lights or locks. Bike sharing is no silver bullet, but it can play a part in making our cities more livable, navigable and fun.

Have you ever used a bike share system? Would you?

Julie is an urban planning graduate student at the University of Waterloo, focusing on sustainable transportation.