Witless Bay Ecological Reserve in Newfoundland is home to North America’s largest breeding colony of Atlantic puffins, hosting over 260,000 pairs each summer. While the reserve’s islands provide a safe haven, fledglings are drawn towards the artificial lights of coastal communities where they encounter nighttime hazards like traffic and cats. Clouds and fog compound the problem by obscuring the birds’ primary navigation tool: the moon.

Witless Bay Ecological Reserve in Newfoundland is home to North America’s largest breeding colony of Atlantic puffins, hosting over 260,000 pairs each summer. While the reserve’s islands provide a safe haven, fledglings are drawn towards the artificial lights of coastal communities where they encounter nighttime hazards like traffic and cats. Clouds and fog compound the problem by obscuring the birds’ primary navigation tool: the moon.

Fortunately volunteers have stepped up to escort youngsters back to the water before they get in trouble. Upset at seeing fledglings, whimsically referred to as “pufflings,” coming to grief along roads, Juergen and Elfie Schau started a “puffin patrol” in 2006. CPAWS NL started partnering with the Schaus in 2011 and now up to 70 volunteers are involved in the program each year. In 2012, it expanded to include Leach’s storm-petrel, another seabird disoriented by lamplight. 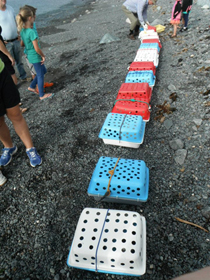 The Patrol runs from August to October, when fledglings are leaving the nest. Shifts of volunteers scour Witless Bay and neighbouring communities from 9 pm to 2:30 am, netting lost fledglings and securing them in crates overnight. The birds are also banded to assist with future research. Puffins are released the next morning, whereas the nocturnal petrels are released the same night. The number of rescues per year fluctuates with changes in moon cycles, weather patterns and prey availability; fewer than 15 individuals were rescued in 2011, about 500 in 2013 and 80 in 2013.  With prevention in mind, the program also runs a “Dim Your Lights” campaign targeted at businesses and homeowners. 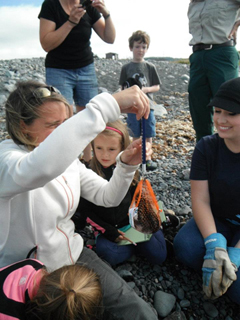 While the Patrol makes a life-or-death difference for birds, its impact on humans is not insignificant. Nick White, a GIS specialist from St. John’s, volunteered for the first time this year with his partner, Kristen. “I figured it was something really unique and rewarding to share with her and she’s big into animal rights so distressed puffins were an easy sell.” They fortunately never encountered a puffling in distress, but still had the opportunity to witness a release. “Everybody comes together the next morning to let the stranded birds go back to the water, which is completely inspiring. Kids really love seeing it.”

I also heard from Leah Mahoney, Marine Conservation Coordinator for Conservation Corps living in Goulds, NL. She interned with the Patrol in 2012 and volunteered this year. Some of the 50 rescues she’s been involved in have proven unforgettable. “One night when I was patrolling the Burnt Cove area, I saw a little puffling fly into a nearby ditch… I caught him no problem, but as I was putting him safely into a bird crate, another puffling flew over my head, and another one, and another one flew across the street, and then another one landed on my car, and one in the middle of the road. In a span of about five minutes, I had 15 birds running and flying all around me. Luckily, another volunteer was also in the area, and he helped me round all of them up, but it was so magical to see. Like something out of a movie.”

Both Leah and Nick found their experiences rewarding and would encourage others to get involved. “Once you see these birds in their own environment or rescue your first baby puffin, your world changes and it’s an incredible feeling,” says Leah. 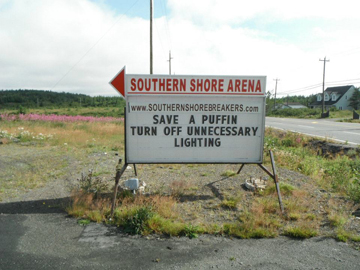 The Witless Bay community is overwhelmingly supportive. 80 per cent of the Patrol’s volunteers are local residents and many businesses diligently dim their lights during fledging season. “We have children, students, parents, even grandparents helping out in anyway they can,” Leah reports. Nick encountered “a few people who whizzed by in trucks who didn’t care much for us, but they were definitely a minority. Developers are still an issue, but I’m optimistic they will accommodate.”

With the oil industry drawing more people to communities such as Witless Bay, conservation efforts will have to be augmented to ensure puffins and other species remain protected. “I would love to see similar patrols elsewhere, possibly expanding this patrol to other coasts, communities and different birds,” suggests Nick. “However, you can’t just start catching birds and claim you’re helping anything…there are actually really strict and important laws around migratory birds. Setting up the handling protocols and developing training is the top priority.”

Spreading the word is important, too. “I feel like seabirds own this place,” Nick muses. “They’ve been here forever and we’re just sort of ‘renting’ from them. Since people settled in Newfoundland, birds have been endlessly persecuted, some to extinction. I think with development, offshore drilling, and urbanization, it’s more important than ever to let people know about the unnatural stresses put on them. Birds come here from all over the world – in the millions – and we are in the position to learn much from them and to make a huge difference in their survival.”