A “cool” and affordable high performance electric vehicle has been as elusive as sighting a snow leopard in the Himalayas. We have seen so many hybrids and hybrid versions of the same old auto models in the marketplace of late that we have all but lost interest entirely in the general project to make our cars use renewable and alternative energy sources as a goal.

Why do sustainable cars always have to be cute?

A “cool” and affordable high performance electric vehicle has been as elusive as sighting a snow leopard in the Himalayas. We have seen so many hybrids and hybrid versions of the same old auto models in the marketplace of late that we have all but lost interest entirely in the general project to make our cars use renewable and alternative energy sources as a goal.

Why do sustainable cars always have to be cute?

What is it going to take to catapult electric transportation into the realm of Harrison Ford’s Bladerunner, and why do sustainable cars always have to be cute?

A truly compelling electric vehicle or two on the road could change our historical relationship with our cars and transform consumer expectations of the automotive industry instantaneously. Selling sustainable transportation will never succeed by requiring downgrading, compromises or automotive emasculation.

Electricity as a source of energy is fierce, powerful and dangerous. Electricity can kill you. The scientist responsible for giving us the design of the modern alternating current electricity supply system, Nikola Tesla, was himself a brilliant, untamable badass. Even Tesla, the 1980s metal hair band, had its moments of uncontrollability, both musically and hirsutely.

Silicon Valley’s Tesla has done so much to further the cause of sustainability by designing its landmark electric sports car, but has since gone further by promising to give away the company’s entire patent portfolio.

Tesla’s CEO, Elon Musk, released a statement saying, “Tesla Motors was created to accelerate the advent of sustainable transport. If we clear a path to the creation of compelling electric vehicles, but then lay intellectual property landmines behind us to inhibit others, we are acting in a manner contrary to that goal. Tesla will not initiate patent lawsuits against anyone who, in good faith, wants to use our technology.”

Porsche just released a new hybrid Panamera that can reach 130 kilometers an hour and BMW has a new hybrid “i” series on the market that couples great design and raw performance, too. The days of making a sustainable automobile by retrofitting an old diesel Mercedes to run on spent cooking oil are long over.

Motorcycles, motor scooters and mopeds have always served as practical transportation solutions and are cheap, easy to maintain, and use minimal resources to manufacture and run when compared to individually owned automobiles.

Lito Green Motion, out of Longueuil, Quebec, has recently helped shake up all of these perceptions by shattering performance standards and design expectations with its “zero-compromise electric superbike.” The Sora, like Tesla, is hell-bent on dismantling perceptions through performance, not compromises or downgrading. 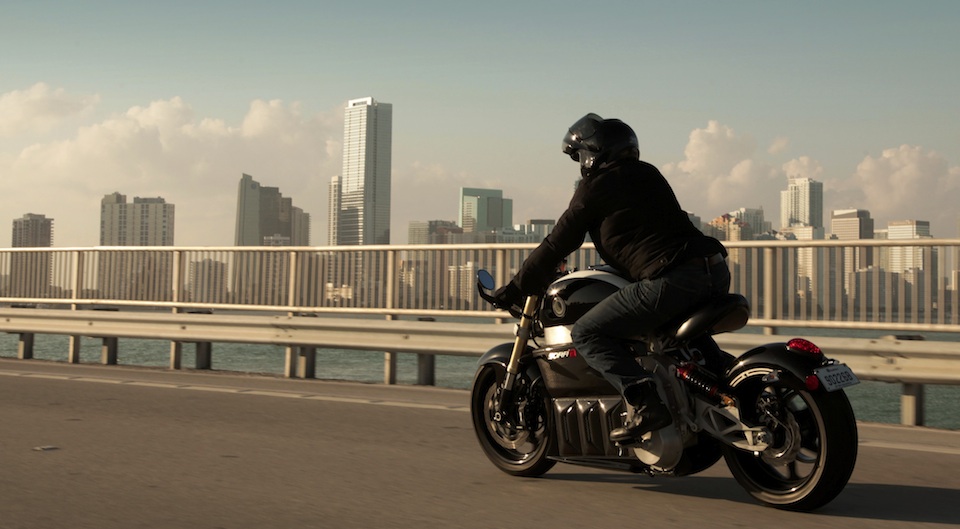 The Sora is powered by an electric propulsion system that was designed to work with a complex power management system. The system relies on computer controls and precise battery management. The Sora is driven by a liquid-cooled 3-phase AC induction motor that derives its power from 12 kWh lithium-polymer battery modules. The all-electric Sora can achieve a top speed of 190 km/h (118 mph).

The Sora’s design vibe is one part batmobile and one part transformer.

Some of the Sora’s sustainable design strategies include reducing body mass and weight by using carbon fiber fairings and an aluminum chassis to help compensate for the extra battery weight. Minimizing environmental pollutants in the manufacturing process and adhering to a clear mission to reduce fossil fuel consumption round out a product that is as good environmentally as it is badass on the streets.

The Sora’s design vibe is one part batmobile and one part transformer. The bike has the ability to adjust to fit the needs and body type of its rider and can be placed in a variety of different mode using the world’s first electric motorcycle seat, which allows the driver to completely change the driving dynamics of the bike with the push of a button.

Lito also has developed a sophisticated power management system that uses three different control modes – performance, normal and safe range. Riders can plug in a destination and manage the amount of energy required to ensure they do not get stranded in transit when in safe mode or blaze away at up to 190 km/h if they choose.

Why should people who want to be more responsible have to sacrifice performance and great design?

There are other motorcycle manufacturers who are also testing the hybrid electric motorcycle waters who show promise, such as Bultaco from Spain and Mahindra from India – who are even establishing a factory in job-starved Michigan as part of their marketing strategy – but the Sora is simply the best, and a true beast of a bike. This is no Vespa, nor is it a hybrid version of an existing motorcycle.

I am hopeful that Quebec’s Sora will do for the electric motorcycle market what Tesla did for the performance auto market. Converting the Maserati and Ferrari types to electricity was Tesla’s goal, and then the cheaper versions will follow while the technology evolves. Why should people who want to be more responsible have to sacrifice performance and great design? Sora means sky in Japanese, and perhaps that’s the limit for Lito Green Motion’s impact in the motorcycle market.