Imagine you’ve just opened your eyes, and you’re in the hospital. You’ve had surgery after a catastrophic heart attack. You’re lucky to be alive.

A nurse comes to check on you. “Oh, you’re awake,” he says, then promptly puts you in a wheelchair, pushes you beyond the sliding doors, and leaves you. Your care – and your health coverage – is over. You’re on your own.

Imagine you’ve just opened your eyes, and you’re in the hospital. You’ve had surgery after a catastrophic heart attack. You’re lucky to be alive.

A nurse comes to check on you. “Oh, you’re awake,” he says, then promptly puts you in a wheelchair, pushes you beyond the sliding doors, and leaves you. Your care – and your health coverage – is over. You’re on your own.

This sort of treatment is unthinkable for a human, but this what it is like for endangered species in today’s world – even ones that are legally protected. As soon as the health of a species has stabilized, starts to show signs of improvement, or even if deterioration has merely slowed, they usually lose this protection. As you might expect, though, a relapse back into critical condition isn’t difficult. As it turns out, this entire problem hinges on one seemingly simple word: recovery.

The word recovery denotes the process of improving health with an end goal of reaching a recovered state. However, when it comes to conservation, governments and academics alike conflate the process of recovery with the state of being recovered.

This can lead to the bizarre situation of having a species still in decline actually being assessed as not at risk and losing its protected status. A particularly dire example is the Rusty Blackbird. When its status was assessed in Canada, it was assigned ‘Special Concern.’ Species of Special Concern don’t receive legal protection the way that Threatened or Endangered species. The rationale for this was that though declines were ongoing, they were slower than rates of decline in the past. However, the overall loss of Rusty Blackbirds is somewhere between 90 and 99%. That’s still millions of birds dead – they just happen to be dying more slowly. The situation is much like having an active cancer, but stopping treatment as soon as growth has slowed, and resuming once it becomes aggressive again. This might qualify as “in recovery,” but it certainly isn’t a recovered state.

With no common understanding of either recovery or recovered, there is also no framework to guide the recovery of species at risk. There is no universal definition of what recovery looks like and no way to compare recovery plans. Quite simply, there is no way to know what conservation methods lead to species reaching a recovered state. Species at risk legislation also often omits any discussion of recovery at all. The outcome: ad-hoc global attempts at recovery that have little success, leaving vulnerable species in trouble despite our best efforts to help them.

Conservation organizations and policies were set up to prevent species extinction, but their approach isn’t complex enough. Conservation isn’t just about preserving single species. It is about maintaining healthy populations and healthy ecosystems that can fill ecological niches and contribute ecosystem services such as clean water, pest control, and waste management, to name but a few. We need healthy populations functioning in their ecosystems, not a handful of organisms clinging to life support.

The present situation is not only failing to protect species that are still in trouble, but is wasting the potential of the millions of dollars that go into much-needed conservation work each year. That’s why my colleagues and I have proposed a new framework to assess species and make sure they are actually in a sustainable healthy state before they become unprotected. 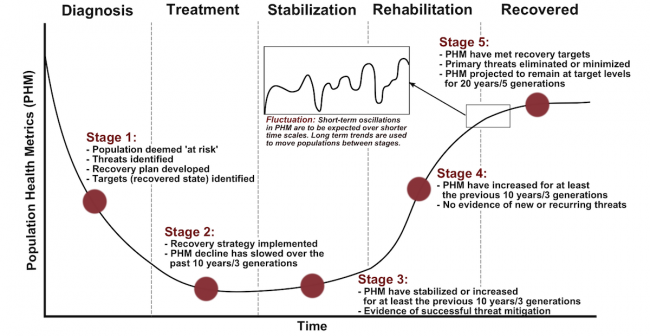 Right now, protection often ends at what would be stage two of this framework.

This new framework has five stages: diagnosis, treatment, stabilization, rehabilitation and recovered. What constitutes a recovered state for a particular species needs to be defined during diagnosis, based on the best available science. Like a patient in an ER, species at risk need to be monitored throughout the recovery process, until they are finally assessed as reaching a recovered state. Just as we wouldn’t send a patient who had open heart surgery home as as they open their eyes, we can no longer simply perform triage on a species and send them on their merry way once they are no longer at imminent risk of extinction. As with any patient, we need to follow up: measure, monitor and quantify their recovery until we are sure they are safe. We cannot take their recovery for granted.

Not only do we owe this much to them, but we owe it to ourselves. By seeing endangered species all the way through on their road to recovery (and by acting before populations reach an endangered state), our conservation dollars are spent more effectively. And we have a better chance of maintaining healthy ecosystems, on which the survival of our own species is dependent.

Alana Westwood is a Ph.D. candidate doing endangered species research in Nova Scotia. She was a member of the 2012 Canadian Youth Delegation to the UN climate change conference in Qatar, and you can follow her goings-on at www.alanawestwood.com.