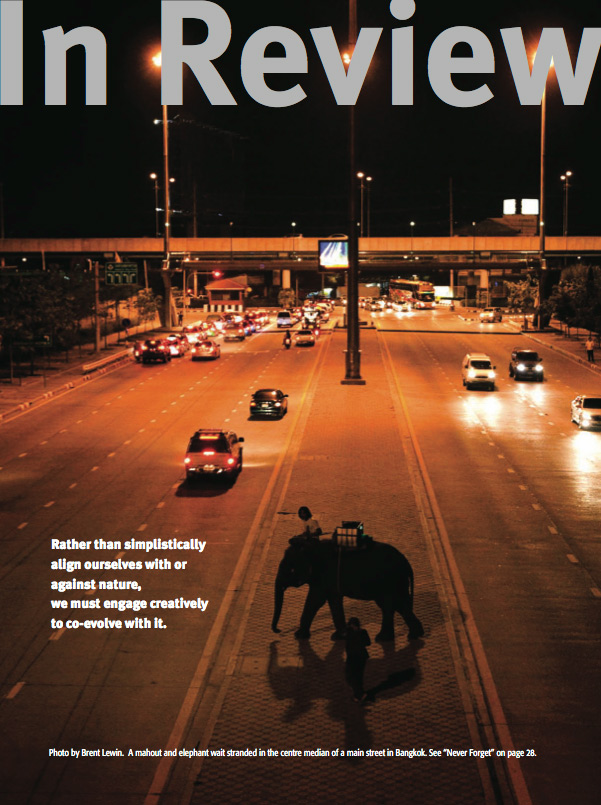 The Ptarmigan’s Dilemma: An Exploration into How Life Organizes and Supports Itself,
John and Mary Theberge.

If I were asked by a visitor from outer space for the best information on the history and ecology of life on Earth, I’d offer this book. Deservedly short-listed for the 2010 Writers’ Trust Non- Fiction Prize, The Ptarmigan’s Dilemma covers all the bases, bridging the authors’ decades of research into animal ecology and their many engaging encounters with animals. Their belief that science matters if we are to learn to live harmoniously with nature is illustrated by their investigations of the adaptive musicology of birdsong, and why sagebrush proliferates in pastured grassland. The writing is first rate, often lyrical and joyful.

This is a wondering, questioning book, buoyed by the married authors’ relentless curiosity about how life “kaleidoscoped through the ages to arrive at what we have today.” How do ptarmigan mothers make critical decisions in raising their chicks? Why do some animals gather in herds or flocks? How does life organize and sustain itself? Does an “underlying commonality” account for success in nature? And – more sombrely – how close are we to ecological catastrophe due to human abuse?

The book begins with the basics: genetics, evolution and environmental adaptation. The Theberges then introduce us to higher levels of organization (populations, ecosystems and the biosphere) by considering “that cunning, cruel, magnanimous force – natural selection.” We are left with a deeper understanding of the resilience of healthy natural systems, but also their vulnerability to human muddling and destruction. “Just one environmental bullet can kill us,” the Theberges warn. “We need a way to call off the firing squad, a last-minute reprieve. Is there one?”

Empires of Food: Feast, Famine, and the Rise and Fall of Civilizations,
Evan D.G. Fraser and Andrew Rimas.

Amid a profusion of books on food, University of Guelph associate professor Evan Fraser and American journalist Andrew Rimas provide a unique perspective. With the help of a 16th-century merchant’s journal, the authors examine societies from Mesopotamia and Ancient Rome to Imperial Britain. The common thread: These civilizations crumbled when their food supplies collapsed. What’s more, our current global and ostensibly abundant food system is repeating many of the same mistakes. The authors engagingly highlight lessons from the past and offer solutions for the future.

The World According to Monsanto: Pollution, Corruption, and the Control of Our Food Supply,
Marie-Monique Robin.

This shocking exposé traces the history of agribusiness-giant Monsanto from its toxic past making PCBs and Agent Orange to
its current production of genetically modified seed. French journalist Marie-Monique Robin debunks Monsanto’s claim to be a
“life sciences company” working to reduce hunger and environmental damage. She reveals suppressed science, secret deals and a staggeringly intricate revolving door of government and corporate officials. A must-read for anyone interested in our globalized and corporatized food system.

Bottled & Sold: The Story Behind Our Obsession with Bottled Water,
Peter H. Gleick.

Bottled water outsells every drink in the US except soda pop. Peter Gleick, one of America’s leading voices on water, decries marketing that makes people fear public drinking-water supplies. His book exposes the wrong-headed way that bottled water is tested – in the US, the FDA considers it to be food – and is critical of false health claims made about water that has been “treated” with positive thoughts. It is a readable book that provides some science, history and context to our public water supply and the bottled water phenomenon.

Enlightening for the avid gardener, food activist or those yet to be converted, City Farmer is a refreshing response to the growing literature cataloguing the failures of our current food system. Johnson looks at all angles of “local food” with pragmatic optimism. She describes a sustainable food system, arguing for comprehensive decentralization down to backyards and patios. Johnson cites leading academics and research on Western urban agriculture, but leavens it with practical advice from real urban gardeners.

In stunning photographs and personal testimony, Climate Refugees vividly portrays how people around the world are struggling with climate change. The book lays out the complex challenges this presents to people living in Alaska, Nepal, China and other regions, and gives a basic overview of the science behind the problem. However, it offers little analysis and few solutions. Instead, this work by an international collective of journalists puts a personal face on climate change by focusing on a few of the people it is affecting right now.

This young adult novel about the end of oil includes the hallmarks of any teen novel: angst, rebellion, and a girl who sneaks out her window to meet a boy. The characters come of age as the world uses up its last barrels of oil. Dire shortages hit suddenly; gas moves over- night to $100 per gallon from $20; and within weeks, food, fuel and pharmaceuticals are hard to find. Suzanne Weyn describes food riots, a war for oil and the dangers of terminator seeds before the community decides to work towards self-sufficiency. A few points seem cheesy, but this book might answer a few questions for pre-teens wondering why the big fuss over oil.

The Spirit Level: Why Equality is Better for Everyone,
Richard Wilkinson and Kate Pickett

The 2010 updated version of The Spirit Level is a good book for a dark age. It summarizes hundreds of research projects on the impact of income inequality from different countries, and in different US states. It shows that almost everything is affected not by a society’s wealth, but by its equality. The bigger the gap between the rich and poor, the worse things are. The authors say in the preface that they considered calling the book Evidence-Based Politics. Not too catchy, but it would have highlighted the book as a guide to public policy in everyone’s interest, and a welcome alternative to ideologically driven free-market theory. Using simple graphs, the authors show that health problems, delinquency, imprisonment rates, infant mortality and a raft of other ills are higher in less-equal societies, while child well-being, the status of women, waste recycling, innovation, life expectancy and other “good” measures are higher in more equal societies.