The A\J team is taking up Earth Day Canada’s challenge to Act for the Planet by trying out new habits during Earth Month. We’ll be following (roughly) along with the EDC’s list of 30 challenges, and you can follow our progress – and let us know how you’re doing – here on the Sustainable A\J blog! We’ll hear from everyone at A\J on the challenges they’ve tried out (and some things we’re already doing) in weekly blog posts hosted by web editor Emily Slofstra.

The A\J team is taking up Earth Day Canada’s challenge to Act for the Planet by trying out new habits during Earth Month. We’ll be following (roughly) along with the EDC’s list of 30 challenges, and you can follow our progress – and let us know how you’re doing – here on the Sustainable A\J blog! We’ll hear from everyone at A\J on the challenges they’ve tried out (and some things we’re already doing) in weekly blog posts hosted by web editor Emily Slofstra.

Week Two: On your skin

If you didn’t get around to learning about toxins in your products last week, A\J has your back! Our blogger Jessica Burman of Cocoon Apothecary has been working on a series about just this subject matter! Check out her posts on petrochemicals, parabens and fragrance, and stay tuned over the coming weeks for the final two blogs on phthalates and formaldehyde-releasers.

Editor-in-chief Eric: I don’t know how much time I’ve spent squeezing those last remnants of toothpaste out of tubes. I also don’t really know whether the mouthfuls of ingredients on toothpaste packages are actually good for my teeth. I do know that I’ve definitely spent too much time in drug store aisles trying to figure out the dubious differences between brands.

But here’s a more important piece of knowledge: Making your own toothpaste is less time-consuming and confusing (and easily more enjoyable) than any of those other activities. I borrowed a recipe and raw materials from A\J’s own homesteader-in-residence (and associate web editor) Emily Slofstra, and put about five minutes into whipping up a jarful.

Better still, the first brush is a bit like tasting an organic fruit or vegetable – a flavor reality check that clues you in to what you’ve been missing by sinking your teeth into a mass-produced product.

Web Intern Megan: I purchased virgin coconut oil over its refined counterpart, as it contains no chemicals. This is definitely a substance to experiment with. I first used it as a face cleanser, which I found the most successful use. I have super sensitive skin and have a hard time finding cleansers that work well. The coconut oil left my skin super soft and moisturized and I will definitely replace my less natural cleansers with it from now on. I also used the oil as a moisturizer and loved it – however it did take a while to sink in and lose the oily texture so I wouldn’t recommend it as an on-the-go moisturizer.

My last use for coconut oil was my only unsuccessful one. I’ve heard lots about the wonders it can do as a hair conditioner, but I must say, I had no luck. I found it really difficult to rinse out and the oil residue began to harden in my hair and I had to wash it all over again. However, I’m determined to make it work so I can finally replace my drug store conditioners! I think this will take a bit of experimenting; I may have used too much or maybe did not spend enough time rinsing it. Overall, I would seriously recommend working coconut oil into your daily routine. 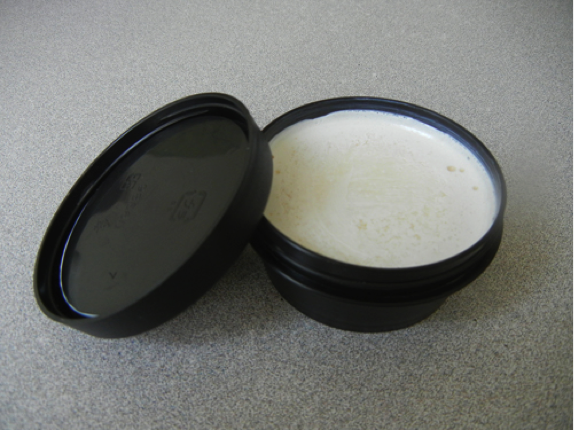 The Green Student Editor Nicole: With summer rapidly approaching, I’m already daydreaming of all the time I will be spending outside! Over the past year I have been slowly replacing my old cosmetics with non-toxic ones, and this challenge seemed like an appropriate next step by making my own sunscreen at home. After some extensive research for a recipe that was easy and safe on the wallet, I chose this one. All of the ingredients required were readily available in my kitchen or bathroom – minus the diaper rash cream. I managed to find an eco-friendly, paraben-free rash cream from Live Clean which brought the SPF strength to around 20. You can also purchase zinc oxide powder to control the SPF strength in your own batch by following a similar recipe. In total it cost me $8 to make about 100g, and the results are heavenly! My roommates could not believe how lovely the sunscreen smelled (thanks to lavender oil) and applied smoothly on the skin. I will definitely be making this recipe again.

Emily: I took this advice to heart two years ago and haven’t picked up a razor since. I did it in the fall so my leg hair could grow out during a pants-wearing season, so if you’ve always wanted to stop shaving your legs but were nervous about getting strange looks, try it now while it’s still chilly and you’re not compelled to put on shorts every day. My roommate has darker hair than I do, so she bleaches her legs every so often to make it less conspicuous.

Emily: I’ve been attending clothing swaps for a few years now, and it’s gotten to the point that at least a third of my clothes used to be Laura’s. If you don’t have friends the same size, or there are no clothing swap meetups in your area, you could also just “swap” with Value Village or another thrift store – unfortunately you tend to have to pay an “exit fee” at such locations, but at least you won’t have to worry about all the insecticides used to produce cotton or where the petroleum in your polyester came from.

Read the full series: In Your Home | On The Move | On Your Plate

Take up the challenge yourself and download the Act for the Planet 30-day checklist and EcoKids ideas.