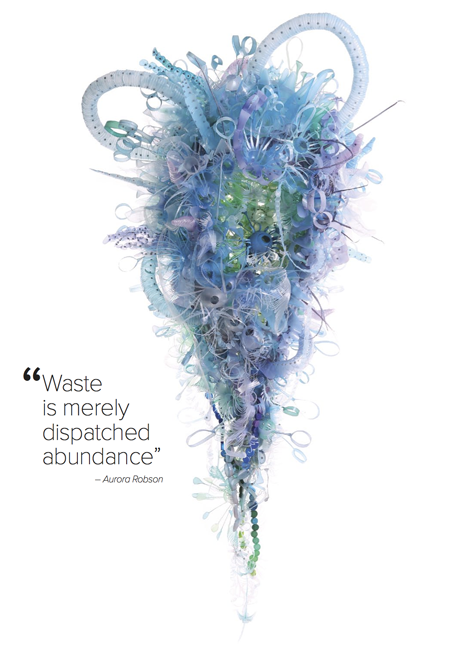 Up Drop (Aurora Robson, 2010) is a 9-foot-tall suspended sculpture
made from plastic debris (PET) intercepted from the waste stream.

Up Drop (Aurora Robson, 2010) is a 9-foot-tall suspended sculpture
made from plastic debris (PET) intercepted from the waste stream.
Photo courtesy of the artist.

Robert Palmer, Lou Reed and even Kenny Chesney have sung about the perils of being “caught in a riptide” as a metaphor for failing relationships, going from bad to hopelessly worse. We have a similar relationship with our own plastic waste. The massive floating blobs of plastic debris collecting in our oceans represent the worst of our thoughtless consumption; our outmoded perception of the ocean as our global toilet needs to end.

The plastic debris we find on our beaches is just a minor symptom of a much bigger problem. Searches for the missing Malaysian Air jetliner were hampered by the massive amounts of debris floating on the surface of the ocean; discerning specific debris was nearly impossible.

Thanks to ocean currents, this refuse tends to collect in higher density in particular areas. These “gyres,” as they’re called, now even have their own names, including the Eastern Garbage Patch (between Hawaii and California); the Western Garbage Patch (off the coast of Japan); and an area between the two known as the Subtropical Convergence Zone (north of Hawaii).

These makeshift barges of plastic flotsam kill fish, birds, and other marine life as they meander and gather mass over time. Their contents are filled with toxic additives that can include carcinogens, obesogens, endocrine disruptors and may be linked to birth defects and neurological problems in humans as well. The Hawaii Wildlife Fund, which organizes beach cleanups on the southern tip of the Big Island of Hawaii, estimates that they have removed about 169 tons of garbage in the last 11 years from a 10-mile stretch of Hawaii Island alone.

Project Vortex was designed to confront the problem of plastic debris through art and design. It is an international collective made up of artists, designers and architects whose projects are intended to “intercept the plastic waste stream in innovative ways.” Born in Toronto, raised in Hawaii, working in New York for the past couple of years, Aurora Robson is the founder of Project Vortex and her own sculptural/installation work occupies a crucial place within the project.

Robson’s work is both magical and fantastic. Her sculptures and installations turn toxic plastic ocean debris into technicolour candy-floss sea urchins, suspended solar-powered glowing medusas and iridescent intestinal tentacles that mesmerize young and old. But Robson’s work also carefully balances the integrity of the project’s mission with the joy of making. Robson’s art is serious work with a compelling message.

It is Robson’s process that is the most revealing. In her sculptural work, plastic debris is harvested from beaches, cleaned, sorted, hand-cut, airbrushed and then manipulated into new forms that conflate the world of childhood fantasy with the darker reality of environmental degradation. Robson’s work emerges as a postindustrial fairy tale that is both whimsical and menacing, like the classic fairy tales of the Brothers Grimm.

Working with plastic waste is a grim task. Robson speaks about how her work originates in her own childhood nightmares, and I see the spectre of gyres and dying marine life in all of her playful work, looming in the murky background like an innocent gingerbread house hiding a cannibalistic witch within.

Many of the other Project Vortex participants also produce work that seems whimsical and playful on the surface, but still carries the weight of the project’s mission. For example, a jewelry designer spins gold fabric from plastic waste just like a postindustrial Rumpelstiltskin; another artist crochets bikinis, just like her mother taught her, but now using plastic debris; and a pair of young architects make shelters shaped like clouds from discarded plastic water bottles, but shelters from what? It’s all a little too ominous.

Project Vortex is disarmingly sweet, and if I were given the task of making it a musical I would combine Disney’s Frozen with Sweeney Todd as my first step. Sweet and scary would be my mantra.

All of the dark, scary stuff like gyres and strangled marine life is subtly displayed in Project Vortex, continuously present in the materiality and the mission of the work. Like a classic Hitchcock film, the murder weapon is left in plain sight to increase the element of fear and impending doom.

The true potency of Robson’s work, in particular, may be most evident in its lack of sarcasm and snarky cheekiness. Project Vortex is generally earnest and quite sincere. As a result, this collective body of work presents more than just the usual “raising awareness” shtick or “reduce, re-use, recycle” cliché we associate with standard eco-art. The underlying truth is profoundly ugly, and we are all the source of this ugliness.

The point of it all may be that this is just the tip of the iceberg and Project Vortex is simply amassing evidence of a much larger problem that is entirely out of control. Perhaps Robson and her colleagues are just spinning candy-floss out of our worst nightmares to remind us that such whimsical beauty comes at a deeper cost. Maybe Project Vortex will be successful, and all of these artists and designers will no longer work in their chosen medium when plastic debris has been eradicated, and the oceans will no longer hide our leftover greed.