On my first day in the Arctic, I woke up and discovered I had murdered a loon.

On my first day in the Arctic, I woke up and discovered I had murdered a loon.

In fairness, I should mention that I had also murdered twelve lake trout and four arctic char, but these had died in the name of science. We were catching fish in order to learn more about the population levels and how they might respond to increased recreational fishing. The loon wasn’t science, it was an accident – a misplaced dive into the gillnet intended for the fish. We’ll add it to the tally of Arctic animals killed by humans. That’s a relatively short list for the moment, but perhaps not for long.

Settler tales of fish so plentiful they could be scooped up in a bucket are now closer to legend than believable history. The number of unfished Canadian lakes, rivers and streams is ticking downward every year. And even where humans have not had a direct impact, indirect factors such as climate change have been heating bodies of water beyond the comfort zone of many fish.

Meanwhile, Arctic wildlife has remained more or less untouched, and for a pretty good reason: it’s damn cold up there. Few hunters or fishermen want to make the long trek up north only to ignominiously freeze to death in the middle of July. As a result, musk ox, caribou and wolves roam the tundra with impunity, while every body of water is positively teeming with lake trout.

But that’s about to change. In summer 2013, the North Pole melted for the first time in human memory. If you listen closely you can almost hear the hunting bugles ringing in the distance.

I flew into the middle of Victoria Island, north of mainland Nunavut, with a float-plane pilot named Bill. He operates a hunting lodge on the eastern edge of the island and his current guests – five in total – are of a mind to hunt musk ox. It being mid-August, this is as good a time as any to brave the elements. As he’s telling me this over the headset, he points at a brown patch on the ground, 200 feet below. A musk ox bull stands stolidly in the middle of the open tundra. He doesn’t run for cover as we fly directly overhead – possibly because he knows there is no cover for hundreds of kilometres, or possibly because he is stupid: musk ox are essentially cold-weather cows. Hunting them is mainly a matter of spotting them in the vast expanses of the Arctic circle.

Likewise, our unfortunate loon didn’t stand much of a chance against a fishing technique designed to maximize yield. Loons in populated areas are generally very good at spotting and avoiding fishing nets, but it’s possible that alarm bells didn’t go off for this particular loon because he had never seen a net before. That’s hardly a knock on his intelligence: history is littered with the eulogies of entire species that came to regret their initial encounters with humans.

Few of the Arctic’s other predators are able to kill as prolifically as humans, but some do exist. Local wisdom has it that if you can see a polar bear it’s already too late. I’m willing to accept my fate, if it comes to that, but I would likely offer up one of my tastier colleagues first, just to see if polar bears have limited appetites. Float-plane pilot Bill put an end to this notion: “It’s not polar bears you’ll find on this part of the island. It’s grizzlies.”

Apparently Parks Canada hasn’t officially recognized that grizzlies hunt this far north, but another float plane pilot saw one take down a full-grown musk ox. Take that for what it’s worth.

At any rate, bears compete for resources with foxes, wolves and even swans in the Arctic. It looks so barren that nothing lives here, except that I woke up many mornings to find fresh wolf tracks near our campsite. We also spotted more than one fox sniffing around our equipment, searching for the source of the fish smell.

Although they’ve managed for millennia, all populations live on the edge up here, where resources are anything but abundant and mistakes are rarely forgiven. The shifting conditions brought on by climate change have already endangered several species – most famously, the polar bear – and human hunting represents another big shove from behind for a bunch of animals trying their best to balance on the slippery ice.

The tundra is largely flat and surprisingly sandy. It’s pocketed by so many lakes that there may well be more water than land. Just about every depression in the earth is filled with water, and anything containing water here also contains fish, which could easily give one the impression that they generated spontaneously and simultaneously out of a million mucky lake bottoms. Actually, both lake and ocean fish have the same benefactor: glaciers. The glaciers melted more than 10,000 years ago, spreading water and fish across the landscape like one might fill an ice cube tray. The lakes are now replenished annually by melting summer snow. The fish continue – by all appearances – to thrive.

The region has some military and economic importance as well, although this is not likely to manifest itself in any kind of conservation policy.

Cambridge Bay, at the southern tip of Victoria Island, is in a state of disrepair that forces visitors to confront the naked poverty of its mostly Inuit community. That is, if anyone were there to visit. This is the site of the federal government’s proposed high-Arctic research station – that quasi-scientific excuse to plant a Canadian flag near what might become a major shipping route if the ice continues to melt.

Just outside the city runs the Defensive Early Warning (DEW) line, a length of wire connected to intermittent bright-orange barrels, strung out across the stark, barren landscape. NORAD pays fairly close attention to this line from bases in Winnipeg and Denver, Colorado. NORAD also gets a little bored from time to time. I know this because float plane pilot Bill received a slightly agitated call on the radio asking him to kindly move to a frequency where NORAD could confirm that his single-engined Beaver was not a very slow-moving missile.

Cambridge Bay may be in for a future facelift, but for now it’s a convenient staging area and supply-replenishing hub for expeditions further north. If the town itself is a dump, then the actual dump defies all description. And if these are the conditions under which the government is content to allow the Arctic’s human population to live, at the epicenter of their regional strategic interests, I don’t hold out much hope for the animals.

Then the blizzard hit. Between the vulnerable animals and mild weather I had to admit that I had allowed myself to believe in a narrative of a defenceless wilderness at the mercy of nature-conquering humans. I contemplated the hilarity of this assumption as I dragged my broken and mangled tent like the carcass of some wild beast over frozen Arctic hill and plain to the beach campsite. 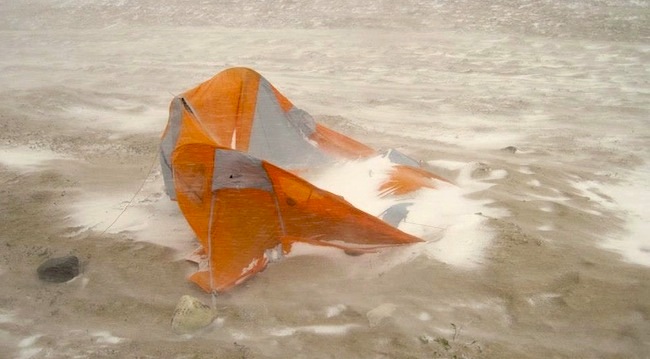 The previous afternoon, sustained gale-force winds descended suddenly on our research team while out on a lake, where wind, driving hail and plummeting temperatures would make boating in a tiny Zodiac a harrowing experience. We cut short our day’s research only to find that the sand had been busily at work on a reclamation project while we were away, taking the beach back for itself by burying our tents and collapsing them under the unrelenting wind. My tent, being furthest upwind, was being driven so hard into the ground that I couldn’t even find the doorway. I had to sleep elsewhere. At least, I thought to myself, it won’t be going anywhere with my heavy gear inside it, this mountain of wet sand and snow on top of it, and a variety of heavy rocks holding down the pegs for good measure.

The tundra laughs at such hubris.

Having apparently seen enough of the lake shore, the tent packed itself up and left on its own around 4am that night, aided and abetted by the 100km/h winds that had pummeled us for more than 36 hours.

When I found it the next morning, my tent was cheerfully relaxing, like a grazing musk ox, in a field some three quarters of a kilometre away. Upon interrogation, it would reveal no details on how it had engineered the escape. And so I found myself pulling it along behind me, wondering how I could possibly have thought the Arctic needs defending.

Our research mission was to gage the growth rate of lake trout, thus providing the raw data for stock assessments and fishing quotas that don’t yet exist – all of this being predicated on the idea that a melting Arctic is vulnerable to being plundered and ruined. Three days of endless blizzard in the middle of summer was enough to prove the point that the 72nd parallel is still not Havana, but nature continued with no sense of decency or restraint. The float plane couldn’t land in this weather, so we battened down the hatches as best we could, nervously counting our remaining meals and waiting for one of nature’s more benign moods.

Meanwhile, I was left with nothing to do but imagine how warm and secure the musk ox must be, given that they cope with even worse weather in the winter. In that moment, I hated them for their serenity. 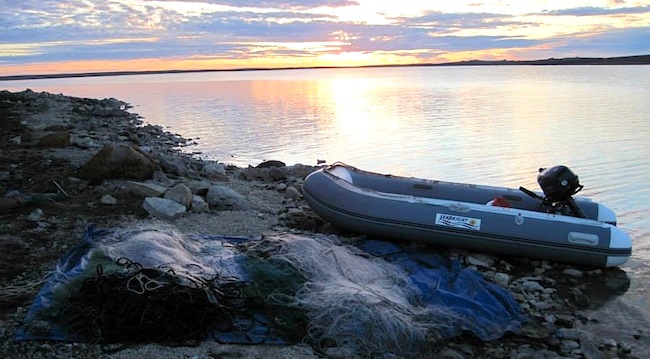 The lake trout are pretty relaxed in cold temperatures as well. Like many cold-water species, they have an extremely slow growth rate when adapted to frigid temperatures. Our concern is that this slow growth and reproduction will mean that population levels cannot recover from any serious recreational fishing enterprise, let alone a commercial one. They are in essence a non-renewable resource. However, they are perfectly safe in a hurricane. My research team, on the other hand, was delighted to receive an extraction via float plane on the third day of the storm.

Shielded by tumultuous Arctic weather, local wildlife is able to thrive – or at least scratch out a living – under conditions that, shall we say, “discourage” human interference. Those safe conditions aren’t all the way gone yet, but they’re slipping. If they slip far enough, I worry that the carefully adapted serenity of the musk ox, trout and others will be their undoing. It might not be long before the tundra is really as barren as it looks.