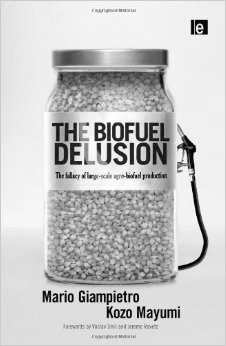 Many people believe that growing our fuel will improve energy security and independence, reduce greenhouse gas emissions and promote rural development. The Biofuel Delusion contends that such perceived advantages are quite simply not the case.

Authors Mario Giampietro and Kozo Mayumi dedicate much of this book to energetics – an area of study that considers the feasibility and desirability of energy sources, and how they may affect the structure of society. To determine the feasibility of a new energy supply, for example, researchers use the Output- Input (OI) ratio, which determines how much net energy the new source provides society, once we have subtracted the energy spent to obtain it. An OI of 1.0 indicates an energy supply that uses up all its energy to produce itself, and therefore has no surplus energy. Giampietro and Mayumi suggest that an OI below 3.0 is not worth the effort in energetic terms. Most fossil fuels range from an OI of 13 to 20, while US corn ethanol is often calculated at roughly 1.1 (ouch!) and Brazilian sugarcane ethanol at about 7.

Energetics also involves the study of the amount of energy produced by an energy supply for every hour of human labour devoted to its production. Developed societies are predicated on obtaining fantastically high labour productivity from the energy and agricultural sectors. The US, for example, requires 47,000 megajoules (MJ) of net energy for every hour of labour in the energy sector. By contrast, the energy-labour productivity of US corn-ethanol and Brazilian sugarcane-ethanol are both below 400 MJ per hour. To produce three per cent of US fuel needs from ethanol would require an unbelievable 48 per cent of the country’s workforce, after absorbing all the unemployed. If only producing energy was as much fun as consuming it.

After providing a crash course in energetics, the authors set their sights on agro-biofuels directly. They suggest that biofuels cannot possibly produce energy in sufficient quantity, nor with sufficiently high labour productivity, to meet the requirements of complex society. Given the low OI ratio of biofuels, there is simply not enough land for it.

To further their point, Giampietro and Mayumi argue that large-scale biofuel production will perpetuate the industrial-agriculture paradigm, thereby further decaying rural society (rather than promoting it, as some claim). Does this mean that all bioenergy is bad? No. But the authors suggest that we need to at least ensure that any reliance on bio-energy meshes with the structure and function of our society, and vice versa.

The Biofuel Delusion concludes with an answer to the key question: How did we ever get so deluded in the first place? To address it, Giampietro and Mayumi introduce the notion of post-normal science. It holds that the scientific explanations we employ to explain the world will always coincide with the “hegemonic group ruling the society in which the science is developed.” In other words, “sustainability has always been framed as the preservation of the pattern of activities associated with the form of civilization defined as relevant by the storyteller.”

In Western society, the “storyteller” is addicted to a lifestyle dependent on fos- sil fuels. Within that frame of reference, our scientific community is sometimes so focused on precision that we lose sight of social relevance. For example, determining whether an OI is 1.0, 1.1 or 1.2 is a fool’s game since all OI’s less than 3.0 are physically and socially unfeasible. In those cases, argue the authors, scientific precision doesn’t matter.

Giampietro and Mayumi pull no punches in their critique of the powerful forces in industrial agriculture that are pushing for biofuel production. The book courageously exposes some of the ugly ways that science and politics have been framed in order to serve vested interests, rather than society at large.

There is one drawback to this book: The Biofuel Delusion is simply smarter than you. It will beat you in chess, no contest. Understanding energetics, even at a beginner’s level, is daunting. However, when you put this book down, after reading it twice, you will appreciate the complexity of an immensely critical challenge facing humankind. That alone is worth the effort.

Lndwdi1wYWdpbmF0aW9uLW5hdi1saW5rc1tkYXRhLXRvb2xzZXQtdmlld3Mtdmlldy1wYWdpbmF0aW9uLWJsb2NrPSJjZGZkNGM0NzM3YjI4OThlYmE0NDQzZGQ1OWExYmY1MCJdIHsgdGV4dC1hbGlnbjogbGVmdDtqdXN0aWZ5LWNvbnRlbnQ6IGZsZXgtc3RhcnQ7IH0gICBoMi50Yi1oZWFkaW5nW2RhdGEtdG9vbHNldC1ibG9ja3MtaGVhZGluZz0iYTRiMmE5MzQ1ZWQ2YTJjM2EyM2U0Y2U5NzZhMDgyZmEiXSAgeyBib3JkZXI6IDFweCBzb2xpZCByZ2JhKCAwLCAwLCAwLCAxICk7IH0gICAgQG1lZGlhIG9ubHkgc2NyZWVuIGFuZCAobWF4LXdpZHRoOiA3ODFweCkgeyAgICAgICB9IEBtZWRpYSBvbmx5IHNjcmVlbiBhbmQgKG1heC13aWR0aDogNTk5cHgpIHsgICAgICAgfSA=
Kyrke Gaudreau
Lndwdi1wYWdpbmF0aW9uLW5hdi1saW5rc1tkYXRhLXRvb2xzZXQtdmlld3Mtdmlldy1wYWdpbmF0aW9uLWJsb2NrPSJjZGZkNGM0NzM3YjI4OThlYmE0NDQzZGQ1OWExYmY1MCJdIHsgdGV4dC1hbGlnbjogbGVmdDtqdXN0aWZ5LWNvbnRlbnQ6IGZsZXgtc3RhcnQ7IH0gICBoMi50Yi1oZWFkaW5nW2RhdGEtdG9vbHNldC1ibG9ja3MtaGVhZGluZz0iYTRiMmE5MzQ1ZWQ2YTJjM2EyM2U0Y2U5NzZhMDgyZmEiXSAgeyBib3JkZXI6IDFweCBzb2xpZCByZ2JhKCAwLCAwLCAwLCAxICk7IH0gICAgQG1lZGlhIG9ubHkgc2NyZWVuIGFuZCAobWF4LXdpZHRoOiA3ODFweCkgeyAgICAgICB9IEBtZWRpYSBvbmx5IHNjcmVlbiBhbmQgKG1heC13aWR0aDogNTk5cHgpIHsgICAgICAgfSA=
Kyrke Gaudreau is the Sustainability Manager at the University of Northern British Columbia. Dr. Gaudreau completed his PhD in social and ecological sustainability at the University of Waterloo where his research focused on the sustainability assessment of energy systems. He has consulted on various strategic and environmental assessments of energy systems in Canada, and has researched and written about energy systems sustainability in several different countries.